New from the Unintentional Irony department, we have: Alex Jones of InfoWars is launching an effort to combat fake news on the internet. 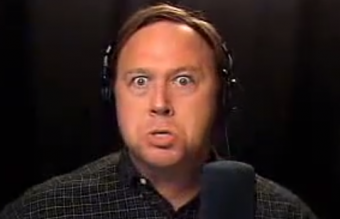 I bet you thought I was going to say "okay, I made the last one up."  Ha, shows you what you know.  Also shows you how completely batshit insane Alex Jones is.

"We are launching a fake news analysis center to combat lies and fake stories being pushed by the mainstream media," Jones said in his radio show this week.  "What’s happening is very, very simple.  Mainstream dinosaur discredited media that have fake pollsters and fake media analysts and all the disinformation that’s been totally repudiated and proven to be a lie — they weren’t wrong, they were congenital liars on purpose — they're now desperate attempt is to flood the web through third-party sites they control with so much fake news and disinformation that it discredits the entire web itself, and then they will preside over the false flag they’ve staged and claim that they can only be trusted."

It's not that I don't think that fake news is a problem, as anyone who read my post from two days ago knows.  It's more that putting Jones in charge of deciding what constitutes disinformation is a little like the Scientologists running a cult awareness help center.

Interesting too that in the same radio show, Jones made the claim that "three million votes in the U.S. presidential election were cast by illegal aliens, according to Greg Phillips of the VoteFraud.org organization.  If true, this would mean that Donald Trump still won the contest despite widespread vote fraud and almost certainly won the popular vote.  'We have verified more than three million votes cast by non-citizens,' tweeted Phillips after reporting that the group had completed an analysis of a database of 180 million voter registrations."

Phillips himself is no newcomer to such claims.  In 2013 he claimed in an article in Breitbart that the 2012 election was "the biggest voter registration fraud scheme in the history of the world."  Funny, then, that independent non-partisan poll monitoring agencies have found no instances of voter fraud in either the 2012 or 2016 elections.  The only "voting irregularities" this time around were caused by machine failures and human error, and amounted to less than a thousand votes nationwide -- i.e., not enough to make a difference.

But that doesn't fit the narrative that the government is being run by an evil cadre of all-powerful Illuminati who will do anything to stay in power.  So Phillips is right, q.e.d.

So anyhow, it's oddly reassuring that Alex Jones isn't going to give up his loony version of reality just because his Golden Boy (or Orange Boy, as the case may be) is now the president elect.  And the fact that he's set himself up as the arbiter of what's real and what's fake is perhaps unsurprising.  We can look forward to many more missives from InfoWars about the "mainstream dinosaur discredited media," so I guess that means I will be tirelessly pursuing stories for Skeptophilia for a while longer.  Especially once this "horny goat weed" starts to kick in.
Posted by Gordon Bonnet at 1:54 AM