Five channels plus the facts

Social psychologist Jonathan Haidt of New York University has pioneered research into what he calls the "five channels of morality" -- the five foundations of human morals and ethics worldwide.  These are compassion/harm, fairness/cheating, in-group loyalty/betrayal, authority/subversion, and purity/degradation.

As Haidt describes in a wonderful TED talk called "The Moral Roots of Liberals and Conservatives," liberals tend to have a "two-channel" model of morality (placing emphasis on compassion and fairness) whereas conservatives have a "five-channel" model (placing nearly equal emphasis on all five moral bases).  (And if you decide to listen to his talk, especially those of you of the conservative persuasion, don't get pissed off and shut it off after the first five minutes -- because it sounds like he's hammering on the conservatives at first, but takes a rather surprising right-hand turn halfway in and makes a powerful point that we all have something to learn from the other side.)

Four researchers at Cornell University have used Haidt's model to analyze why some people are so reluctant to take action on climate change, and to see if there's a way to frame the problem that might be more successful at convincing the folks who are currently sitting on their hands.  Janis Dickinson (Natural Resources),  Poppy McLeod (Communication), Robert Bloomfield (Management and Accounting), and Shorna Allred (Natural Resources) released a paper last week in PLOS-One called, "Which Moral Foundations Predict Willingness to Make Lifestyle Changes to Avert Climate Change in the USA?"  Their research found, perhaps unsurprisingly, that an identification with morality based on compassion and fairness predicted a desire to act on climate change, whereas an emphasis on in-group loyalty, authority, and purity predicted a reluctance to act.

The unsurprising part is that, by and large, the liberals have been pushing for action for years and the conservatives resisting it.  (An overgeneralization, I realize, as there are exceptions on both sides, but it's largely true.)  And since Haidt showed that the two-channel model corresponded to a liberal outlook and the five-channel model a conservative outlook, it's not to be wondered at that the correlation holds with respect to climate change.

What I still don't get, however, is why so many conservatives still don't believe in climate change.  I mean, consider it this way.  Suppose there's good reason to believe that there's a violent intruder, bent on causing you harm, in your house.  There are various courses of action you could take -- hide, flee, fight back, call the police -- but under no circumstances is it helpful, or even logical, to pretend that the intruder doesn't exist.

This seems to me to be the stance being taken by the vast majority of the conservatives currently in congress, not to mention the leaders of the incoming administration.  The evidence is at this point completely incontrovertible; not only is the world warming and the climate destabilizing, but the cause is fossil fuel burning, and we are fast approaching a point of no return, if we haven't already gotten there.

Consider just one metric, which is on my mind because the latest report just came out a few days ago -- the extent of polar sea ice.  The Cryospheric Science Laboratory at NASA announced that both the Arctic and Antarctic ice pack are currently at record lows -- and that air temperatures in the Arctic, in November, are 35 degrees above average.

Yes, you read that right, and it's not a typo.  Last week it was raining near the North Pole, in November.

The climate scientists themselves are in no doubt about what this all means.  "The interaction between Arctic ocean temperatures and the loss of ice formation leading to continuing record minimums is clearly a climate change signal," said Thomas Mote, Professor of Geography at the University of Georgia. 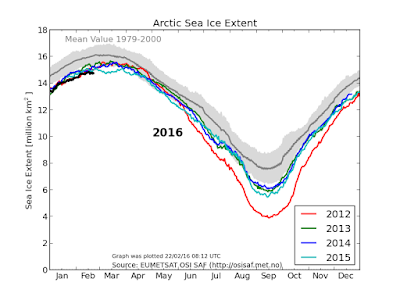 I can understand, even if I disagree with, the stance that we shouldn't act on climate change.  The arguments could be from the standpoint that divesting from fossil fuels would destroy our economic infrastructure, that renewables aren't currently set to take up the slack and/or would be too expensive to install on a national scale, or even that it's too late to do anything anyhow.  I've even heard people (Matt Ridley comes to mind) say things like "humans have weathered much worse than this before now, we'll be fine."

All of those things we can talk about.  They're a little like deciding what's the right approach to the intruder in my earlier analogy.  But the stance that congressional leaders like James Inhofe, Lamar Smith, and Dana Rohrabacher are taking is not to question what we should do about climate change, but to question whether it's happening at all.

And that, honestly, has nothing to do with Haidt's "five-channel" model of conservative morality.  That's simply insane.

I do think that the research by Dickinson et al. is valuable in that both conservatives and liberals have a lot to learn about talking to each other in a way that the other side will understand and respect.  In many ways, neither side speaks the other's language.  But at some point, there's the issue not simply of talking policy, but taking the attitude that what the science tells us is true.

And that is neither conservative nor liberal nor anything else.  Despite what the politicians would have you believe, scientific facts have no spin.
Posted by Gordon Bonnet at 1:59 AM