Being a linguistics geek, I've always been fascinated with the mechanisms of communication.  My interests span such topics as the evolution of human language, how one language (or culture) influences another (the topic of my master's thesis), the question of how we would understand language in a signal from an extraterrestrial intelligence, and whether vocal communication in other species is actually language.

The conventional answer to the last question has usually been "no."  Language, as defined by linguistics, is "arbitrary symbolic communication."  The arbitrary part is because except in certain rare cases, such as onomatopoeic words ("pop," "splat," "bang," etc.), there is no logical connection between the sound of a word and its referent.  Except in our minds, there is nothing especially doggy about the sound of the word "dog."

So is vocal communication in other animals language?  The singing of songbirds is clearly communication, but it lacks one important characteristics of human language; the flexible productive ability of language to communicate different concepts in different contexts.  Birdsong is for the most part (within a species) limited in range to a few different sounds, and once learned, never changes.

Some species, however, get closer to language than that.  Some birds, notably corvids, have a wide range of vocalizations, and are also some of the most intelligent birds.  Dogs vary their tones depending on context -- I can tell from the tone of my dog's barks whether he's seen a squirrel, someone's knocked on the front door, he wants to be let in, he's hungry, or my wife's just come home.  One step closer are whales and dolphins, whose vocal communication appears to be complex and responsive -- but whether it qualifies as true language is an unsettled question.

However, a new study, which appeared this week in Frontiers in Behavioral Neuroscience, suggests that human language may not be as far removed from vocalizations in other animals as we may have thought.  The paper, entitled "A FOX-P2 Mutation Implicated in Human Speech Deficits Alters Sequencing of Ultrasonic Vocalizations in Adult Male Mice," by Jonathan Chabout, Erich D. Jarvis et al., has shown that mice have the "Forkhead Box Protein 2" (FOX-P2) gene, just as humans do -- and a mutation in that gene impairs vocal communication in mice, just as it does in humans. 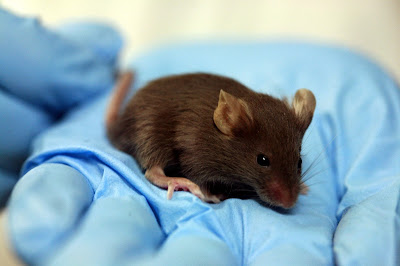 "This study supports the ‘continuum hypothesis,’ which is that FOX-P2 affects the vocal production of all mammals, and not just humans," Jarvis said.  "Mice do not have the complex vocal learning behavior of humans and song-learning birds.  Nonetheless, we find that the same FOX-P2 mutation in mice and in humans leads to overlapping effects on sequencing of vocalizations. In particular, against a background of preserved syllable acoustic structure, we see reductions in the length and complexity of syllable sequences."

I find this fascinating, because I've always been of the opinion that there's a lot more going on inside the brains of non-human animals than we've typically been willing to acknowledge, and a great deal more similarity than difference between human cognition and cognition in other mammals.  So in a way, I find this result unsurprising.

But still, what was drilled into me in my college linguistics classes -- that humans were the only animals that had language, and that there was a hard-and-fast divide between the vocalizations of humans and those in other species -- was a surprisingly deep-seated bias.  It's one I'm glad to jettison, however.  My other geeky passion is evolutionary biology, so the idea that there is an unbroken continuum in the animal world in terms of what we have to say, and the genetic underpinning thereof, is pretty damn cool.
Posted by Gordon Bonnet at 4:09 AM