You know, there are things humans used to do that we've stopped doing, and usually it's for a good reason.  Bloodletting in order to cure infectious diseases, for example.  You would think this would have gone out of vogue sooner than it did, given that the treatment so often had the unfortunate side effect of death.  But these were the days before malpractice lawsuits, so perhaps that explains it.

The problem is, there's a mystique connected to stuff our ancestors did, and a whole "back to our roots" movement amongst people who apparently have an inordinate fondness for surgery without anesthesia and no indoor plumbing.  The idea is that we need to jettison three hundred years of scientific advances, which have made us the longest-lived and healthiest human society the world has ever known, simply because it sounds appealing to do things "the old way."

As an example of this, take the whole "raw milk" phenomenon.  The idea is that the nasty technological processes of pasteurization and homogenization are screwing up the nutritive value of milk, and we need to be going back to the straight-from-the-cow stuff.  This conveniently ignores the fact that the two processes, especially pasteurization, were invented to increase the shelf life of milk and to prevent the consumption of dairy products from being an avenue for such unpleasantness as cryptosporidium, shigellosis, and TB, which used to be a serious problem.  People forget that those diseases have declined not only from the use of antibiotics to treat them, but a combination of better farming practices and higher food safety standards to stop them from spreading in the first place. 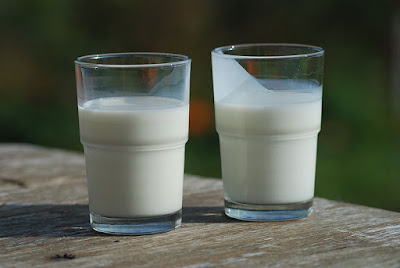 Which is something that a couple in Australia should have been told before they gave their three-year-old son raw milk that had been approved as a "milk bath" but had big "NOT SAFE FOR HUMAN CONSUMPTION" and "FOR COSMETIC PURPOSES ONLY" messages on the label.  But to hell with that, right?  "Raw" means "natural" and "natural" means "good."  After drinking the raw milk, the little boy developed an E. coli infection that led to blood sepsis and thrombotic microangiopathy, which is as horrible as it sounds.  Symptoms include kidney failure, high fever, and poor blood clotting.  It's almost always fatal.

Which it was in this case.  The child died on October 4.

Under Australian law, the parents apparently can't be prosecuted, although you have to wonder what constitutes negligent homicide if this doesn't.  On the other hand, the case has prompted authorities to propose a new law that will fine someone $60,000 if (s)he knowingly gives someone a product to eat that is labeled as unsafe for human consumption.

Which, of course, is too little and too late for the child, who died solely because his parents are back-to-the-earth morons who have never heard of the naturalistic fallacy.

I know that makes me sound unfeeling, but for fuck's sake, a little boy died here.  If you want to give up technology and medical advances and go live in a yurt in the woods, knock yourself out.  But to visit your Luddite tendencies upon a child who has no voice in the matter is nothing short of child endangerment.  And apparently they're not the only ones who've done this.  Drinking raw milk -- including milk certified for cosmetic use only -- is becoming commonplace, despite the fact that it can be associated with severe health problems.  (Four other children in Australia were hospitalized in the past year with hemolytic uremic syndrome, a complication of E. coli infection, from drinking raw milk.)

The advances we've made in science are called "advances" for a reason.  Yes, I know they have come with tradeoffs -- from pollution to the profit motive -- but on balance, there is a good reason that our average life expectancy is over twice what it was in the Middle Ages.  Childhood mortality is extremely low, and hundreds of diseases that were death sentences a century ago are now completely treatable.

So if you think it's a good idea to jettison all that, that's up to you.  But don't bring your kids along on the ride.
Posted by Gordon Bonnet at 2:07 AM