Despite my daily perusal of the news and science sites for interesting topics, sometimes I miss stuff.  It's inevitable, of course, but sometimes a story is so absolutely tailor-made for this blog that I can't believe that (1) I didn't see it, and (2) a reader didn't send me a link.

That was my reaction when I ran into, quite by accident, an article from Scientific American nine years ago about a researcher in the Netherlands who did a psychological study of people who believe in reincarnation.  I've always found the whole reincarnation thing a bit mystifying, especially given that most of the people you talk to who claim past lives say they were Spartan warriors or Babylonian princesses when, just by the numbers, the vast majority of people should recall being Chinese peasants.  Or, if you allow reincarnation from other life forms, being a bug.

But no.  "Boy, life sure was boring, when I was a bug" is something you rarely ever hear reincarnated people say. 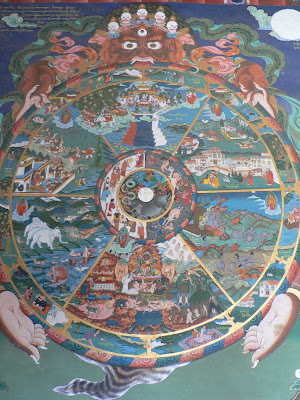 The Wheel of Life [image courtesy of the Wikimedia Commons]

Be that as it may, there are some people who believe fervently that they were once someone else, somewhere else.  So Maarten Peters, a psychological researcher at Maastricht University in the Netherlands, decided to see if he could figure out what was going on.

He asked for people who believed they could recall past lives to volunteer, and an equal number of people who did not believe in reincarnation, and gave them a test called the false fame paradigm.  This test gives subjects a list of unfamiliar names to memorize, and then the next day those names are mixed in with new names and the names of famous people.  The question was: which of the names presented belong to famous people?

When he compared the results, an interesting pattern emerged.  The people who believed in reincarnation were, across the board, more likely to commit a source-monitoring error -- an error in judgment about the source of a memory.  They were far more likely than the control group to think that the unfamiliar names they had memorized the previous day belonged to famous people.  Evidently, they had a marked tendency to conflate their own (recent) memory of a name with (more distant) memories of hearing about celebrities in the news.

"Once familiarity of an event is achieved, this can relatively easily be converted into a belief that the event did take place," Peters said about his results.  "A next possible step is that individuals interpret their thoughts and fantasies about the fictitious event as real memories."

The implication, of course, is that the "memories" these people have about past lives are very likely to be an amalgam of memories of other things -- stories they've read, documentaries they've watched, perhaps even scenarios they'd created.  Whatever's going on, it's extremely unlikely that the memories these people claim to have come from a prior life.

Of course, there's a ton of anecdotal evidence for reincarnation, which in my mind doesn't carry a great deal of weight.  The whole thing has been the subject of more than one scholarly paper, including one in 2013 by David Cockburn, of St. David's University College (Wales), called "The Evidence for Reincarnation."  In it, he cites claims like the following:

On March 15th, 1910, Alexandrina Samona, five-year-old daughter of Dr. and Mrs. Carmelo Samona, of Palermo, Sicily, died of meningitis to the great grief of her parents.  Within a year Mrs. Samona [gave] birth to twin girls.  One of these proved to bear an extraordinary physical resemblance to the first Alexandrina and was given the same name.  Alexandrina II resembled Alexandrina I not only in appearance but also in disposition and likes and dislikes.  Stevenson then lists a number of close physical similarities and of shared characteristic traits of behaviour.  For example: Both liked to put on adult stockings much too large for them and walk around the room in them.  Both enjoyed playfully altering people's names, such as changing Angelina into Angellanna or Angelona, or Caterina into Caterana.   Most striking of all, however, were the child's memory claims: 'When Alexandrina II was eight, her parents told her they planned to take her to visit Monreale and see the sights there. At this Alexandrina II interjected: "But, Mother, I know Monreale, I have seen it already." Mrs. Samona told the child she had never been to Monreale, but the child replied : "Oh, yes, I went there. Do you not recollect that there was a great church with a very large statue of a man with his arms held open, on the roof? And don't you remember that we went there with a lady who had horns and that we met some little red priests in the town?" At this Mrs. Samona recollected that the last time she went to Monreale she had gone there with Alexandrina I some months before her death.  They had taken with them a lady friend who had come to Palermo for a medical consultation as she suffered from disfiguring excrescences on her forehead.  As they were going into the church, the Samonas' party had met a group of young Greek priests with blue robes decorated with red ornamentation.'

Even though Cockburn is willing to admit reincarnation as a possible explanation of such claims, he sounds a little dubious himself; toward the end of his paper, he writes, "[E]ven if we did think in terms of some underlying common element which explains the similarities between these individuals we would still need to show that the presence of the common element justifies the claim that we are dealing with a single person: to show, that is, what significance is to be attached to the presence of that element."  I would add that we also need to eliminate the possibility of outright lying on the part of the parents -- there has been more than one case where a parent has attempted to hoodwink the public with regards to some purportedly supernatural ability their child allegedly has.

So anyhow.  My sense is that the evidence for reincarnation is pretty slim, and that any claims of past lives are best explained by fallible memory, if not outright lying.  But I'm guessing no one will be surprised that I'm saying that.  In any case, I better wrap this up.  Lots to do today.  Considerably more, I would imagine, than I'd have to do if I was a bug, although that's pure speculation because I don't have much of a basis for comparison.
Posted by Gordon Bonnet at 2:08 AM