The Cabinet from hell

Okay, folks, I'm trying not to panic about a Trump presidency.  I won't say that I have a naturally sunny disposition -- my tendency when confronted by adversity is to shriek "Dear god we're all gonna die!" -- but I try to temper this with a "this too shall pass" attitude.

But my desire to keep my hopes for the future on an even keel were given a severe blow yesterday when I found out that the president-elect has chosen Myron Ebell to head the Environmental Protection Agency, and has his eye on either Forrest Lucas (of Lucas Oil) or Sarah "Drill, Baby, Drill" Palin for Secretary of the Interior.

And this has brought out my inner Chicken Little something fierce.

Ebell is one of the most vocal climate change deniers out there (I will not refer to them as skeptics, because that's not what they are -- skeptics respect evidence).  Ebell considered the U.S.'s participation in the Paris Accords to be "clearly an unconstitutional usurpation of the Senate’s authority."  He went on record in an interview in Vanity Fair in 2007 as saying that "There has been a little bit of warming ... but it’s been very modest and well within the range for natural variability, and whether it’s caused by human beings or not, it’s nothing to worry about."

But do go on, Mr. Ebell, about how the warming is nothing to worry about. 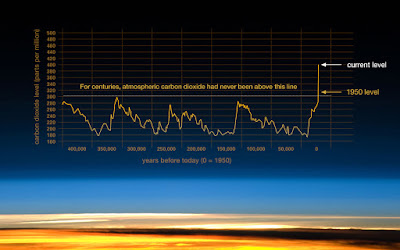 Then for Secretary of the Interior there's Forrest Lucas, CEO and co-founder of the petroleum products company Lucas Oil.  Lucas is not only a virulent climate-change denier, he's battled the federal government over the Endangered Species Act and been an outspoken advocate of opening up federal parklands for oil and gas drilling.  This is the man being considered to run the branch of the federal government in charge of protecting our natural resources?

Of course, he might be okay compared to the other choice, which is Sarah Palin.  I try my best to be charitable, but Palin is not only a nightmare on environmental issues, she might be the most aggressively stupid person ever to hold public office (the only ones giving her a run for her money are Louie Gohmert and Michele Bachmann).  The idea of putting our country's environmental health in the hands of someone who has almost certainly never read anything longer than the back of a cereal box is profoundly frightening.

And the outlandish weather keeps on happening around us, and we keep on sitting on our hands.  The day of the presidential election there was near-record rainfall on the island of Longyearbyen, which only is bizarre once you realize that Longyearbyen is 800 miles from the North Pole and it's the middle of the Arctic winter.

Okay, that's weather, not climate; a one-off, maybe?  Take a look at a study released this week from the University of Florida showing that 80% of the ecosystems studied are already showing effects from climate change.  "Some people didn’t expect this level of change for decades," said co-author James Watson, of the University of Queensland in Australia.  "The impacts of climate change are being felt with no ecosystem on Earth being spared."

The climate change deniers have characterized the scientists as being alarmists, and for the most part the public has bought that perception.  Part of it comes from our unwillingness to admit that there's a problem, because then it becomes incumbent upon us to do something about it.  Part comes from the fact that anything we could do about it would require a serious reworking of our society to lessen its dependence on fossil fuels, and that's pretty uncomfortable to consider.  The reality is, however, that scientists are the most cautious of people; they usually don't go public with information until they're absolutely sure, until their data has been checked and cross-checked and rechecked, because there's a high likelihood that if they jump the gun they'll get caught out and have to publish a retraction.  (Note the difference from politics, where you can pretty much say any fucking thing you want and no one bats an eye.)

So it's a little horrifying when scientists actually do start sound like alarmists, because at that point, we damn sure better sit up and take notice.  Which makes the report that came out just yesterday even more appalling; because it said that we may have already passed the point of no return, that it could be -- their words, mind you, not mine -- "game over for the planet."

Which, given the current slate of picks for filling government offices, is looking increasingly unlikely.
Posted by Gordon Bonnet at 2:14 AM