If, like me,  you find yourself perusing conspiracy websites every so often, you're probably wondering what the conspiracists are gonna do now.

I mean, the whole lot of 'em claimed that Hillary Clinton was in league with the Illuminati at the very least, and at worst was herself the Antichrist.  The election was rigged in her favor, they said, and anyone who got in her way would be steamrolled.  Some claimed that her opponents wouldn't only be shoved out of the way, they'd be assassinated.  She'd win the presidency, then proceed to destroy America.

And then two things happened.  (1) The election was pretty fraud-free, as anyone with any knowledge of the electoral process anticipated.  And (2) Donald Trump won.

Now, if we were talking about normal people here, the expected response would be for them to have a good laugh at themselves, and say, "Wow, I guess we were wrong!  What a bunch of nimrods we are!"  And then vanish into well-deserved obscurity.  Alex Jones, especially, who a few weeks ago was in tears on-air when he spoke of the inevitability of a Clinton presidency, should be clean out of a job.

But these aren't normal people; these are conspiracy theorists.  Which means that the logical thing to do is to assume...

... that Donald Trump himself is part of the conspiracy.

I shit you not.  One week, and they're already turning on him.  Our first contribution from the Loose Grasp On Reality cadre is William Tapley, a right-wing evangelical loony who calls himself the "Third Eagle of the Apocalypse."  (What happened to Eagles #1 and 2, I don't know.)  Tapley says that not only is Trump being controlled by the Illuminati, so is Melania.

The evidence for this?  A mural in the Denver International Airport that has two figures, a man and a woman.  The woman looks vaguely like Melania Trump.  The man, Tapley says, looks as if he is having a lewd act performed upon him by the woman.  For some reason, the only possible conclusion we can draw from all of this is that Trump is a member of the Illuminati.

"Please don’t tell Anderson Cooper what you and I both see," Tapley says, in a video you can watch at either of the links posted above.

If that wasn't enough, we have a second contention, which is that Donald Trump wasn't born in the United States, he was born "Dawood Ibrahim Khan" in the Waziristan region of Pakistan.

While this is funnier than hell from the perspective that Trump was one of the most prominent spokespeople for the whole Obama birtherism thing, I have to admit that as a hypothesis, it doesn't have much to recommend it.  As far as I can see, they just found a photograph of a blond kid in vaguely Middle Eastern garb, and proclaimed that it must be Donald Trump as a child. 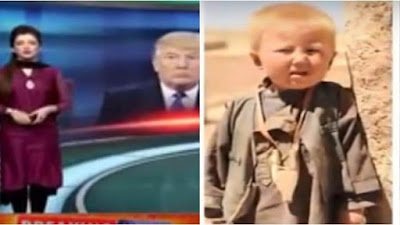 So it was kind of reassuring to find that the other trending story on conspiracy websites these days is that the earthquake that struck near Christchurch, New Zealand a couple of days ago was caused by a "seismic blasting ship" sent for some reason by President Obama.  Wikileaks, which at this point has damn little credibility left even without this story, apparently said so.  "These is science showing disturbances that are linked to the earthquakes," one commenter said (verbatim).  Which is enough proof for me.

Anyhow, I find it fascinating how quickly the conspiracy nutjobs are pivoting on Donald Trump.  I guess if your baseline assumption is that you can't get elected without the blessing of the Illuminati, it stands to reason, if I can use the word "reason" in this context.  But at least it's a mood lightener after the last week, which I sorely needed.  Nice to know there are still people out there who are both crazy and relatively harmless.
Posted by Gordon Bonnet at 2:12 AM