The end of the social experiment

In case I needed another reason to be glad that I'm only a few years from retirement, a few days ago President-elect Trump nominated Betsy DeVos to the post of Secretary of Education. 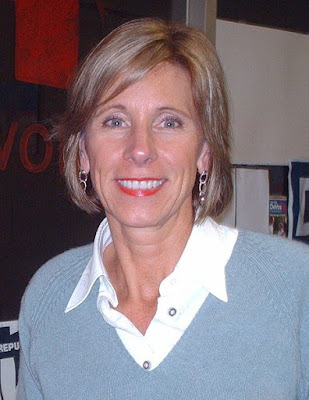 Betsy DeVos [image courtesy of photographer Keith A. Almli and the Wikimedia Commons]

It would be hard to find a less qualified person.  It is debatable whether DeVos has ever set foot in a public school.  She did not attend one as a child, nor did she send her own children there.  She does not have a degree in education, nor has she ever taught, even in a private school.  Her sole connection to schools is her near-rabid support of vouchers, which would funnel money away from public schools and into private (including religious) schools.

It's worse, however, than a simple lack of qualifications.  The Acton Institute, where DeVos is a board member, recently published a piece called "Bring Back Child Labor: Work is a Gift Our Kids Can Handle" which included passages like the following:


Operating out of a justified fear of the harsh excesses of “harder times,” we have allowed our cultural attitudes to swing too far in the opposite direction, distorting work as a “necessary obligation of adulthood,” a gift too dangerous for kids.  Working from these same distorted attitudes, the Washington Post recently published what it described as a “haunting” photo montage of child laborers from America’s rougher past.

The photos surely point to times of extreme lack, of stress and pain.  But as Jeffrey Tucker rightly detects, they also represent the faces of those who are actively building enterprises and cities, using their gifts to serve their communities, and setting the foundation of a flourishing nation, in turn.

The author, Joseph Sunde, was the recipient of a firestorm of criticism over the article, so he changed the title to remove the "Bring Back Child Labor" part, and appended the following disclaimer:


Given the recent attention drawn to this post, permit me to clarify that I do NOT endorse replacing education with paid labor, nor do I support sending our children back into the coal mines or other high-risk jobs, nor do I support getting rid of mandatory education at elementary and middle-school ages.

No?  So what does "Bring Back Child Labor" mean?

What is the most maddening about all of this is that the majority of students I teach do work, and I see the stress that they deal with trying to juggle school, homework, job, extracurricular activities, and family obligations.  The idea that kids today are lazy whiners who need a return to some 1920s-style discipline is a convenient falsehood for those who want to gut the public school system.

DeVos and the Acton Institute are deeply invested in what amounts to defunding public education.  They focused for a time on Michigan, trying to push a "school choice" agenda there (an effort that was ultimately unsuccessful), showering huge amounts of money and gifts on Republican candidates in exchange for their support.  Detroit Free Press writer Stephen Henderson denounced DeVos as engaging in "a spending spree that would swell to $1.45 million in contributions to the party and to individual candidates by the end of July," adding that "in Michigan, children’s education has been squandered in the name of a reform “experiment," driven by ideologies that put faith in markets, alone, as the best arbiters of quality, and so heavily financed by donors like the DeVos clan that nearly no other voices get heard in the educational conversation."

Michigan Board of Education President John Austin, in an apt if somewhat mixed metaphor, said that "It’s like putting the fox in charge of the henhouse, and hand-feeding it schoolchildren...  DeVos’s agenda is to break the public education system, not educate kids, and replace it with a for-profit model."

And if you needed anything else, there's also a good likelihood that she's an Intelligent Design Creationist.  She grew up in the Calvinist Christian Reformed Church; her parents, Edgar and Elsa (Brockhuizen) Prince, are major donors to the Focus on the Family and the Family Research Council;  and her husband, Dick DeVos, came right out with "teach the controversy" bullshit when he was running for Michigan governor in 2006:


I would like to see the ideas of intelligent design — that many scientists are now suggesting is a very viable alternative theory — that that theory and others that would be considered credible would expose our students to more ideas, not less.

By the same argument, I suppose teaching students alchemy in chemistry class and astrology in physics class would "expose them to more ideas, not less."

And funny how whenever one of these clowns tries to ramrod ID or creationism into public school classrooms, they always say that "many scientists" are in favor of it without telling us who these scientists are.  "Cite your sources" apparently doesn't carry any weight in politics, for some reason.

So in the next four years -- assuming DeVos is confirmed, which is likely given the Republican majority in both the Senate and the House -- look for a further siphoning of funds away from public schools, more emphasis on draining resources and talent from poor inner-city schools, and more efforts to hamstring science education.  I've taught for thirty years, and I've weathered some ups and downs in that time, but I can't recall a point at which I felt so genuinely pessimistic about the future of public education.  In a purely selfish sense, I'm glad I'm retiring, probably some time in the next five years, and can get myself right out of this mess.  But it breaks my heart that this great social experiment in educating all children, regardless of socioeconomic status, race, or religion, may be coming to an end.
Posted by Gordon Bonnet at 2:11 AM