The right to fear

I keep telling myself "this will be my last political post," but circumstances keep intervening.

The circumstance this time was one of my Facebook friends who posted an article that said that the people who didn't vote for Donald Trump, and who are now in a serious freak-out about the future of our country, are simply sore losers who can't handle not winning.  We are, the author said, "whiny safe-space liberals" who "were told by mommy and daddy that it's only fair if everyone gets a trophy," and therefore we just need to grow up, suck it up, and deal.

My first thought, after reading this, was that it must be nice to see things that black-and-white.  Makes life easy.  In reality, of course, there were dozens of reasons that people voted the way they did (on both sides).  The pro-life/pro-choice issue, considerations of foreign policy and our relations with China, Russia, and the Middle East, concerns over the rights of LGBT individuals, the size of government, the role of the military...  The reason the election went the way it did is not a matter of a single issue.

Neither, I might add, is the reaction of the people who were on the losing side.  Maybe some of 'em are of the sore-loser variety; they do exist.  Those of you who are regular readers of Skeptophilia know that I've railed as hard as anyone about the tendency of colleges to cave in to students who want nothing more than to be continually validated, who demand that above all, they never have their preconceived notions challenged.  The whole "safe-space" concept completely contradicts the real purpose of education, which is to push the envelope, look at other points of view, expand the mind.  (Note that I am referring to "safe spaces" insofar as the term applies to intellectual pursuits; of course students should be safe with respect to discrimination, bullying, or bodily harm.)

But to characterize the protests now going on over the prospects of a Trump presidency as solely due to Democrats being poor losers is to miss the reality.  Not only does such a stance conveniently forget the ugly, and often racist, rhetoric that flew about from Republicans each time Obama won, it also ignores the fact that many of the people who are protesting are justified in being afraid.  Trump's stump speeches marginalized one group after another -- immigrants (legal and otherwise), Muslims, LGBT, women, atheists... the list goes on and on. 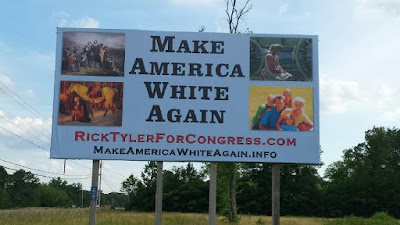 Oh, but that was just chest-thumping, a way to get his base excited, right?  He didn't mean any of that stuff literally, it was just the political version of "locker room talk."  Okay, add to that the appointment of Steve Bannon of Breitbart as Chief Strategist of the incoming administration -- a man who was called "a racist anti-Semite" by John Weaver, adviser to Republican Governor John Kasich of Ohio -- and you might understand why a Jewish friend of mine said, "We always heard, 'Never Again.'  I believed that.  I don't now."

And whatever you might say about Trump's intentions, it appears that some of his followers are in no doubt about taking the whole thing literally.  Hate crimes spiked right after the election -- to the point that even conservative media outlet Forbes commented upon it.  There is a new website called "Why We're Afraid," started with the intention of documenting cases where this ominous rhetoric has crossed the line into actual threats.  Here are just a few of the cases this site records:

I know that like with most ugly acts, these are the actions of a few and don't represent the majority of voters who cast their ballots for Donald Trump.  But for fuck's sake, don't tell the rest of us we have no right to be afraid.  Own up and admit that your candidate did incite such behavior, whether or not he "meant it literally."

And better still, let's hear you repudiate such horrific acts.  You're saying that the folks who don't support Donald Trump are overreacting, that they have no justifiable reason for fear?  Prove it.  Stand up and shout down the people who are, right now, doing these things.  You may have perfectly legitimate reasons for voting for Trump, but it is now incumbent upon you to demonstrate that a Trump presidency isn't going to turn into the horror show that is already, before a week has passed, beginning to unfold. 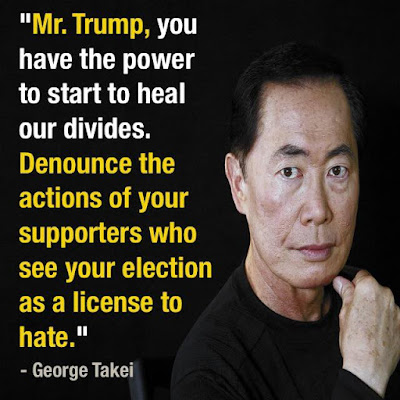 I grew up in rural southern Louisiana.  The lion's share of my family and high school friends are conservative, and the majority of them voted for Donald Trump.  I know them -- I know they would never condone such things.  So I'm asking them, and any other readers who are conservative: show us that you will not tolerate the scapegoating of minorities and other marginalized groups, that you will stand up for the right of all citizens of this country to live, work, and play without fear of being the targets of harassment and violence.

You want us to pipe down, to be good losers, to "suck it up and deal?"  Okay.  But only if you put your money where your mouth is and show us that we on the losing side have no reason to fear.
Posted by Gordon Bonnet at 2:01 AM