In today's contribution from the Unintentional Irony Department, we have: a New Jersey pharmaceuticals company has issued a recall of some homeopathic "remedies" last week because they contain actual active ingredients.

I wish I was kidding about this. "CVS Homeopathic Infants' Teething Tablets", "Kids Relief Homeopathic Ear Relief Oral Liquid" and "CVS Homeopathic Kids' Ear Relief Liquid," all produced by Raritan Pharmaceuticals and marketed nationwide, are being recalled because they contain "varying levels of belladonna," better known as deadly nightshade.

"The recall is a precautionary action," said Sushant Pradhan, a Raritan Pharmaceuticals representative. "The products contain only about a nanogram of belladonna, which is not toxic to anybody."

But wait a minute.  I thought the whole point of homeopathy was that the less of the original ingredients were, the more potent it becomes.  In that case, shouldn't a nanogram be a fatal dose? 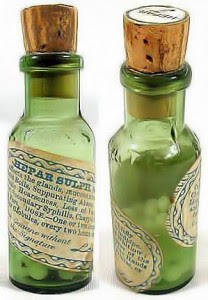 In any case, the company wants everyone to know that there haven't been any reports of adverse effects, that the recall was purely to prevent any problems.  And the most amusing thing about all of this is that it's not the first time it's happened; two years ago, a different company had to recall some homeopathic products that were labeled "Penicillum" because they actually contained Penicillum, the mold that produces penicillin, and there was a chance a person with a penicillin allergy could have a reaction, instead of simply consuming a sugar pill, which was apparently their intent.

What pisses me off about all of this is the kid-gloves approach that CNN used in its report (linked above).  Here's an actual quote:

Pradhan acknowledged that there can be a wide range of belladonna levels across homeopathic treatments outside of the recalled products.  Belladonna is used in several alternative medicines: it can be found in homeopathic eye drops and as a cure for upset stomach, he said.

No, this is "not your typical medicine" because it's not a medicine at all.  It's a completely useless hyper-diluted bottle of water or sugar pills.  So they may be "seeking a healthier, more natural remedy," but what they're getting is completely worthless except insofar as it might trigger the placebo effect.

So this started out being funny, and ended up being not so funny after all.  In any case, if the CNN story doesn't put people on notice that they're been hoodwinked, hopefully What's the Harm? will.  I live in hope that the public will start making decisions based on science, facts, and rationality rather than superstitious hocus-pocus, but it's evident from this that we still have a ways to go.
Posted by Gordon Bonnet at 2:00 AM