There's this thing called the sunk-cost fallacy -- that once a person has put a lot of time, money, effort, or emotional investment into something, they are unlikely admit that it didn't live up to its expectations.

This is the only thing I can come up with to explain why Republican leaders are still sticking with Donald Trump, even after credible allegations that not only did the Russians tamper with the election results, Trump encouraged them to do so.  Giving a foreign power access to our government for malign purposes is, I thought, the definition of treason.  Imagine, for example, if there were evidence that Barack Obama had allowed a foreign government to manipulate election results.  These same people who are giving Trump a pass on this, or ignoring it completely, would be calling for reinstating crucifixion.

To be fair, some Republicans are aghast at this.  Lindsey Graham has been outspoken in his call for an independent investigation of the allegations.  John McCain went even further, saying that if the claims are true, it could "destroy democracy" in the United States.  Even Mitch McConnell, who has been one of Trump's biggest supporters, has joined in the call.  Much as I hate to admit agreeing with Joe Walsh on anything, he hit the nail on the head a few days ago with this tweet: 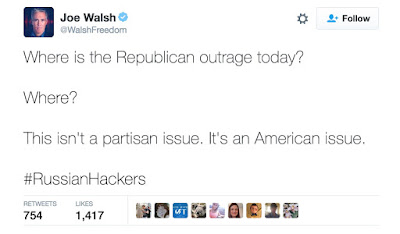 Which is it exactly.  I would think that anyone, regardless of party affiliation, would be appalled at the idea that the Russians may have influenced a national election, and would want it investigated.

But astonishingly, that isn't what's happening.  Other than a few outspoken conservatives who want the issue looked at -- if for no other reason, to clear Trump's name and get rid of any taint of illegitimacy -- most Republicans are shrugging their shoulders and saying, "Meh.  No biggie."

Now wait just a moment.  These were the same people who were chanting "Lock her up!" because of allegations that Hillary Clinton mishandled some emails.  Instead, what has been the overall response?

An increase in the positive ratings of Vladimir Putin.

I'm not making this up.  In a poll conducted by The Economist, favorable ratings for Putin tripled in the past two years, most of the increase being in the last month.  In fact, Representative Dana Rohrabacher of California made the following astonishing statement: "There’s a lot of negative things about [Putin] that are accurate but there are a lot of negative things about him that have been said that are inaccurate.  At least the other other side of the coin is being heard now...  Finally there’s some refutation of some of the inaccurate criticisms finally being heard."

So instead of people being outraged that Putin and his cronies may have interfered in the election, they're saying, "Well, maybe Putin's not so bad after all."

I can't think of anything but sunk cost as an explanation for this.  These people have already overlooked so much in the way of Donald Trump's unethical behavior, evasions, and outright lies, not to mention his blatant lack of qualifications for the job, that to admit that this finally drives them over the edge would require a huge shift of perspective.  I've never seen a candidate that elicits such an enormous emotional response from ordinary citizens; huge investments of time and energy have been put into seeing him in the White House.  For the pro-Trump cadre to say "Okay, we were wrong about him" is apparently a bridge too far.  Easier to say, "Trump's got to be right, so we were wrong about Putin."

Larry Sabato, director of the Center for Politics at the University of Virginia, agrees.  He said, "The Republican base, particularly the Trump part of the Republican base, is going to regard anyone and anything that helped their great leader to win as a positive force, or at least a less negative force."

I hope that wise heads prevail and that the allegations are at least investigated.  And although I don't like Trump, I hope they turn out to be false, because the idea that the Russians (or any other country) are able to manipulate our government so boldly is profoundly terrifying.  But if they are true -- if the evidence supports the Russian hacks -- we have to act.  I'm no constitutional law scholar, but there has to be some provision for invalidating an election's results if the outcome was affected by a foreign power.

Especially if a cold, calculating villain like Vladimir Putin is responsible for it.
Posted by Gordon Bonnet at 2:05 AM