A glitch in the matrix

No matter what your views, on politics or other things, I think there's something we can all agree on:

The last few months have been pretty weird.

First, there was the Brexit vote, followed by the revelation afterwards that over a million people apparently voted to leave the EU because they thought "remain" would win, and after the votes were tallied said that they wished they'd voted the other way.  One person actually said, "I feel genuinely robbed of my vote," as if some supernatural power was controlling his hand when he voted.

Then, we had damn near every political poll predicting a landslide victory for Hillary Clinton, and election night resulted in an unequivocal win in the Electoral College for Donald Trump, something that left people on both sides of the aisle feeling more than a little stunned.

Then we had the Superbowl.  The Patriots were widely favored to win without any difficulty.  Sports writer Paul Kasabian, of Bleacher Report, wrote that the likeliest scenario was that the "Patriots jump out to an early lead and go to running back LeGarrette Blount consistently in the second half of the game to control the time of possession and keep Atlanta's high-powered offense off the field. It's certainly possible that will lead to success, as the Falcons finished 29th this year in run defense DVOA...  The Falcons' defense has improved over the last couple of months, but it's hard to see them slowing down the versatile Pats too much."

And of course, that's not what happened.  The Falcons hit an early and completely unexpected lead, only to have the Patriots stage one of the most stunning comebacks in football history to win 34-28.

Then there was the Oscars, with the bizarre and now-notorious flub wherein Warren Beatty and Faye Dunaway announced La La Land as the winner of Best Film, causing a surge of horrified people onto the stage -- and the producer of La La Land, Jordan Horowitz, was the one to make the correction.

"I'm sorry, there's a mistake," Horowitz said, to gasps from the audience.  "Moonlight, you guys won best picture.  This is not a joke."

And that's not even considering the number of times that I and others have looked at what is happening in the U.S. government -- hell, in the whole world -- and said, "I keep thinking things can't get any weirder, and then it happens."

So apparently all of this loony stuff has left people searching for an explanation.  And they've found one.

There are now people who are using this as evidence that we're living inside a computer simulation gone haywire. 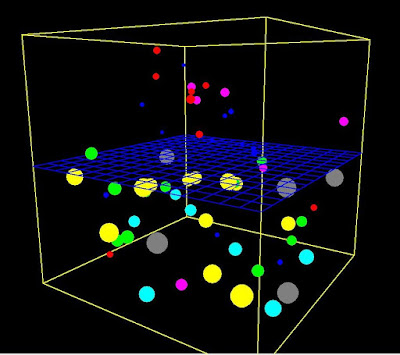 There may be not merely a glitch in the Matrix.  There may be a Loki, a prankster, suddenly running it. After all, the same kind of thing seemed to happen on Election Day: the program was all set, and then some mischievous overlord—whether alien or artificial intelligence doesn’t matter—said, “Well, what if he did win?  How would they react?”  “You can’t do that to them,” the wiser, older Architect said. “Oh, c’mon,” the kid said. “It’ll be funny. Let’s see what they do!”  And then it happened.  We seem to be living within a kind of adolescent rebellion on the part of the controllers of the video game we’re trapped in, who are doing this for their strange idea of fun.

Apparently this isn't just the idle speculation of a handful of woo-woos.  Clara Moskowitz, senior editor of space and physics at Scientific American, wrote about this very idea a year ago.  "A popular argument for the simulation hypothesis came from University of Oxford philosopher Nick Bostrum in 2003, when he suggested that members of an advanced civilization with enormous computing power might decide to run simulations of their ancestors," Moskowitz wrote.  "They would probably have the ability to run many, many such simulations, to the point where the vast majority of minds would actually be artificial ones within such simulations, rather than the original ancestral minds.  So simple statistics suggest it is much more likely that we are among the simulated minds."

But now, Gopnik says, the controllers of the simulation have either lost their grip, or else they're just fucking around with us.  And we shouldn't comfort ourselves with thinking that it's going to be over any time soon:


Until recently, our simulation, the Matrix within which we were unknowingly imprisoned, seemed in reasonably sound hands.  Terrible things did happen as the cold-blooded, unemotional machines that ran it experimented with the effects of traumatic events—wars, plagues, “Gilligan’s Island”—on hyper-emotionalized programs such as us.  And yet the basic logic of the enfolding program seemed sound.  Things pinned down did not suddenly drift toward the ceiling; cats did not go to Westminster; Donald Trump did not get elected President; the movie that won Best Picture was the movie that won Best Picture.  Now everything has gone haywire, and anything can happen.

Whether we are at the mercy of an omniscient adolescent prankster or suddenly the subjects of a more harrowing experiment than any we have been subject to before (is our alien overlords’ funding threatened, thus forcing them to “show results” to the grant-giving institution that doubtless oversees all the simulations?), we can now expect nothing remotely normal to take place for a long time to come.  They’re fiddling with our knobs, and nobody knows the end.

I'm not sure how to think about this.  I've always been a hard-headed materialist; what you see in front of you is real, of course it's real; the Ockham's Razorish least-ad-hoc-assumptions model is that what you're experiencing is, at its essence, the real external universe.  But I've run into people who were idealists -- who believed that what we observe isn't real, that it's a construct of our minds, and that our sensory experience is the only reality.  (I actually knew one guy who was a solipsist -- he believed, apparently seriously, that his perceptions were the only reality, and the rest of us were figments of his imagination who ceased to exist when he wasn't directly observing us.  We used to piss him off by sneaking up behind him and whispering, "We're still heeeere.")

But apparently there are some honest-to-goodness scientific types who are seriously considering the idea that we might be part of a big computer simulation being run by an amazingly advanced race.  And I don't know about you, but this creeps me out.  I had a hard enough time, in the days when I was still attempting to be a practicing Catholic, thinking about a god who was watching me all the time.  Every moment of the day.  While I was showering, while I was taking a piss, and... other times.  You get the picture.  I often wondered how people could possibly find this thought comforting; for me, it was like presupposing that the entire universe was being run by a demented stalker.

So now we're back in the same predicament, but here the Perverted Master Stalker is some superpowerful alien race who not only created me as part of their simulation for some unknown reason, but is watching me to see what I'll do, and probably wondering why their creation picks his nose and plays air guitar when Tommy Shaw's "Girls With Guns" pops up on his iPod.  (Not simultaneously.)

On the other hand, if the being running the simulation really is some kind of Loki-like trickster who is just messing around with us, I suppose it serves him right that some of his creations behave in bizarre ways.

Turnabout's fair play, and all of that sort of stuff.

I guess the upshot is that we should all prepare ourselves for further weirdness.  I'm not sure whether to be apprehensive, or just to leap into the chaos with both feet.  Either way, my reaction probably isn't going to make much difference; however the simulation is being run, I highly doubt that the Alien Master Race is gearing their universe to conform to my desires.  So bring it on.  If the world is going to be crazy, may as well enjoy it.
Posted by Gordon Bonnet at 2:07 AM