All I need is the air that I breathe

The smog in Beijing, China is legendary.  People wear filter masks to go to the grocery store; if you work outside, you have to wear breathing protection on the worst days or you're likely to end up with bronchitis or worse.  The culprit is not only automobile exhaust, but the thousands of unfiltered coal-burning stoves that many use to heat their houses.

All the way back in 1993, studies demonstrated the toll on human health.  Xiping Xu (of the Harvard School of Public Health) et al. published "Air Pollution and Daily Mortality in Residential Areas of Beijing" in The Archives of Environmental Health, and had the following to say:


The relationship between air pollution and daily mortality in 1989 was examined in two residential areas in Beijing, China.  Very high concentrations of sulfur dioxide (SO2) and total suspended particulates (TSPs) were observed in these areas...  A highly significant association was found between ln(SO2) and daily mortality.  The risk of total mortality was estimated to increase by 11% (95% confidence interval [95% CI] = 5%–16%) with each doubling in SO2 concentration...  When mortality was analyzed separately by cause, the association with a doubling in SO2 was significant for chronic obstructive pulmonary disease (29%), pulmonary heart disease (19%), and cardiovascular disease (11%), and marginally significant for the other nonmalignant causes (8%), but not statistically significant for cancer (2%).

In the intervening 24 years, the problem has only gotten worse.  In 2015, Robert A. Rohde and Richard A. Miller of the University of California-Berkeley published a study called "Air Pollution in China: Mapping of Concentration and Sources" showing evidence that the excess mortality in China due to air pollution amounts to 1.6 million deaths a year -- 4,400 a day.

Air pollution, say Rohde and Miller, is a major contributor to 17% of all the deaths in China.

Beijing is hardly the only place this is a problem.  Mexico City's population, topography, and lax pollution standards have given it some of the worst air in the world.  A study by Brent Duke of Stanford University found that a third of the city's population suffers from some kind of respiratory ailment directly attributable to pollution exposure.  On the worst days, simply breathing the air is the health equivalent of smoking forty cigarettes a day.

The reason all of this comes up is that there is a new insane science-denying idea floating around in the Trump administration; that air pollution has no ill effect on health.  And one of the prime movers of this claim is Steve Milloy -- a member of Trump's transition team for the Environmental Protection Agency.

"My particular interest is air pollution," Milloy said.  "[Scientists studying the health effects of air quality] validate and rubber-stamp the EPA’s conclusion that air pollution kills people.  EPA scientists are paying for the science it wants."


In breathing fresh air, the typical adult inhales about 1 microgram of PM2.5 [microscopic particulates] every 6 minutes.

Somehow though, despite the much greater inhalation of the supposedly deadly PM2.5, only 2,000 more smokers die annually from PM2.5-related heart-lung causes that non-smokers — according to air pollution “science” anyway.

Which should win some kind of award for pretzel logic.

Of course, to win that award he'd be competing against himself, because he's also responsible for something he has titled, with no apparent sense of irony, a "Fact Sheet" on air pollution that runs counter to every legitimate study on the topic.  This "Fact Sheet" is so full of straw men, cherry-picked data, and outright lies (such as the statement that no study has ever demonstrated that long-term exposure to fine particulates causes increased risk of mortality) that you'd think that even a quick Google search for peer-reviewed studies on the subject would be sufficient to dismiss it.

But no.  In fact, if you do a Google search for "PM2.5 science" what actually heads the list is Milloy's "Fact Sheet."

So you can't simply dismiss this as the crackpot ideas of a few cranks.  These people have clout, an audience, and (worst of all) the ear of the president.  They are deeply in the pockets of corporate interests, and are one by one assuming leadership positions in the Environmental Protection Agency and the Department of the Interior.

What we are heading toward is the dismantling of all of the hard-won pollution standards that have, in the last few decades, improved the air in places that used to be nearly unlivable -- like Los Angeles and Pittsburgh. 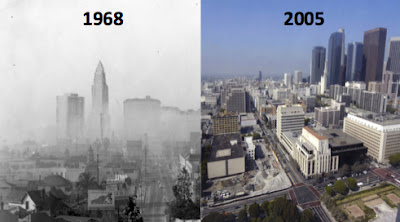 It's not that we've solved the air pollution problem here in the United States.  Los Angeles, Denver, Houston, and Chicago, to name four, still have serious issues with smog, largely due not only to population size but to topography and prevailing weather conditions.  But at least over the past four decades, since the passage of the Clean Air Act, we've been heading in the right direction.

If Milloy and his cronies have their way, we'll be doing a complete about-face.

My own solution to this would be to send Milloy to Beijing during a bad smog event and lock him outdoors for a few days.  Failing that, the only answer is that we need to keep close watch on this administration's likely move toward ripping up the standards for air and water pollution, based on the claim that they're "bad for business."  Call your representatives, and let them know that they can't get away with this.

The air you breathe and the water you drink depends on it.
Posted by Gordon Bonnet at 2:14 AM