Brain waves in the afterlife

It's understandable how much we cling to the hope that there's life after death.  Ceasing to exist is certainly not a comforting prospect.  Heaven knows (pun intended) I'm not looking forward to death myself, although I have to say that I'm more worried about the potential for debility and pain leading up to it than I am to death itself.  Being an atheist, I'm figuring that afterwards, I won't experience much of anything at all, which isn't scary so much as it is inconceivable.

Of course, if the orthodox view of Christianity is correct, I'll have other things to worry about than simple oblivion.

It's this tendency toward wishful thinking that pushes us in the direction of confirmation bias on the subject of survival of the soul.  Take, for example, a paper that came out just this week in PubMed called "Electroencephalographic Recordings During Withdrawal of Life-Sustaining Therapy Until 30 Minutes After Declaration of Death."  The paper was based upon studies of four patients who had died after being removed from life support, in which electroencephalogram (EEG) readings were taken as their life signs faded away.  In one case, a particular type of brain waveform -- delta waves, which are associated with deep sleep -- continued for five minutes after cardiac arrest and drop in arterial blood pressure to zero. 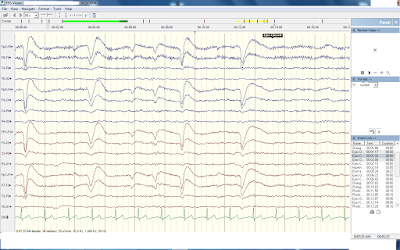 The authors were cautious not to over-conclude; they simply reported their findings without making any kind of inference about what the person was experiencing, much less saying that this had any implications about his/her immortal soul.  In fact, it is significant that only one of the four patients showed any sort of brain wave activity following cardiac arrest; if there really was some sort of spirit-related phenomenon going on here, you'd think all four would have shown it.

That hasn't stopped the life-after-death crowd from jumping on this as if it were unequivocal proof of soul survival.  "One more piece of scientific evidence for an afterlife," one person appended to a link to the article.  "This can't be explained by ordinary brain science," said another.

The whole thing reminds me of the furor that erupted when the paper "Electrocortical Activity Associated With Subjective Communication With the Deceased," by Arnaud Delorme et al., showed up in Frontiers in Psychology four years ago.  The paper had some serious issues -- confirmation bias among the researchers, all of whom were connected in one way or another to groups more or less desperate to prove an afterlife, being only one.  The gist is that the researchers did brain scans of alleged mediums while they were attempting to access information about the dead.

To call the results equivocal is a compliment.  There were brain scans done of six mediums; of them, three scored above what you'd expect by chance.  In other words, half scored above what chance would predict, and half below -- pretty much the spread you'd expect if chance was all that was involved.  The sample size is tiny, and if you look at the questions the mediums were asked about the deceased people, you find that they include questions such as:
Not only are these either/or questions -- meaning that even someone who was guessing would have fifty-fifty odds at getting an answer correct -- they're pretty subjective.  I wonder, for example, whether people would say I was "more rational" or "more emotional."  Being a science teacher and skeptic blogger, people who didn't know me well would probably say "rational;" my closest friends know that I'm a highly emotional, anxious bundle of nerves who is simply adept at covering it up most of the time.

Then there's this sort of thing:

Not to mention:
Which is impossible to verify one way or the other.

Add that to the small sample size, and you have a study that is (to put it mildly) somewhat suspect.  But that didn't stop the wishful thinkers from leaping on this as if it was airtight proof of an afterlife.

Like I said, it's not that I don't understand the desire to establish the survival of the spirit.  No one would be happier than me if it turned out to be true (as long as the aforementioned hellfire and damnation isn't what is awaiting me).  But as far as the 2013 paper that was setting out to demonstrate the existence of an afterlife, and this week's paper that some folks are (unfairly) using for the same purpose -- it's just not doing it for me.

Be that as it may, I still have an open mind about the whole thing.  When there's good hard evidence available -- I'm listening.  Unless it happens after I have personally kicked the bucket, at which point I'll know one way or the other regardless.
Posted by Gordon Bonnet at 2:10 AM