Today's post revolves around an ethical question: is it right for a country to seek extradition of a man for war crimes -- if the alleged criminal is 98 years old and has Alzheimer's?

The question comes up because of the case of Michael Karkoc, whom Polish officials claim was a SS commander during World War II who ordered the massacre of 44 civilians.  Prosecutor Robert Janicki is "100 percent" certain that Karkoc was an officer and founder of the "Ukrainian Self Defense Legion," which in 1943 was responsible for the murder of the villagers of Chlaniow in retribution for the killing of USDL commander Siegfried Assmuss. 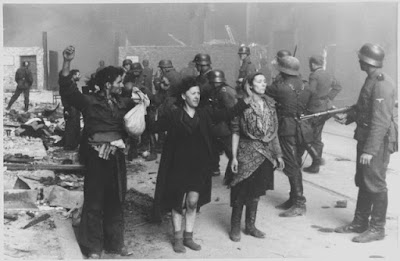 Upon emigrating to the United States, Karkoc never mentioned his membership in the USDL -- he said he'd "worked in a labor camp."  Investigators found no record of his participation in SS-led groups.  He was granted admission, moved to Minnesota, married, fathered four children, and has lived there ever since.

Now, Polish officials want to see him prosecuted and jailed for his crimes.  "This case shows that there is still a possibility, a chance to bring those responsible before a court and I think we should never give up the chance of exercising justice," said Polish prosecutor Andrzej Pozorski.

As far as Karkoc, it's pretty clear he has no memory of what he did, and is confused by what's happening.  An interview with a reporter for the Associated Press resulted in Karkoc's saying merely, "I don't think I can explain."

So my question is: should he be returned to Poland to face justice?

Generally, there are three reasons to support punishing criminals with jail (or worse):

I'm not clear that any of these applies here.  It would be a different thing if the man was capable of understanding what was going on, as in the case of John Demjanjuk, who was elderly but clearly in the possession of his faculties.  Here, we have a person who (if the allegations are correct, which they seem to be) did horrible things 74 years ago.  Had he been apprehended earlier, it would have been entirely just to see him prosecuted.

Now, I'm not sure I see what the point is.

Retribution only makes sense if the person being punished understands why.  It's the reason we have laws preventing the death penalty in cases where the criminal is intellectually disabled.  It's pretty certain that even if he was jailed for the rest of his life, he wouldn't have any real idea why.

The second reason for jailing criminals makes even less sense in this case.  A 98 year old man with dementia isn't a threat to anyone.

The only possible justification comes from the third reason -- to serve as a warning.  To let war criminals know that even if they get away with what they've done for a time, they will not escape forever, and that if apprehended they will face prosecution no matter what.

Which I suppose I can see.  But honestly, even from this argument, it's hard to see what society gains by pursuing this.

I'm finding it hard to come to a clear answer here.  I'm certainly not trying to excuse what he did; the actions of the Nazis are rightly held up as the very worst of what humanity can do.  It's not an argument from humanitarian grounds -- "leave him alone, he's just a little old man" certainly wasn't a standard applied by the concentration camp guards, nor, it must be imagined, by Karkoc himself when he ordered the massacre of the villagers of Chlaniow.

But I'm still having a hard time seeing what the point of prosecution is in this case.

Perhaps one of my readers who is better able to tease apart ethical conundrums will weigh in, here.  Because with the punishment of Michael Karkoc for war crimes, I can't believe that anyone, including society as a whole, really wins.
Posted by Gordon Bonnet at 2:14 AM