If yesterday's post, about enhancing your diet by consuming rotten meat, was not enough, today we have:  buying expensive vitamins to combat a disease that doesn't, technically, exist.

It will probably come as no surprise to those of you who keep abreast of health news to find out that this is the brainchild of that renowned medical researcher, Gwyneth Paltrow.

And this is hardly Paltrow's first bizarre idea.  She was, you may recall, the person who recommended "vaginal steaming" for women to improve the health of their hoo-has.  This time, though, in partnership with one Dr. Alejandro Junger, she's peddling vitamin supplements to combat something she calls "adrenal fatigue:"


When Gwyneth Paltrow started showing signs of adrenal fatigue—feeling completely depleted of energy, with dark under-eye circles and brain fog—she turned to her trusted friend and physician, Alejandro Junger, MD. He knew exactly what her body needed because it was something he had experienced himself years ago.

“Adrenal fatigue is a world epidemic that’s not tested by Western doctors until it’s so extreme that it requires hospitalization—but there’s a whole spectrum of intensity to get there, which is where most people fall,” Dr. Junger says.

Since there was no established protocol for the condition, he developed one himself—and it came in handy years later, when Paltrow came to him for advice. “She tried this formula herself,” Dr. Junger adds.

Well, the reason there's "no established protocol for the condition" is because the condition doesn't exist.  In a paper in the Journal of Endocrine Disorders whose title should win the "World's Bluntest Title for an Academic Paper" award -- "Adrenal Fatigue Does Not Exist: A Systematic Review" -- Flavio Cadegiani and Claudio Kater, of the Universidade Federal de São Paulo Department of Medicine, were pretty unequivocal:


The term “adrenal fatigue” (“AF”) has been used by some doctors, healthcare providers, and the general media to describe an alleged condition caused by chronic exposure to stressful situations.  Despite this, “AF” has not been recognized by any Endocrinology society, who claim there is no hard evidence for the existence.

And after a thorough review of the available evidence, Cadegiani and Kater concluded the following:


To our knowledge, this is the first systematic review made by endocrinologists to examine a possible correlation between the HPA axis and a purported “adrenal fatigue” and other conditions associated with fatigue, exhaustion or burnout.  So far, there is no proof or demonstration of the existence of “AF”...  This systematic review proves that there is no substantiation that “adrenal fatigue” is an actual medical condition.  Therefore, adrenal fatigue is still a myth.

But a little thing like a peer-reviewed paper based on evidence never stops anyone like Paltrow, who is happy to sell you her vitamin supplements to combat your nonexistent adrenal fatigue, for $90 per month. 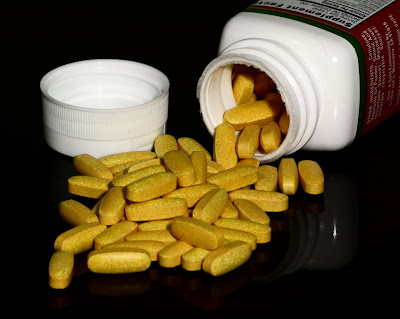 To make up for the fact that she has zero scientific credibility, she's done the next best thing: given her supplements cutesy names.  Thus you can choose from "Why Am I So Effing Tired," "High School Genes," "The Mother Load," and (I kid you not) "Balls in the Air."

To me, that last one sounds like a completely different medical problem, and one that probably is worth a visit to a doctor.  But maybe I'm misinterpreting.

On the other hand, maybe I shouldn't take anything for granted.  Paltrow herself says that "High School Genes" almost got named "FUPA Blaster," where "FUPA" stands for "fat upper pubic area."

The whole thing brings up something that is a never-ending source of puzzlement for me; why we tend to trust celebrities more than trained scientists on topics of health and medicine.  Myself, if I'm going to spend $90 a month on a medical supplement, I want it to be (1) for a legitimate medical condition, and (2) a treatment that will resolve the symptoms of said medical condition.  Here, on the other hand, we have useless vitamin tablets being sold at great cost to treat an imaginary disorder.

Worst of all, the symptoms that Paltrow calls "adrenal fatigue" -- low energy, poor sleep, "brain fog" -- could well be the harbingers of something far more serious.  And if you choose to self-medicate with expensive celebrity vitamins instead, you might well fail to seek out help from a trained medical professional.

And lest you think that people would never do something that stupid, allow me to point out that just last week a woman in California died after being given an intravenous injection of turmeric to combat her eczema.

So caveat emptor, as usual.  Not to mention cavete Paltrowam.
Posted by Gordon Bonnet at 2:08 AM