A couple of days ago, my son and I were chatting, and he asked me if I'd ever heard about the concept of "high meat."

I told him I hadn't.  "High meat," he explained, is when people take the probiotic movement one step further, and eat meat and fish that have deliberately been left out until they are thoroughly spoiled.

It is an occupational hazard of writing here at Skeptophilia that occasionally someone will tell me about some damnfool claim, and it turns out they made it up just to see if I'll believe it.  The problem is, having written for seven years about the depths of nonsense to which the human mind can sink, it's hard for me to dismiss any claim out of hand.

After all, any species that can come up with downloadable medicines and homeopathic water is clearly capable of idiocy far beyond anything I could conceive of.

But I figured I'd hedge my bets, especially since my son has a reputation for being a bit of a wiseass at times.  (Can't imagine where he got that from.)  I said, "This is a joke, right?"

He assured me that it wasn't.  So I did some research.  And sure enough: there are back-to-nature types who are so back to nature that they want to recapture what it was like to be a hyena eating carrion in the hot sun of the African savanna.

Don't believe me?  Take a look at this article from the New Yorker by Burkhard Bilger, wherein he visits people who have various takes on the probiotic idea, finally ending up in the home of Steve Torma of Asheville, North Carolina, who has pushed the whole thing to the ultimate.  Torma makes his own "high meat" by letting raw meat or fish decompose in jars.  Then he eats it.  Bilger writes:


Torma ducked into the back of the house and returned with a swing-top jar in his hands. Inside lay a piece of organic beef, badly spoiled.  It was afloat in an ochre-colored puddle of its own decay, the muscle and slime indistinguishable, like a slug.

Even Torma seemed to recognize that it wasn't a very appealing diet.  "The first couple of bites," Torma said, "can be rough going."

There are a variety of other sites where I found out way more about this practice than I ever wanted to know.  The site Local Harvest has directions for preparing "high meat," attributing any resistance we might have to eating said decomposed glop to "prior conditioning."  The Raw Paleo Diet Forum goes into considerable detail about consuming "high meat," and says that if you end up with explosive diarrhea after eating it, not to worry because it's just your body "purging itself of toxins."

Cooking, and food preservation strategies in general, caught on primarily because the people who used them were less likely to die of food poisoning.  There are a lot of bacteria out there that would be very happy to make you violently ill -- E. coli, Listeria, Cryptosporidium, and Salmonella come to mind -- and since decomposition happens because of the digestion of organic matter by bacteria, if you eat decomposed food, you are approximately 1,582,614 times more likely to get bacterial food poisoning than the rest of us.

And the symptoms you get are not from the body "purging itself of toxins."  What it is doing is attempting to purge itself of the pathogenic bacteria you were stupid enough to consume.

Consider, too, that we are evolved (not "conditioned") to avoid rotten stuff.  Decomposing meat contains two chemicals -- tetramethylenediamine and pentamethylenediamine -- that are so foul-smelling that their more common names are "putrescine" and "cadaverine," respectively.  Our noses are early-warning systems, giving us valuable information that is essential to our survival.

Including, for example, "Don't eat something that smells like a putrescent cadaver, you fucking moron." 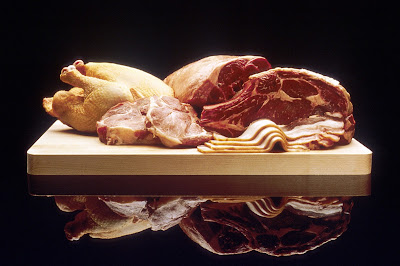 It's not that the whole probiotic thing is a bad idea.  Some fermented food -- pickles, sauerkraut, and kimchi, for example -- are fermented with specific strains of bacteria to produce particular flavors and odors.  These bacteria are also chosen on the basis of (1) tasting reasonably good, and (2) not killing you.  (Many of these bacteria are part of a healthy intestinal flora, which has been shown to protect you from diseases like ulcerative colitis and irritable bowel syndrome.)

Eating things that have rotted with your ordinary, garden-variety bacteria, however, is a good way to spend the next few days on a first-name basis with your toilet.  There's a reason we have strict sterilization protocols for food, such as cooking, canning of vegetables, and pasteurization of milk.  It reduces the likelihood of the Bad Guys getting into your digestive tract.  Consider the FDA's stance on pasteurization: "Raw milk is inherently dangerous," their guidelines on dairy safety state.  "It should not be consumed by anyone at any time for any purpose."

But if you want to try out life as a vulture, have at it.  Me, I'm gonna stick with "low meat," medium-rare, with a large glass of red wine, which not only tastes great but is much less likely to give me horrible bacterial infections.  Call me particular, but I'm just kind of finicky that way.
Posted by Gordon Bonnet at 2:07 AM