The end of the experiment

Have you heard about House Bill 610?

Introduced by Representative Steve King (R-IA), H.R. 610 is called the "Choices in Education Act of 2017."  Here's the short description:


The bill establishes an education voucher program, through which each state shall distribute block grant funds among local educational agencies (LEAs) based on the number of eligible children within each LEA's geographical area. From these amounts, each LEA shall: (1) distribute a portion of funds to parents who elect to enroll their child in a private school or to home-school their child, and (2) do so in a manner that ensures that such payments will be used for appropriate educational expenses.

To be eligible to receive a block grant, a state must: (1) comply with education voucher program requirements, and (2) make it lawful for parents of an eligible child to elect to enroll their child in any public or private elementary or secondary school in the state or to home-school their child.

Already there should be some alarm bells ringing, and I haven't gotten to the really bad part yet.  This voucher system allows tax money to be funneled to private institutions (including religious schools), and yet establishes no standards that those institutions need to meet in order to receive these "block grants."  So that's right: your tax dollars might go to support a school where children are taught in science class that the Earth is 6,000 years old and dinosaurs went for a ride on Noah's Ark.  In North Carolina, a voucher program even funds schools that have explicit conditions for religious adherence for a student to be considered for admission.

Further, the bill sets no guidelines for money being provided for homeschooling.  Note that I am not against homeschooling per se: I know several homeschooling families who have made that choice for excellent reasons, and whose children turned out well educated (better educated, in fact, than the average public school student).  However, I've also known families in which kids were kept home out of suspicion or paranoia, and in one case resulted in an eleventh grader finally re-entering public school -- with a fourth-grade reading level.  So simply giving money to homeschoolers for "appropriate educational expenses" without specifying what is meant by "appropriate" is seriously thin ice. 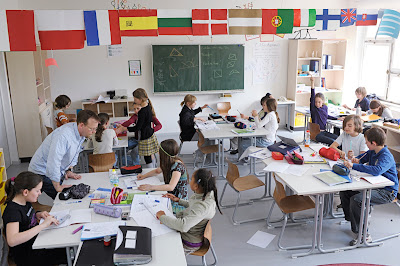 Not only that, the idea of replacing current public school programs with a voucher system has a proven track record of abject failure.  A study in 2016 of voucher-funded private schools in the Milwaukee area found that 41% of those schools failed.  "I do not mean failed as in they did not deliver academically, I mean failed as in they no longer exist," said Michael Ford of the University of Wisconsin-Oshkosh, who was lead author of the study. "These 102 schools either closed after having their voucher revenue cut off by the Department of Public Instruction, or simply shut their doors.  The failure rate for entrepreneurial start-up schools is even worse: 67.8 percent."

These results are mirrored in other states -- Louisiana, Mississippi, North Carolina, and Pennsylvania have all seen significant problems with voucher programs, including loss of funding to public schools and dubious results in terms of student success, retention, and college acceptance after graduation.

Let's start with the first one.  The ESEA is a wide-reaching piece of legislation that focuses on equal access to education regardless of disability or socioeconomic status, and mandates school accountability, professional development, and support of educational programs.  Provisions include providing financial support to schools serving students from low-income families, assisting schools with the purchase of textbooks and library materials, funding bilingual education and English as a Second Language curricula, and creating or maintaining enrichment programs such as classes for gifted and talented students, Advanced Placement programs, and education in the arts and music.

The No Hungry Kids Act should be self-explanatory, but let me use the description from the bill designed to repeal it:  The NHKA establishes "certain nutrition standards for the national school lunch and breakfast programs. (In general, the rule requires schools to increase the availability of fruits, vegetables, whole grains, and low-fat or fat free milk in school meals; reduce the levels of sodium, saturated fat, and trans fat in school meals; and meet children's nutritional needs within their caloric requirements.)"

Yes, you understand all this correctly: the Choices in Education Act of 2017, if passed (and it seems to have widespread support), will trash both of these laws entirely.

One of my education professors in my long-ago teacher training program at the University of Washington called the last 120 years of American public schools "an experiment to test the radical hypothesis that all children can, and deserve to, be given equal access to education."  Through much of our history, this hasn't been the case.  If you were wealthy, your kids got to go to school; if you were not, they didn't.  The result was that poverty was effectively hereditary, and so was all that goes with it; poor access to health care, shortened life span, exploitation in the form of child labor, low-paying jobs with awful working conditions waiting for kids when they become adults because they've been trained for no better.  This bill, should it become law, will tear down an edifice that (while certainly far from ideal) has come closer than humanity ever has to giving all children, regardless of gender, origin, race, religion, or socioeconomic status, a chance to break the fetters of institutionalized class stratification.

This bill is still in the early stages, and it's not too late to fight it.  Call your representatives.  Let them know that should the Choices in Education Act of 2017 become law, it will result in irrevocable damage to our education system.  Tell them that the proposed changes aren't supported by the empirical data, and will accomplish little but program cuts in already-cash-strapped public schools, and further weakening of the wall between church and state through diverting public tax money to religious institutions.

Let them know that the public school system could use reform, but destroying it entirely will have repercussions that will take generations to undo.  Our educational system isn't perfect, but it's an experiment in social equity that can't be allowed to fail.
Posted by Gordon Bonnet at 2:02 AM