The silencing of dissent

The word education comes from the Latin verb educare, meaning "to draw out of."

Too many people involved in the educational process forget this.  Education is not trying to see how many facts we can stuff into students' brains; it's seeing how we can foster their growth, challenge their preconceived notions, help them to see the universe in a new way.

Which is why what happened at Wellesley College this week is so completely antithetical to the spirit of education.

On Monday, a committee of Wellesley professors presented a letter to the community of the college.  I quote  part of the letter below, but the entire text is available at the link provided if you'd like to read it:


Over the past few years, several guest speakers with controversial and objectionable beliefs have presented their ideas at Wellesley...  There is no doubt that the speakers in question impose on the liberty of students, staff, and faculty at Wellesley.  We are especially concerned with the impact of speakers' presentations on Wellesley students, who often feel the injury most acutely and invest time and energy in rebutting the speakers' arguments.  Students object in order to affirm their humanity.  This work is not optional, students feel they would be unable to carry out their responsibilities as students without standing up for themselves.  Furthermore, we object to the notion that onlookers who are part of the faculty or administration are qualified to adjudicate the harm described by students, especially when so many students come forward.  When dozens of students tell us they are in distress as a result of a speaker's words, we must take those complaints at face value.

What is especially disturbing about this pattern of harm is that in many cases, the damage could have been avoided.  The speakers who appeared on campus presented ideas that they had published, and those who hosted the speakers could certainly anticipate that these ideas would be painful to significant portions of the Wellesley community.

The letter was spurred by the appearance on campus of Laura Kipnis, writer and self-described feminist who has criticized Title IX implementation, and who has decried a "culture of sexual paranoia" on American college campuses.  Kipnis, for her part, was shocked by the faculty committee's response.  She wrote:


I find it absurd that six faculty members at Wellesley can call themselves defenders of free speech and also conflate my recent talk with bullying the disempowered.  What actually happened was that there was a lively back and forth after I spoke.  The students were smart and articulate, including those who disagreed with me.

I’m going to go further and say — as someone who’s been teaching for a long time, and wants to see my students able to function in the world post-graduation — that protecting students from the ‘distress’ of someone’s ideas isn’t education, it’s a $67,000 babysitting bill.

Which is it exactly.  The goal of college -- hell, the goal of education in toto -- is not to insulate you from the trauma of ever hearing ideas you disagree with, it's to open your mind to consideration of other answers and other ways of thinking.  It's not supposed to be comfortable.  In fact, if you come out of college with your views completely unchanged from what they were on your first day as a freshman, the college has failed. 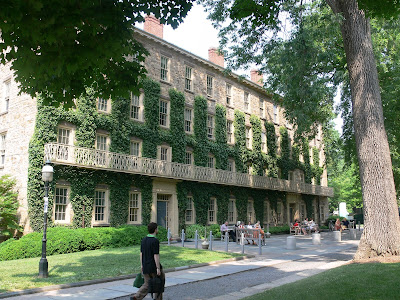 Note that I'm neither defending nor opposing Kipnis's views.  In fact, my opinion on Kipnis's views is entirely irrelevant.  But the idea that a college would block a speaker simply because his or her ideology runs counter to that of "dozens of students," and thus cause them to be "in distress," is ridiculous.

The bottom line: the only speakers who should be prevented from speaking on college campuses by decree are those who recommend criminal activity or violence.  Other than that, if you disagree with the views of a speaker, you have three options: (1) don't attend; (2) stage a non-violent protest; or [best of all] (3) show up and ask questions that push the speaker toward addressing whatever it is you disagree with.

Which is also why what happened at Middlebury College (Vermont) last week is so appalling.  Professor Allison Stanger, of the Department of International Politics and Economics, had invited Dr. Charles Murray of the American Enterprise Institute to give a talk.

The AEI is a pro-capitalism conservative think tank.  Murray rose to some notoriety with his 1994 book The Bell Curve, which proposed that intelligence was largely inherited, and was a better predictor of job success, likelihood of committing a crime, and financial status than is the socioeconomic status of the parents.  Murray was roundly condemned as a racist for writing about intellectual differences between different ethnic groups, and his book is still a subject of controversy today.

Murray never got to speak.  His appearance at the lectern was greeted by shouts of derision.  After it became clear that he was not going to have an opportunity to say anything, he and Dr. Stanger left -- but a screaming mob followed them, attacked Dr. Stanger's car, and resulted in her receiving a serious concussion and whiplash.

Stanger herself was astonishingly philosophical about the whole thing.  She writes:


It is obvious that some protesters made dangerous choices.  But with time to reflect, I have to say that I hear and understand the righteous anger of many of those who shouted us down.  I know that many students felt they were standing up to protect marginalized people who have been demeaned or even threatened under the guise of free speech.

But for us to engage with one another as human beings -- even on issues where we passionately disagree -- we need reason, not just emotions.  Middlebury students could have learned from identifying flawed assumptions or logical shortcomings in Dr. Murray's arguments.  They could have challenged him in the Q. and A.  If the ways in which his misinterpreted ideas have been weaponized precluded hearing him out, students also had the options of protesting outside, walking out of the talk, or simply refusing to attend...

More broadly, our constitutional democracy will depend on whether Americans can relearn how to engage civilly with one another, something that is admittedly hard to do with a bullying president as a role model.  But any other way forward would be antithetical to the very ideals of the university and of liberal democracy.

So the professors at Wellesley, and the students who rioted at Middlebury, are examples of exactly the opposite of what colleges should be about.  Once again, as long as you are not promoting violence or criminal activity, you should have the right to express your views.  Students learn more by being exposed to unpopular opinions, and learning to frame their arguments rationally and logically, than they will by belonging to an institution where unpopular opinions are suppressed.

And the professors and administrators should be unequivocal in their support of this.

The price of being cowed by the letter from the professors at Wellesley and the violence at Middlebury is the conversion of colleges into comfortable little bubbles of confirmation bias, where only the majority opinion is ever heard, understood, or argued with.  And if you need an example of where that can lead, you have to look no further than the echo chamber of our current administration, where yes men and women have insulated the president from the consequences of his own lies, and any dissent is labeled as fake news at best, and treason at worst.

Intellectual discomfort is not bad for you; in fact, you should seek out opposing opinions.  It keeps you honest about the soundness of your own views, and helps you to craft arguments against positions you disagree with based on the facts of what your opponents believe.  It hones your mind, improves your grasp of the real situation, and fosters dialogue and open communication.

Which should be the outcome of education in any case.
Posted by Gordon Bonnet at 2:16 AM