The witches vs. Donald Trump

As an example of the general principle that there is nothing that is so weird that someone can't respond to it in such a way as to make it far weirder, we have: witches attempting to cast a spell on Donald Trump.

Many of us are looking for ways to resist President Trump's rather pernicious agenda, so I suppose it's not to be wondered at that the Wiccans want to give it a try, too.  They did so five days ago with hexes designed to "bind Donald J Trump, so that his malignant works may fail utterly" so that he "shall not break our polity, usurp our liberty, or fill our minds with hate, confusion, fear, or despair."  They used various props such as orange candles, magic wands, and Tarot cards to support the cosmic vibrations they were attempting to harness, and instead of ending with the traditional closing words of Wiccan spells -- "So mote it be" -- they ended with "You're fired!"

For the good of the order, I'm not making this up.

Michael Hughes, one of the witches involved, explained that they weren't trying to harm President Trump.  "This is not the equivalent of magically punching a Nazi," Hughes said.  "Rather, it is ripping the bullhorn from his hands, smashing his phone so he can't tweet, tying him up, and throwing him in a dark basement where he can't hurt anyone."

Which, honestly, doesn't seem to be any less violent than magically punching a Nazi.

Be that as it may, the whole thing turned out to be pretty popular, given that a Facebook page devoted to the ritual garnered 10,500 likes, and for a while the hashtag #magicresistance was trending on Twitter.

As far as results, though, not so much.  After the Cosmic Convergence of Anti-Trump Spells, there has been no discernible decrease in the president's tweets, lying, or divisive bullshit.  So you'd think that'd make the Wiccans go, "Huh.  I guess it doesn't work, then.  What a bunch of goobers we are."  And that'd be that.

But as I said, there's no bizarre claim that can't be countered so as to make it even more bizarre.  Despite the utter lack of effectiveness of the curses, the whole episode had the pro-Trump cadre completely up in arms.  For example, Alex Jones, who really needs to stop doing sit-ups under parked cars, claimed that the witches were attacking Trump "because he's good."  "Every evil force out there hates Trump," Jones said.  "He has mega-level charisma."

But there's no one who can contribute to a surreal situation quite like Pat Robertson.  He was outraged when he heard about what the witches were doing, and said that concerned folks need to "send those curses back where they came from."

"I read that a bunch of witches have gotten together to put a curse on Trump," Robertson told his audience on The 700 Club a couple of days ago, "and I think the Christians need to be praying for him to defend him...  all you have to say is the five words, 'I bind you, Satan, and the forces of evil, in Jesus's name.'"

Which is way more than five words.  But given the grade-A-lunacy of the rest of the claim, I'm not going to quibble over simple arithmetic.

His co-host, Wendy Griffith, agreed.  "That thing with the witches was supposed to happen Friday night at midnight, and I know all the believers were there on Facebook, you know, cancelling out those curses by the witches, and pleading with the blood of Jesus.  You know, there were probably millions of Christians praying for him."

"Yes," Robertson said.  "Send it back where it came from.  Send the curse back."

So let's see, here.  We have some witches sending useless magic spells out against Trump, because he's so good and charming and charismatic, and Pat Robertson is mobilizing Christians on Facebook to utter their own magic spells (prayers, to be accurate, although in this particular case I'm not seeing much of a difference) to make the witches' spells bounce back, presumably resulting in their being "thrown in a dark basement where they can't hurt anyone."

It's enough to make me want to take Ockham's Razor and slit my wrists with it. 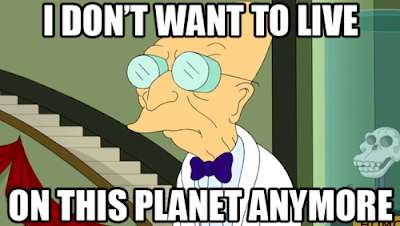 Look, I know that magical thinking is hard to eradicate, but is it too much to ask people to apply a little bit of rationality to these situations?  Okay, yeah, it probably is beyond Alex Jones and Pat Robertson, but fer cryin' in the sink, why don't their listeners stop and say, "All right, that was ridiculous"?

Or better yet, stop listening?

Anyhow, that's today's news from the Forlorn Hope Department.  Me, I'm not expecting this to be over any time soon.  I'm sure the witches have some more potent spells in their arsenal, and once they realize that (1) the first salvo accomplished fuck-all, and (2) the ultra-religious are mobilizing their forces to work up some kick-ass counter-spells, they'll really want to step up the campaign.  Maybe they'll even move from orange candles to black ones.

That's when shit's gonna get real.  Or surreal.  Whatever.
Posted by Gordon Bonnet at 2:02 AM