There goes the sun

New from the "Oh, No, Here We Go Again" department, today we have: people flipping out over the fact that we're going to have a total eclipse this summer.

To be sure, it's a pretty cool event.  The path of totality will go from Oregon to the Carolinas, and at its widest will be 60 miles in width.  The last time a total eclipse of this magnitude happened in the United States was 99 years ago, so I suppose it's understandable that people are taking notice.  (In fact, I know more than one person who is making plans to visit the path of totality -- but if you're planning on joining them, you might well be too late.  Apparently hotels in cities in the eclipse's path started filling up a couple of years ago.)

But of course, there's nothing like a weird astronomical event to get woo-woos of all stripes all fired up. 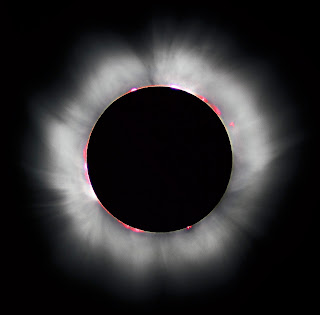 Take, for example, the End Times cadre, who think that a completely explainable and predictable feature of the Earth's position in space -- no weirder, really, than standing in someone's shadow -- is a sign that the Rapture is upon us.  Never mind that the other 1,583,294 times these people have been absolutely certain that the Rapture was imminent, cross our hearts and hope to die, what actually happened was: nothing.

They're not going to let a little thing like a zero batting average discourage them.

"The Bible says a number of times that there’s going to be signs in the heavens before Jesus Christ returns to Earth," said Gary Ray, writer for the Christian publication Unsealed.  "We see this as possibly one of those...  We think it’s God signaling to us that he’s about to make his next move."

Ray, however, is ignoring the fact that even if you buy into his worldview, there's the inconvenient little scripture verse about how "Assuredly, I say to you, this generation will by no means pass away till all these things take place.  Heaven and earth will pass away, but My words will by no means pass away.  But of that day and hour no one knows, not even the angels of heaven, but My Father only," from Matthew 24, which is inconvenient because not only does it imply that people like Gary Ray are talking out of their asses, it also states outright that Jesus said he was going to return and the world would be destroyed (along with other special offers like the sun being darkened and the stars falling from heaven) before the people listening to him were dead, and that kind of didn't happen.

Ray, though, does not seem unduly bothered by this, and in fact says that the eclipse will be super-significant because the full moon will be near the constellation of Virgo the Virgin, which of course will make everyone think of the passage in Revelation 12, "A great sign appeared in heaven: a woman clothed with the sun, with the moon under her feet and a crown of twelve stars on her head.  She was pregnant and cried out in pain as she was about to give birth.  Then another sign appeared in heaven: an enormous red dragon with seven heads and ten horns and seven crowns on its heads," despite the fact that being a virgin and being pregnant are mutually exclusive conditions.

Unless you count the alleged Immaculate Conception, which frankly, still sounds a little sketchy to me.

Then, there's the fact that we won't have to wait another 99 years to see a total eclipse in the United States; there's going to be another one on April 8, 2024, which fortunately for me looks like it'll pass right over my house.  Ray, though, is excited not because of a second shot at seeing a stunningly beautiful astronomical event; he thinks it's significant because where the paths of the two eclipses cross, it makes a letter X.

So he's interpreting this to mean that god is warning us that he's going to X out the United States for our wickedness or something.

It also brings up the question of what shape Ray thinks two intersecting lines would create if this weren't an omen.

So what we have here is a deity who is warning us about the End Times using an event that astronomers predicted decades ago, despite the fact that previous astronomical events like lunar eclipses resulted in nothing special happening.  My advice: see if you can find a spot to view the solar eclipse on August 21, because it promises to be pretty cool.  And don't cancel any plans you might have for August 22.

Chances are, we'll all be here, un-Raptured, for some time to come.
Posted by Gordon Bonnet at 2:14 AM