A call to violence

I suppose it's more or less inevitable that the vast majority of religious people pick and choose which standards and precepts they want to adhere to.  Even the most literal of biblical literalists, for example, usually don't keep the dietary and dress laws laid out in Leviticus.  I'm far from knowledgeable about Islam, but I expect the same is true there; even the ones who claim to live down to the letter of their Holy Book still ignore the passages they find inconvenient.

In part, of course, that's because all of those Holy Books are rife with internal contradictions.  On its simplest level, there are mutually contradictory factual passages that obviously can't be true at the same time, such as the following bits from 2 Kings and 2 Chronicles:


Jehoiachin was eighteen years old when he began to reign, and he reigned in Jerusalem three months. —2 Kings 24:8

Jehoiachin was eight years old when he began to reign, and he reigned three months and ten days in Jerusalem… —2 Chronicles 36:9

That stuff is kind of trivial, honestly, and only a problem if you believe that every last word in the bible is divinely inspired and infallible.  A little more troubling are the ones that address deep philosophical questions, and give you different answers depending on where you look, such as this quintet of passages:

Behold, the days are coming, declares the Lord, when I will make a new covenant with the house of Israel and the house of Judah, 32 not like the covenant that I made with their fathers on the day when I took them by the hand to bring them out of the land of Egypt... —Jeremiah 31:31

For if that first covenant had been faultless, there would have been no occasion to look for a second. —Hebrews 8:7

For truly I tell you, until heaven and earth disappear, not the smallest letter, not the least stroke of a pen, will by any means disappear from the Law until everything is accomplished. —Matthew 5:18

For this reason Christ is the mediator of a new covenant, that those who are called may receive the promised eternal inheritance -- now that he has died as a ransom to set them free from the sins committed under the first covenant. —Hebrews 9:15

So the old laws are everlasting... but wait, they're not... oh, yes, they are, nothing will disappear from the law until Jesus returns... oh, wait, no, there's a new set of laws...

I'm sure that biblical scholars of a literalist bent have a way of arguing around all that, but that sort of apologetics has always struck me as little more than sophistry.  And, of course, the fact that no matter what you believe, you can find support for it somewhere in the bible, means that even people who espouse crazy and/or dangerous beliefs can claim that they're biblically inspired.

Which brings us to Dave Daubenmire.

Dave "Coach" Daubenmire has been for years a spokesperson on the more fringe-y edges of the Religious Right.  His weekly webcast, Pass the Salt Live, does all of the usual stuff -- slamming LGBT people, demanding religion (specifically Christianity) be mandatory in public schools, firing away at the "secular left."  But now Daubenmire has gone one step further.

He's saying that Christianity needs to be more violent.

In last week's installment of Pass the Salt Live, Daubenmire crowed about Donald Trump's cringe-worthy shove of the Prime Minister of Montenegro during a photo op, and Representative Greg Gianforte's body-slamming a reporter who asked him a question he didn't want to answer.  Daubenmire said:


The only thing that is going to save Western civilization is a more aggressive, a more violent Christianity.  Look at [Trump].  They’re all little puppies, ain’t nobody barking at him … He’s walking in authority.  He walked to the front and center and they all know it, too, man.  He just spanked them all...

The Lord is showing us a picture of the authority we should be walking in.  People are sick and tired of it.  They’re saying, ‘Yes, a fighter! Go, dude, go!’ … Who won?  The dude that took the other dude to the ground [Gianforte].  That should be the heart cry of Christian men.  From the days of John the Baptist until now, the kingdom of God has suffered violence and violent men take it back by force.

But just wait a second, now.  Isn't that exactly what people of Daubenmire's stripe hate about Islam -- that acting under the perceived precepts of their religion, they're committing violent acts?  Of course, he sees Islam as an evil false religion, so I suppose it's no wonder he doesn't get the parallels.


Still, you'd think he'd at least be aware of what happens when you have angry, fearful Christians in charge, imposing their views by violence -- horror shows like the Inquisition, the witch trials, the Crusades.

Although I'm guessing that Daubenmire wouldn't find any problem with those, either. 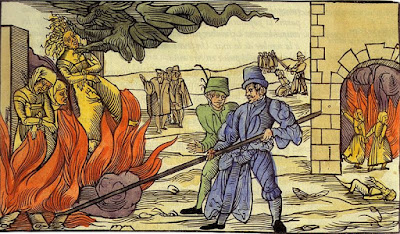 And what happened to the passage from Matthew 5, "If anyone slaps you on the right cheek, turn to them the other cheek as well?"  But as I've said, people of this type are awfully good at ignoring the passages they'd rather not live by.

Me, I see Daubenmire as more dangerous than the societal ills he rails about on a weekly basis.  It's his kind of rhetoric that leads to people doing seriously batshit stuff, such as the white supremacist in Portland who killed two people in a train station who were defending some passengers from his ethnic slurs.  Once you've decided that your views -- white supremacy, jihad, or "taking the kingdom of God back by force" -- are justification for committing violence against your fellow human beings, you've taken the brakes off of morality.  After that, the only difference between you and the Inquisition is scale.

And you've also put yourself outside of the bounds of reasonable discussion.  There's no appealing to logic with someone who has abandoned rationality.  The best one can hope for is that that most of the people who listen to Daubenmire and others of his ilk are themselves not going to take him literally.

But as we've seen in the past, and as the people of Portland saw first hand last week, all it takes is one violent, self-righteous extremist to put innocent lives at risk.  And they nearly always claim that their own reasons for committing such acts are virtuous -- same as Dave Daubenmire wishing more Christians were like Donald Trump and Greg Gianforte.
Posted by Gordon Bonnet at 2:19 AM