An anodyne against despair

Yesterday, I was discussing with one of my colleagues how important it is to find things that lift your spirit.  The world has been replete with dismal news lately, and it's all too easy to decide that everything's hopeless -- to become either cynical or despondent.  I know I have to fight that tendency myself, especially considering the topics I frequently address here at Skeptophilia.

It's essential to take a moment, every so often, to step back and recognize that however terrible current events have been, there is still great love, compassion, and wonder in the world.  So I thought I'd take a day off from the continual stream of WTF that the news has become, and consider a few examples of what beauty we humans are capable of.  Think of it as an anodyne against despair, a way to inoculate yourself against losing hope. 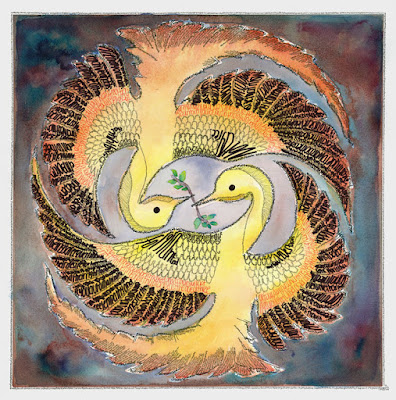 First, take a look at this video by the Dutch artist Thijme Termaat.  He spent two and a half years creating a progressive set of paintings, condensed it into a three-minute video, set it to a piece from Vivaldi's The Four Seasons, and named it Timelapse.  Take three minutes and be amazed.


When I was in Boston a while back, I went to the Boston Institute of Contemporary Art, and I lucked out and saw some work by the incredibly creative Rachel Perry Welty.  The piece that absolutely captivated me was a twelve-minute video called Karaoke Wrong Number, wherein she took four years' worth of voicemail messages she'd received by accident (i.e., the person had called her number but thought they were leaving a message to someone else entirely), and lip synced to them.  I stood there and watched the entire piece three times in a row -- it's mesmerizing.  The incredible thing about it is that she's able to shift her facial expression and body language to match the voice and message of the person -- it's funny, wry, and at times absolutely uncanny, and illustrates Welty's sheer creative genius.  (You can watch a five-minute clip from it at the link above.)

If you don't mind crying, take a look at Kseniya Simonova's stupendous feat of drawing in sand on a light box that brought the whole audience to tears in Ukraine's Got Talent.  It shows the effect of the German invasion on the people of Ukraine during World War II, and packs an emotional punch like nothing I've ever seen before.

If after that, you want to see something that is pure whimsy to cheer you up, you need to watch the amazing musical marble machine created by Martin Molin of the Swedish band Wintergatan.  Molin created a wild Rube Goldberg machine, powered by a hand crank and 2,000 marbles, that plays a tune he wrote.  It's one of those things that you watch, and you just can't quite believe it's real.


If you want to blow your mind further, have a look at this short little video showing one of the crazy three-dimensional sculptures of Japanese mathematician and artist Kokichi Sugihara.  Sugihara specializes in creating optical illusions out of paper -- in this case, a structure that seems to induce marbles to roll uphill.  The weird thing to me is that even when he shows you how it's done -- which he does, about halfway through -- I still can't see it any other way.  It's so cleverly done that my brain simply can't handle it.


Last, for sheer exuberance -- if you're like me, it'll make you laugh and cry at the same time -- check out the short film "Where in the Hell Is Matt?", made by Matt Harding.  Harding set out to film himself dancing in as many different spots on Earth as he could get to, often joined by children, adults, and dogs, all simply expressing how wonderful it is to be alive.  It's set to the heart-wrenchingly gorgeous song "Praan" by Garry Schyman.  The music and the spirit of Harding's project could not blend together more perfectly.


So there you are.  Even when things are bad, people are still creating beautiful, funny, and whimsical things.  They still care about bringing joy into the world, despite the constant barrage of pain, discouragement, and bad news we're subjected to on a daily basis.  I don't know about you, but when I see things like this, it reminds me that humanity isn't as hopeless as it may seem at times.  It recalls the last lines of the beautiful poem "Desiderata," by Max Ehrmann, which never fails to bring me to tears, and which seems like a good place to conclude:


Nurture strength of spirit to shield you in sudden misfortune.  But do not distress yourself with dark imaginings. Many fears are born of fatigue and loneliness.

Beyond a wholesome discipline, be gentle with yourself.  You are a child of the universe, no less than the trees and the stars; you have a right to be here.

And whether or not it is clear to you, no doubt the universe is unfolding as it should.  Therefore be at peace with God, whatever you conceive Him to be.  And whatever your labors and aspirations, in the noisy confusion of life, keep peace in your soul.  With all its sham, drudgery and broken dreams, it is still a beautiful world.  Be cheerful.  Strive to be happy.

Posted by Gordon Bonnet at 1:58 AM