I'm kind of notorious for my inappropriate vocabulary, a habit I can at least in part blame on my dad, who spent 29 years in the Marine Corps.  My dad was a connoisseur of the creative swear word, but my mom (who had many fine qualities but was a bit of a prude) forbade him to use vulgar language when she was around.  My dad's solution was to invent new inappropriate interjections by using innocent English words that (when said with the proper inflection) sounded like swear words.  His favorites were "schist" and "fop."

"Watch your mouth!" my mom would say, after my dad snarled out "Fop!" after bending a nail for the fourth time.

My dad would then, in his Patient Voice, explain that "fop" was not a vulgarity, but meant "a prissy and dandified gentleman."

"Nothing wrong with that, is there, Marguerite?" he'd conclude with an innocent smile.

All of which probably left my mom feeling like swearing herself, not that she ever would have.

So I grew up in a house where swearing was definitely frowned upon.  You can imagine my delight, then, when I read a piece of research supporting the claim that swearing improves your muscular strength, pain tolerance, and stamina.

In an experiment that must have been a riot to conduct, Richard Stephens of the University of Keele led a team that studied two groups of people, each trying to accomplish a task that took power and perseverance.  Some were asked to pedal an exercise bike on a hard uphill setting; others had their grip strength tested.  Half of the test subjects were instructed to utter neutral words, and the other half were told to turn the air blue. 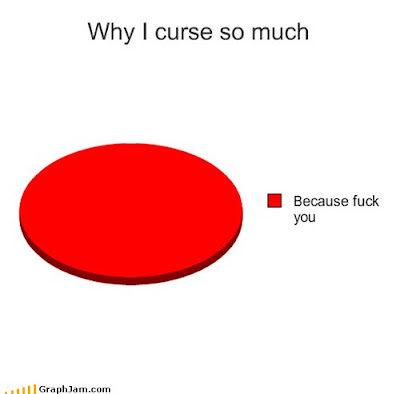 The results were unequivocal.  The individuals who were allowed to swear performed significantly better -- their peak power on the exercise bike exceeded that of the control group by 24 watts, and their grip strength increased by almost five pounds.

"Quite why it is that swearing has these effects on strength and pain tolerance remains to be discovered," Stephens said.  "We have yet to understand the power of swearing fully...  A possible reason... is that it stimulates the body's sympathetic nervous system.  That's the system that makes your heart pound when you are in danger.  If that is the reason, we would expect swearing to make people stronger too, and that is just what we found in these experiments."

"Swearing has been around for centuries and is an almost universal human linguistic phenomenon," Stephens said.  "It taps into emotional brain centers and appears to arise in the right brain, whereas most language production occurs in the left cerebral hemisphere of the brain.  Our research shows one potential reason why swearing developed and why it persists."

So there you have it.  Bad language as a way of increasing your strength and decreasing your discomfort.  My first 5K race of the season is a week from today, and I'm gonna try it out.

Next Saturday, if you see a tall skinny blond guy running along, muttering, "Fuck, fuck, fuck this, fuck it all" under his breath, you'll know it's just me running an experiment.
Posted by Gordon Bonnet at 2:51 AM