Music of the spheres

When I went to graduate school, I think the most surprising thing for me was that we were supposed to think creatively about science.  While I had, for the most part, excelled in my science classes in high school and college, they had mostly required me only to master concepts and then be able to demonstrate my mastery on an exam.  I had never had to synthesize, put ideas together in a novel way, apply concepts from one field in an entirely different one.  Nor had I been expected to critique ideas or arguments; I had merely been expected to understand them.

So my leap into the Graduate School of Oceanography at the University of Washington was a bit of a rude awakening, and was (on the whole) kind of a failure.  I was not, at that point in my life, prepared intellectually for the challenge of applying scientific ideas in a creative way, largely because I'd never had any practice in doing so.

No wonder, then, that I lasted exactly one semester in the School of Oceanography

I have since come to appreciate the role of creativity, lateral "outside of the box" thinking, and pure cleverness in approaching scientific questions.  I still suspect I wouldn't be very good at it -- on the whole, I think it was a good decision to leave the educational track headed toward research -- but at least I understand now that in science, the capacity for creative synthesis is as important as pure knowledge.

I ran into an especially good example of that yesterday, in a field that has always been a source of fascination for me; the study of exoplanets.  There have thus far been over a thousand exoplanets discovered, with new ones being reported all the time.  The most exciting part is when one is found that is in the "Goldilocks Zone" (not too hot, not too cold, juuuuuussst right), where liquid water can exist, and therefore where life is thought to be far more likely.

One of the most exciting planetary systems so far discovered is called "Trappist-1," and is about forty light years from Earth.  Trappist-1 has no less than seven Earth-sized planets, at least a few of which are thought to be in the habitable zone.  But the coolest thing about the Trappist-1 system is that an astrophysicist has explained the relative rates of revolution of the seven planets...

... using principles of harmony in music. 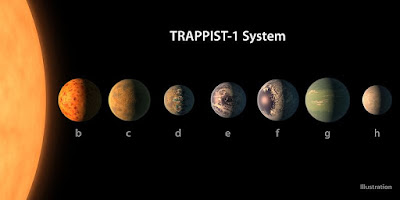 What's funny about this is that famed astronomer Johannes Kepler nearly drove himself insane trying to show that the orbits of the planets in our Solar System were connected somehow to the "five Platonic solids" -- cube, octahedron, tetrahedron, dodecahedron, and icosahedron -- thereby proving that there was some divine order in the heavens rather than (as it appeared) the planets all orbiting at different distances in a seemingly random fashion.  He wrote a book called the Mysterium Cosmographicum (Secret of the Universe) elaborating on this theory.  (Kepler had evidently never heard that Brevity Is The Soul Of Wit, because the full title of his book is 46 words long, which is why everyone just calls it the Mysterium Cosmographicum.)

In any case, Kepler's attempt at forcing the Solar System into a pattern based on the five Platonic solids was a complete flop, and it was only after he abandoned this idea that he made the discovery for which he became famous -- that planets travel in ellipses, not circles, and that regardless of the distance they are from the Sun, their orbits sweep out equal areas in equal times.

In a discovery that would have warmed the cockles of Kepler's heart, a team of astronomers, led by Daniel Tamayo of the University of Toronto-Scarborough, just published a paper last week in Astrophysical Journal Letters suggesting that while the orbits of planets have nothing to do with the five Platonic solids, they do have something to do with the phenomenon of resonance -- when the oscillation of one body influences the oscillation of another.  Tamayo found that the seven planets around Trappist-1 are in stable orbits because they are in a resonance pattern that resembles the relationships between frequencies of notes in a chord.  For example, the second planet in the system completes five orbits in the time taken for the innermost planet to make eight; the fourth planet makes two revolutions every time the third one makes three; and so on.  The combined effect of this is to make the entire system operate in a regular, predictable fashion.

The coolest part of this is that Tamayo turned the periods of revolution for all seven planets into musical notes, with the relationships between the pitches representing the ratios between the period length.  You can hear his recording of the musical representation of the Trappist-1 system at the link above.

You'll be listening to the actual music of the spheres.

"I think Trappist is the most musical system we'll ever discover," said Matt Russo, who is a member of Tamayo's team as well as being a musician, and who designed computer simulations of planetary systems in musical resonance (and ones that were not) to see if they remained stable over time.

Tamayo compared resonance in a planetary system to musicians in an orchestra.  "It's not enough for members merely to keep time," he said.  "Simulating the formation of a system in its birth disk is analogous to an orchestra tuning itself before playing.  When we create these harmonized systems, we find that the majority survive for as long as we run our supercomputer simulations."

So there you have it; a melding of music and astrophysics.  I find myself in awe of this sort of research, mostly because I can't imagine my coming up with an idea this creative myself.  So maybe it's best I decided on teaching and writing as a career.  I may not have much of a facility for connecting disparate concepts myself, but I certainly love to tell others about the delightful research of people who do.
Posted by Gordon Bonnet at 2:05 AM