One language to rule them all

The aphorism "No matter what you know, there's always more to learn" is something you'd be likely to see on one of those cheesy "motivational posters" that cheery type-A personalities like to pin up on office walls, but there's a lot of truth to it.  I rather prefer the formulation credited to Socrates -- "The more I know, the more I realize how little I know."

I ran into a fun example of this principle yesterday, when a member of the online linguistic geekery group Our Bastard Language posted an article from The Public Domain Review called "Trüth, Beaüty, and Volapük," about a constructed language (or "conlang," in the lingo of the field) called Volapük that I had never heard of before.

My M.A. is in linguistics, but my field of study was historical/reconstructive linguistics (my thesis was about the effects of the Viking invasions on Old English and Old Gaelic, and should have won some kind of award for research that has absolutely no practical application).  But even though conlangs aren't my specialty, I've always had a fascination from them.  There are a remarkable number out there, from the familiar (Esperanto, Klingon, Elvish) to the obscure but fascinating (such as John Quijada's Ithkuil, which attempts to express concepts in a combinatory way from the smallest possible number of root words). 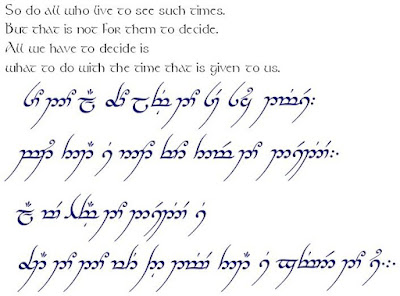 But despite my interest in conlangs, I had never run across Volapük, which is strange because next to Esperanto, it's apparently one of the most studied constructed languages ever created.  It was the invention of a German priest named Johann Schleyer, who not only wanted to create a regularized speech that came from familiar roots (to Europeans, anyhow) and was easy to learn, but was also "beautiful sounding."  Schleyer had an inordinate fondness for umlauts, which he added because he thought that "A language without umlauts sounds monotonous, harsh, and boring."

Which reminds me of the credits in Monty Python and the Search for the Holy Grail, especially the "A mööse once bit my sïster" part.  One of Schleyer's contemporaries couldn't resist poking some gøød-natured fün at him over his umlautophilia, and published the following limerick in the Milwaukee Sentinel:


A charming young student of Grük
Once tried to acquire Volapük
But it sounded so bad
That her friends called her mad,
And she quit it in less than a wük.

To my ears, it doesn't sound bad at all, and kind of has a Scandi-Slavic lilt to it.  Here's a sample:


The author of the article in The Public Domain Review, Arika Okrent, attributes the relative failure of Volapük to its plethora of umlauts and the easier word roots of its competitor Esperanto, which currently has about two million fluent speakers (an estimated 1,000 of which learned it as their first language).  I'm a little doubtful about that; certainly umlautiness hasn't discouraged anyone from learning Finnish.  I think it's more that the idea of a universal language is one of those high-flown ideals that won't ever catch on because most people are going to be resistant to giving up their native tongue in favor of an invented system of speech, however easy it is to learn.  Language is such a deep part of culture that to jettison our own mode of communication runs counter to every social instinct we have.  (Note that one of the most common things conquerors do to conquered people is to outlaw the speaking of the native language -- it's a sure way to deal a death blow to the culture.)

Even so, I find the whole conlang thing fascinating, and was tickled to run across one I'd never heard of.  Every so often I have students who participate in an independent study class I teach in introductory linguistics, and the final project is to invent the framework of a language -- a phonetic and phonemic structure, morphological scheme, and syntax, along with a lexicon of at least a hundred words.  They then translate a passage from English into their language.  (One of the best ones I've ever seen did a charming translation of Eric Carle's The Very Hungry Caterpillar.)

The result of this project is twofold -- students find out how hard it is to create a realistic language, and they learn a tremendous amount about the structure of our own language.  And that's just from producing a rudimentary skeleton of a language.  For people like Schleyer, who created a rich and fully functional language, it was the result of many years of devotion, hard work, and love for language itself.

So it's kind of a shame that people didn't appreciate Volapük more.  Schleyer's dream of having a language that would bring the entire world together in a common mode of communication may be as far off as ever, but even so, it's a beautiful dream.  Even if it would mean making friends with the mäjestïc ümlaüt.
Posted by Gordon Bonnet at 2:06 AM