Politics in the pulpit

New from the "Wow, You Really Didn't Think That Through All That Well, Did You?" department, we have: Texas Governor Greg Abbott signing into law a bill that will prevent the government from subpoenaing pastors based upon what they say in the pulpit.

This is yet another one of the so-called "Religious Freedom" laws, designed to give carte blanche to anyone who does anything as long as it's part of their religion.  Want to discriminate against someone?  Claim that your religion considers the person a sinner.  Want your kid to get out of having to learn about other cultures or other beliefs in school?  Claim that your religion considers the knowledge of such information a threat.

Or, now: want your pastor to be able to stump for a political candidate?  Claim that preventing him/her from doing so is allowing the government to "pry into what goes on in churches."

That, at least, is how Governor Abbott sees it.  Upon signing the bill, Abbott said:


Freedom and freedom of religion was challenged here in Houston, and I am proud to say you fight back from the very beginning... Texas law now will be your strength and your sword and your shield.  You will be shielded by any effort by any other government official in any other part of the state of Texas from having subpoenas to try to pry into what you’re doing here in your churches.

Which brings up a problem that I think about every time someone starts snarling about how much better it was when we had prayer in schools.  My first question would be, "What kind of prayers?"  Because generally the religion people want in schools -- and in all the arenas of public life -- is just one religion, namely their own.  It's curious how a lot of the same people who would love to see prayers to the Christian god reinstituted in public schools pitch an unholy fit when students even learn about Islam, and would probably spontaneously combust if students were told to bow down and pray to Allah. 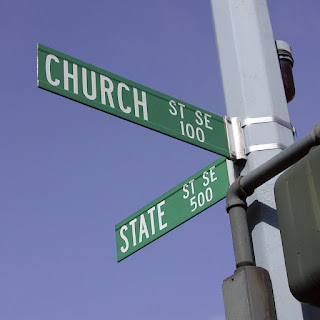 Which is the problem with Abbott's new law.  Are the pastors who are now protected from subpoenas based on what they preach only the Christian pastors?  Because this law could easily be invoked to protect extremist Muslim mullahs preaching "Death to America" from their pulpits.  The whole idea of separation of church and state is that you are free to subscribe to whatever religion you choose, or no religion at all, and all religions are treated equally under the law.  What Abbott clearly intends here is that Christian churches have rights that other institutions do not have.

And the reason Abbott and the bill's author, Senator Joan Huffman of Houston, came up with this is abundantly clear.  There is an increasing push by evangelical Christians to consolidate their power in order to influence political races.  They wielded considerable clout in the last presidential election; without people like Franklin Graham and Jerry Falwell, Jr. throwing their support behind Trump, you have to wonder if the election might not have gone the other way.  Some preachers went even further, and said that if you don't vote for Trump, you are committing a sin because you're going against God's Chosen One.

How a narcissistic, sociopathic, adulterous compulsive liar ever got to be God's Chosen One is beyond me.  But there you are.

Myself, I have no problem with a church getting involved with politics, as long as it brings with it the price of losing tax-exempt status.  Once churches become the religious arm of a political party, they should be paying taxes on donations the same way any other political organization does.

But Abbott would probably consider that "religious persecution."

So this is a law that is inherently unfair in intent, almost certainly will be unevenly enforced if it's enforceable at all, and is likely to be challenged in the courts in any case.  Another exercise in governmental waste of time, solely to grandstand a little and appease Abbott's hyperreligious base.

Because, apparently, our elected officials have nothing better to do.
Posted by Gordon Bonnet at 2:11 AM