It has gotten lately that I can't look at the news without repeatedly screaming, "What the hell is wrong with you people?"

And I'm not talking here about people doing bad stuff themselves, although there is certainly enough to scream about in that category, too.  I'm talking about people being willing to cast their votes for idiots, liars, moral degenerates, and people who are out-and-out batshit crazy, so that they can get into government and do bad stuff on a grander scale.

Let's start at the top, with the President of the United States.  Donald Trump has been involved in cringe-worthy stuff on a daily basis since the American electorate chose for some reason to elect a narcissistic compulsive liar to the highest office in the land, but I don't think I've cringed quite so hard as I did yesterday.  Because Trump, who when he was in kindergarten evidently never learned the rule "Don't budge," said, "Move," and shoved his way in front of the Prime Minister of Montenegro so he could be at the front of the photo-op.  And because that wasn't humiliating enough, he gave one of his typical poorly-informed, word-salad speeches at a meeting of NATO leaders -- and it was so bad that the other members laughed at him and rolled their eyes. 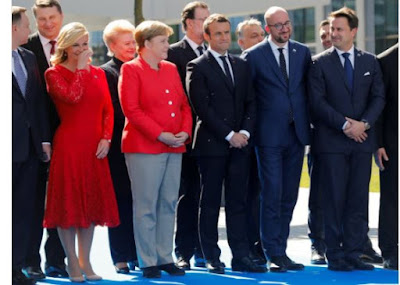 How's that Making America Great Again going for you these days, Trump voters?  It's turning out to be more Making America An International Laughingstock, as far as I can see.

It's not only things happening overseas that are making me wonder if I should admit that I'm an American when I visit South America this summer.  There's enough crazy shit happening right here on American soil for me to fill ten blog posts with non-stop ranting.  In the interest of brevity, let's just look at two.

First, this week lawmakers in Arizona saw fit to appoint one Sylvia Allen as chairperson of the State Education Committee.  Allen, who gives every appearance of being only marginally sane, has appeared in Skeptophilia before; first for babbling about chemtrails during a hearing about mine safety, and then for blurting out, during a hearing about laws governing concealed weapons, that all of the problems in the United States would be solved if we just made church attendance mandatory.

Oh, and did I mention that she's a young-Earth creationist?  There's that.

This, Dear Readers, is the person who will be overseeing the education of children in an entire state.

But nothing pegged my Rage-O-Meter quite as much as when I found out that Greg Gianforte had won the special election to fill the seat in the House of Representatives vacated when Ryan Zinke was appointed Secretary of the Interior.  Why is this infuriating?

Because two days ago, Gianforte assaulted a reporter.  In front of a large crowd.

Which, you'd think, would have been the end of it.  Game over, Gianforte loses.

But no.  Exit pollsters asked voters if the incident had changed their vote... and almost no one said it had.  One person even said, "It's about time our politicians start standing up to these damn reporters."

So Gianforte went on to win the election by a six-point margin, with crowds cheering "You're forgiven!" when he brought up the assault in his election speech.  It's reminiscent of the comment Donald Trump made last summer, that he could "shoot someone in Times Square" and not lose a bit of his support.

Oh, and did I mention that Gianforte is also a young-Earth creationist?  There's that.

It's getting to the point that I regret it every time I look at the news, because I'm bombarded by more examples of how credulous and ignorant a significant slice of my countrymen are -- and how willing they are to overlook immorality, sociopathy, anger management issues, dishonesty, and downright looniness from the people they vote for, as long as the candidates trot out the party line.  "Values voters."  "Patriotism."  "Religious freedom."  "Small government."  "Deregulation."

And, as I mentioned earlier, "Make America Great Again."

As long as you say the magic words, it doesn't matter what you do.  The voters will still follow right behind you, mooing loudly, and pull the lever on your behalf.

Even writing this is making me have to check my blood pressure.  So I'll end this here, by simply repeating what I started with: What the fuck is wrong with these people?
Posted by Gordon Bonnet at 2:11 AM