The fact of the matter

A couple of days ago I made the mistake of participating in that most fruitless of endeavors: an online argument with a total stranger.

It started when a friend of mine posted the question of whether the following quote was really in Hillary Clinton's book, It Takes a Village: 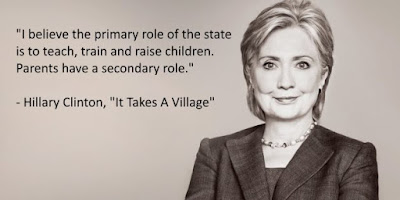 It isn't, of course, and a quick search was enough to turn up the page on Snopes that debunks the claim.  I posted the link, and my friend responded with a quick thanks and a comment that she was glad to have the straight scoop so that she wasn't perpetuating a falsehood.  And that should have been that.

And it would have been if some guy hadn't commented, "Don't trust Snopes!!!"  A little voice in the back of my head said, "Don't take the bait...", but a much louder one said, "Oh, for fuck's sake."  So I responded, "Come on.  Snopes is one of the most accurate fact-checking sites around.  It's been cross-checked by independent non-partisan analysts, and it's pretty close to 100% correct."

You'd think at this point I'd have figured out that I was talking to someone who learned his debate skills in Monty Python's Argument Clinic, but I am nothing if not persistent.  I found the analysis I had referred to in my previous comment, and posted a clip from a summary of it on the site Skeptical Science:


Jan Harold Brunvand, a folklorist who has written a number of books on urban legends and modern folklore, considered the site so comprehensive in 2004 as to obviate launching one of his own.[10]

David Mikkelson, the creator of the site, has said that the site receives more complaints of liberal bias than conservative bias,[23] but insists that the same debunking standards are applied to all political urban legends.  In 2012, FactCheck.org reviewed a sample of Snopes’ responses to political rumors regarding George W. Bush, Sarah Palin, and Barack Obama, and found them to be free from bias in all cases.  FactCheck noted that Barbara Mikkelson was a Canadian citizen (and thus unable to vote in US elections) and David Mikkelson was an independent who was once registered as a Republican.  “You’d be hard-pressed to find two more apolitical people,” David Mikkelson told them.[23][24]  In 2012, The Florida Times-Union reported that About.com‘s urban legends researcher found a “consistent effort to provide even-handed analyses” and that Snopes’ cited sources and numerous reputable analyses of its content confirm its accuracy.[25]

And he responded, "I disagree with you, but I respect your right to your opinion."

But whether Snopes is accurate or not is not an opinion.  It is either true, or it is not.  It's a little like the "flat Earth" thing.  If you believe, despite the overwhelming evidence, that the Earth is anything but an oblate spheroid, that is not "your opinion."

You are simply "wrong."

Now, I hasten to add that I don't think all of my own beliefs are necessarily correct.  After all, I haven't cross-checked Snopes myself, so I'm relying on the expertise of Brunvand et al. and trusting that they did their job correctly.  To the best of my knowledge, Snopes is accurate; and if anyone wants me to think otherwise, they need to do more than say "No, it isn't" every time I open my mouth.

But to call something like that an "opinion" implies that we all have our own sets of facts, even though many of them contradict each other, with the result that we all do what writer Kathryn Schulz calls "walking around in our little bubbles of being right about everything."  It's a little frightening how deep this mindset goes -- up to and including Donald Trump's shrieking "Fake news!" every time he hears something about him or his administration that he doesn't like.

I can understand wanting reality to be a different way than it is.  Hell, I'd rather teach Defense Against the Dark Arts at Hogwarts than biology in a public high school.  But wishin' don't make it so, as my grandma used to say, and once you grow up you need to face facts and admit it when you're wrong.  And, most importantly, recognize that the evidence won't always line up with your desires.  As President John Adams put it, "Facts are stubborn things.  Whatever our wishes, inclinations, and passions, they cannot alter the facts and the evidence."