If there's one thing I understand least about the whole sad spectacle of the Trump administration, it's the fact of his being embraced so warmly (and staunchly) by evangelical Christians.

In fact, they are able to look past all of this so much that just last week, Trump was the commencement speaker at Liberty University, which shares with Bob Jones University the moniker "The Buckle on the Bible Belt."  Liberty University was founded by Reverend Jerry Falwell, who also founded the Moral Majority back in the late 70s, and it's run today by Falwell's son, Jerry Jr. -- who called Trump "a successful executive and entrepreneur, a wonderful father and a man who I believe can lead our country to greatness again." 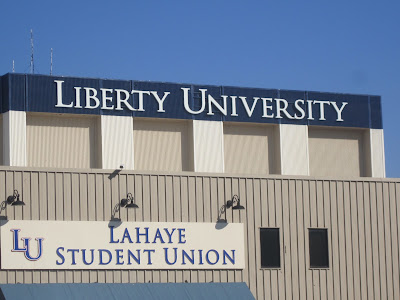 So Trump gave a speech that talked up how wonderful and religious he was, and how he'd Make America Great Again, conveniently glossing over the current horrific chaos he's led our government into during the last few weeks.  Here is an excerpt:


Be totally unafraid to challenge entrenched interests and failed power structures.  Does that sound familiar, by the way?  Relish the opportunity to be an outsider.  Embrace that label.  Being an outsider is fine.  Embrace the label, because it’s the outsiders who change the world and who make a real and lasting difference.  The more that a broken system tells you that you’re wrong, the more certain you should be that you must keep pushing ahead...  As long as I am your president, no one is ever going to stop you from practicing your faith or from preaching what is in your heart...  In America, we don’t worship government.  We worship God.

At this point, I'd have leaped up and shouted, "Define we, buster!"  But apparently most of the Liberty University graduates simply smiled and nodded -- in fact, one of them commented afterwards that Trump had given a "kickass speech."

Not everyone was so positive, however.  Twitter erupted in a storm of tweets, many of them from Christians who are outraged by the fact that a man whose most outstanding characteristic is embodying all Seven Deadly Sins in one person has somehow become a spokesperson for the political arm of evangelical Christianity.

Here are a few of the most acerbic comments:
Which is it exactly.  The only conclusion I can come to is that people like Falwell Jr., Franklin Graham, Jim Bakker, and Ralph Reed are supporting Trump for one reason and one reason only; they're rich, powerful men, and under a Trump presidency they're convinced they'll become richer and more powerful.  In other words, they don't give a rat's ass for values or morals, and never have.  All they care about is expanding their own empires, and they believe that hitching their wagon to Donald Trump will further that aim.

Which is kind of pathetic, because it means that they share another characteristic with Trump: the capacity for bald-faced lies.  They have their congregations, followers, and listeners hoodwinked into thinking that they are actually committed to moral behavior.  And somehow, they've succeeded in that deception, given the fortunes they've amassed (mostly due to contributions from their flock), and the power they wield in the religious world.

Lie, lie, lie until you succeed.  The same as Trump himself.

I keep hoping that the truly moral Christians -- which, I believe, are the vast majority -- will wake up and recognize the man they're following for the egomaniacal, sociopathic narcissist he actually is.  But there, we have the sunk-cost fallacy working against us; so many of them have put so much time and effort into supporting Trump and seeing that he got elected president, that to backpedal now would be agonizing.

But I don't see any other way that our nation can get out of the slow-motion train wreck it's currently involved in.

The whole thing puts me in mind of a quote from C. S. Lewis, from his book The Great Divorce:

I do not think that all who choose wrong roads perish; but their rescue consists in being put back on the right road.  A sum can be put right: but only by going back til you find the error and working it afresh from that point, never by simply going on.  Evil can be undone, but it cannot 'develop' into good.  Time does not heal it.  The spell must be unwound, bit by bit, 'with backward mutters of dissevering power' -- or else not.