Who watches the watchers?

A nearly universal, and rather creepy, sensation is when you turn to look at a stranger -- and find that they were watching you.

This "feeling of being watched" is something we all have experienced from time to time.  I seem to notice it most when I'm driving on the freeway, and happen to glance at the car next to me.  I can remember many times when either the person in the next car was already looking at me -- or else, even creepier, they turn their head toward me at exactly the same time.

However odd this feels, I've always felt like there was a perfectly rational reason for this, and my sense was that it's yet another example of dart-thrower's bias -- the perfectly natural human tendency to pay more attention to (or overcount) the hits, and ignore (or undercount) the misses.

In this case, how many times do you glance at a car next to you on the freeway, and the person in the car is not looking at you?  We don't remember it precisely because it happens so often.  On the other hand, on those rare occasions where someone is looking at us, it stands out -- and is given more weight in our memories. 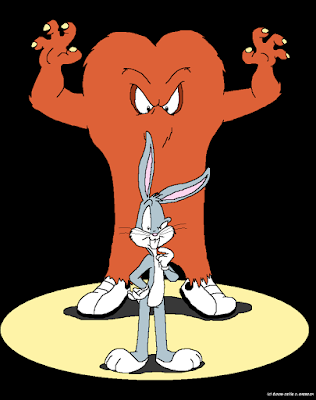 "Uhhh... did you ever have the feeling that you was bein' watched?"

There's another possible explanation, however, and it has to do with an oddity of our perceptual systems only recently discovered because of a peculiar disorder called "blindsight," in which an individual is functionally blind, but can still perceive some visual stimuli.

Blindsight occurs when a person's visual cortex is damaged, usually by a stroke, but his/her eyes and optic nerve are still intact.  In a dramatic study led by Alan J. Pegna of Geneva University Hospital (Switzerland), it was found that although they are unresponsive to most visual stimuli, people with blindsight still exhibit visual phenomena like "emotional contagion" -- the tendency of people to match the emotions of faces they're looking at.

Apparently, this happens because the information from the eyes does not just travel to the visual cortex, it goes to a variety of other places in the brain, including the limbic system, which is the seat of emotion.  So a person might be able to match the smile in a photograph of a smiling person -- while not, technically, being able to see the photograph.

Pegna's study showed that not only are people with blindsight able to detect the emotion in a face they are (not) seeing, they can also tell when someone is looking at them.  Scanning results of a patient with blindsight showed increased activity in the amygdala -- the part of the limbic system that controls anxiety and fear -- when he was being watched.

So the conjecture is that there may be something more to the sensation of being watched than simple dart-thrower's bias.  It might be that when someone in our peripheral visual field is watching us, it doesn't register in our conscious awareness (through the visual cortex), but our nervous and ever-watchful amygdala still knows what's going on.  And since the limbic system largely functions subconsciously, it feels as if we had some kind of psychic awareness of something we didn't actually see.

Meaning that once again, we have a rational explanation (two, actually) of something that seems like it must be paranormal.  In other words: science wins again.  I have to wonder if something like this might be responsible for some other perceptual oddities, such as déjà vu, about which I have been curious for years but never seen a particularly convincing explanation.

In any case, it's something to keep in mind, for next time you're in a crowded restaurant and you see someone across the room staring at you.  It could be that your amygdala just went onto red alert.  It could also be that people are looking at you because you're drop-dead sexy.  You're welcome to go with whichever explanation you prefer.