Time is running out

Today I was going to tell you about the conference of exorcists meeting in Poland to tackle the worldwide problem of vampires, but a much more pressing issue has arisen that I need to discuss while I have the time.

The issue is that time is speeding up.  I'm sure we've all noticed this.  It's becoming harder and harder to get everything done that needs doing, and there just seem not to be enough hours in the day.  Well, according to a story that popped up in my news feed today... there aren't.

The article, entitled "Is Time Speeding Up?", contains the following paragraphs:


Einstein’s calculations showed that the closer an object comes to the speed of light, the slower time passes.  Scientists have done experiments that prove Einstein’s theory to be correct using clocks moving at different speeds.

The opposite then must be true that as our speed decreases, time speeds up.  Researcher Greg Braden confirms this, he says that the rotation of the Earth is slowing down, and time is speeding up.  Evidence for his assertions comes from the Schumann Resonance.  The Schumann Resonance is like the Earth’s heartbeat.  It is the Extremely Low Frequency (ELF) of the Earth’s magnetic field. In the 1950’s, when the Schumann resonance was discovered, it was recorded to be an average of 7.8 Hertz.  It has been stable for thousands of years; but now, according to Swedish and Russian researchers, says Braden, it is an average of 12 Hertz.  This means that the normal 24-hour day feels like a 16-hour day.

Okay.  I mean, my only question would be, "What the fuck?"  The Schumann resonance is an atmospheric phenomenon, an electromagnetic resonance caused by lightning discharges in the ionosphere.  And even if the frequency of the resonance is increasing (which I could find no credible evidence of in any case), there's no way we could know if it's been stable "for thousands of years," because it was only discovered in 1952.  And anyway, why would this have anything to do with how fast time is passing?

That doesn't stop "researcher Greg Braden," who says that if you think that's amazing, you ain't seen nothin' yet:

Eventually, Greg Braden says, the Earth’s rotation around the sun will stop and start rotating in the opposite direction...  Braden says that when the Schumann resonance hits 13 Hertz, time will speed up to infinity.  The outcome of this has been explained as those living at this time will experience a shift in consciousness.  There will be no ‘separation’ between this mortal existence and the spirit realm.  Some call it ascension.

Some also call it "bullshit."

Anyhow, I decided to do a little research, and it turns out that this is only scratching the surface of the "accelerating time" theory.  There was one post from a guy whose proof that time is speeding up was that the clock in his bedroom is running fast.  Another said that he knew time was speeding up because he used to be able to say "One Mississippi, two Mississippi," and keep up with the seconds ticking on his clock, and now he can't.  But by far my favorite commentary I found on the topic came from a guy who evidently thinks that time is like a giant cosmic game of tetherball.  He gives this convoluted explanation of a ball hanging on a string tied to a rotating pole, and as the string winds around the pole, the ball spins faster (i.e. time speeds up), and the string gets shorter and shorter and the ball spins faster and faster and then finally SPLAT the ball hits the pole.

At that point, he says, "the Galactic Alignment... with the heart of the galaxy will open a channel for cosmic energy to flow through the earth, cleansing it and all that dwells upon it, raising it to a higher level of vibration."

So at least that's something to look forward to. 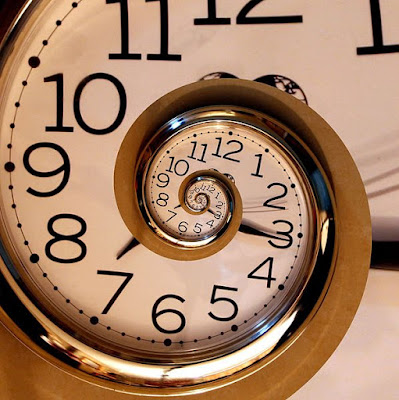 Interestingly, the whole subject has even permeated discussions on physics forums.  In one thread I looked at, titled "Universe Expanding or Time Speeding Up?", there were a bunch of woo-woos who blathered on for a while about the expansion of the universe and how time would have to speed up to "compensate" for the expansion of space, and so on, and finally one reputable physicist responded, in some exasperation, "Most of the responses above are gibberish.  No one has even asked the question, 'Speeding up relative to what?'  General Relativity established that time passes at different rates in different reference frames, but these posters seem to think that time as a whole is speeding up -- which is a meaningless proposition, since there is nothing outside of time against which you could detect such a change."

Well. I guess he told them.  Of course, it won't make any difference, because people who think this way are never going to believe some dumb Ph.D. in physics when they've got the whole internet to rely on.  Besides, this physicist is probably a reptilian alien Man-in-Black from the Planet Nibiru who is part of the Bilderberg Group and works for HAARP, and is trying to spread disinformation.  You know how that goes.

So anyway, that's today's heaping helping of pseudoscientific absurdity.  I think I'll wrap this up, because (1) if I read any more websites like the ones I had to peruse to write this, my brain will turn into cream-of-wheat, and (2) I'm running short on time.
Posted by Gordon Bonnet at 2:58 AM