Insomnia sucks, something I am frequently heard to mutter under my breath at 3:30 AM.  I've been a bad sleeper for decades, and have not been able to figure out any particular pattern to it -- I have sleepless nights on days I've gotten lots of exercise and days I haven't, after spending several hours of staring into the computer screen and not, after drinking alcohol and not.  Nothing has really worked to alleviate it, although when I am desperate I take a Benadryl tablet, which works well even though it's something I don't like to do often.  (In fact, taking Benadryl works so well that after taking one, it's a miracle I make it back to bed before I pass out, to be found the next morning on the floor in the hallway in a puddle of drool.)

Sleep is critical to health, both mental and physical, but scientists have been working for ages to try and elucidate why.  It's known that when deprived of sleep short-term, people are groggy, irritable, and perform more poorly on every cognitive assessment there is; long-term sleep deprivation causes hallucinations, paranoia, and (ultimately) death.  Further, sleep is not the same as simple bodily relaxation; in some phases of sleep, the brain is as active as it is during wakefulness. 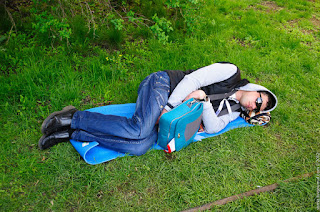 [image courtesy of photograph Evgeniy Isaev and the Wikimedia Commons]

It's been suggested -- and there is some experimental evidence to support it -- that sleep has something to do with memory consolidation.  It's been shown pretty conclusively that if you want to improve cognitive performance on a test, studying the night before and getting a good night's sleep works far better than spending an equal amount of time studying the day of the test.  I wish I'd known this back in college, where I was known to do things like doing my first and only studying for my 8 AM sociology midterm on the bus en route to school.

This doesn't, however, explain sleep's function in other animals, as few fluffy bunnies are known to take sociology classes.  But a study published last week in Nature: Communications has shown that sleep definitely influences memory -- even to the extent of fostering the formation of new memories while we're asleep.


Sleep and memory are deeply related, but the nature of the neuroplastic processes induced by sleep remains unclear.  Here, we report that memory traces can be both formed or suppressed during sleep, depending on sleep phase.  We played samples of acoustic noise to sleeping human listeners.  Repeated exposure to a novel noise during Rapid Eye Movements (REM) or light non-REM (NREM) sleep leads to improvements in behavioral performance upon awakening.  Strikingly, the same exposure during deep NREM sleep leads to impaired performance upon awakening.  Electroencephalographic markers of learning extracted during sleep confirm a dissociation between sleep facilitating memory formation (light NREM and REM sleep) and sleep suppressing learning (deep NREM sleep).  We can trace these neural changes back to transient sleep events, such as spindles for memory facilitation and slow waves for suppression.  Thus, highly selective memory processes are active during human sleep, with intertwined episodes of facilitative and suppressive plasticity.

It's important to add, however, that experiments involving attempts to learn something complex -- such as a foreign language -- while you're asleep have all been abject failures.  The (alleged) phenomenon, called hypnopaedia, was all the rage back in the 1920s and 1930s, when people not only used it to try to learn, they used it to modify how they were perceived by others.  One such program, developed by hypnopaedia's main proponent, New York psychologist A. B. Saliger, was designed to help people get laid.  It involved listening while asleep to the following message played over and over:  "I desire a mate.  I radiate love...  My conversation is interesting.  My company is delightful. I have a strong sex appeal."

Unfortunately, all that this accomplished was making the test subjects wake up even hornier than they were before.

Study author Thomas Andrillon is cautious about applications of his work to the practical world.  "The sleeping brain is including a lot of information that is happening outside, and processing it to quite an impressive degree of complexity," Andrillon said.  But as far as using this research to facilitate the development of methods to influence memory in a bigger way, he added, "We are in the big unknown...  Keep in mind that sleep is not just about memory.  Trying to hijack the recommended seven-plus hours of sleep could disrupt normal brain function."

Which I can certainly attest to, as I rarely if ever get seven hours of uninterrupted sleep, and I don't think I've ever had the word "normal" applied to my behavior.  I have to admit that the Andrillon et al. research is fascinating, however, not least because it gives us another piece of the puzzle of why all higher animals sleep.

Now you'll have to excuse me, because I got about three hours of sleep last night, and I think I'm gonna go take a nap.
Posted by Gordon Bonnet at 2:45 AM