There's a general rule of debate, and it goes something like this: you don't score any points by picking out some absurdly weak line of reasoning, characterizing your opponents as holding that view, arguing against it, and claiming victory.

This is called the straw-man fallacy, and is all too common.  It's why we have conservatives arguing that all liberals want to give away America to illegal immigrants, lock, stock, and barrel.  It's why we have liberals arguing that all conservatives want to sell us out to big corporations, and along the way, deny rights to everyone but white Christian males.

The truth, of course, is more nuanced than that on both sides, but this requires (1) thought, and (2) an admission that your opponents' views, when represented fairly, are worthy at least of intelligent consideration.  And that seems to be beyond a lot of people these days.

To take two examples of this -- one from each side of the aisle, to demonstrate that straw man arguments are no respecter of political leanings -- let's take a look at two different views of yesterday's eclipse.  Neither, I hasten to state, appears to be a parody, although you'd certainly be justified in thinking they might be.

First, we have a group called "Kentuckians for Coal," who actually protested the eclipse, claiming that even freakin' astronomical objects were conspiring to take attention away from the plight of coal miners.  The protest took place in Hopkinsville, which was along the path of totality, something that struck the Kentuckians for Coal as not being a coincidence.


Kentuckians for Coal is an ad-hoc coalition of miners, union officials, family members and coal users created to defend the Kentucky coal industry against encroachment from renewable energy industries and from economic development initiatives aimed at lessening America's dependence on coal.  Kentuckians for Coal stands against the eclipse and those who worship it.

Well, I think the eclipse is pretty cool, but "worship" goes a bit far.  And it's hard to see how you could be against clean, renewable energy.  I get that we're talking about people's livelihoods, here; but at some point, there needs to be a choice made whether a particular industry is worth saving when it's balanced against the long-term habitability of the Earth.  (And, I might add, that a lot of this would be moot if the government would step in and fund retraining of these out-of-work miners, and guarantee them jobs in the renewable energy industry, which is one of the fastest-growing professions in the United States.)

A few of the signs carried at the protest read as follows:
To their credit, the person carrying the last-mentioned sign was followed by someone carrying a sign saying, "That's what she said." 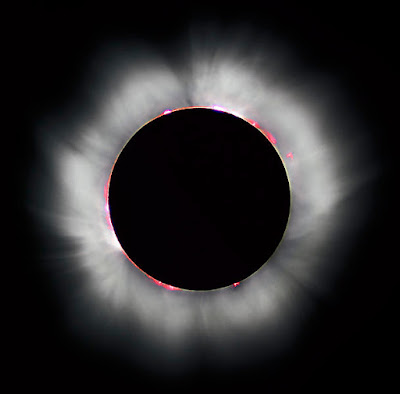 But lest the liberals in the studio audience start crowing about how much smarter and more sensible they are than the silly ol' conservatives, allow me to direct your attention to an article in The Atlantic by Brooklyn Law School professor Alice Ristroph, entitled, "Racial History in the Solar Eclipse Path of Totality," which says basically that the path of yesterday's eclipse was inherently biased against minorities.

Don't believe me?  Here's a sample:

It has been dubbed the Great American Eclipse, and along most of its path, there live almost no black people...  [A]n eclipse chaser is always tempted to believe that the skies are relaying a message.  At a moment of deep disagreement about the nation’s best path forward, here comes a giant round shadow, drawing a line either to cut the country in two or to unite it as one.  Ancient peoples watched total eclipses with awe and often dread, seeing in the darkness omens of doom.  The Great American Eclipse may or may not tell us anything about our future, but its peculiar path could remind us of something about our past—what it was we meant to be doing, and what we actually did along the way.

No, Professor Ristroph, what the Great American Eclipse reminded us of is that when something gets in front of the Sun, it casts a shadow.  End of story.

But that doesn't stop her from telling us about how terrible it is that the path of totality excludes minorities; in fact, the Moon seems to have chosen its path with deliberate bigotry in mind:


About a third of Kansas City, Missouri, is black, but most of the city lies just south of the path of totality. To get the full show, eclipse chasers should go north to St. Joseph, almost 90 percent white and about 6 percent black...

Moving east, the eclipse will pass part of St. Louis, whose overall population is nearly half black. But the black residents are concentrated in the northern half of the metropolitan area, and the total eclipse crosses only the southern half.

Of course, even by her own admission, her whole argument kind of falls apart when the eclipse gets to South Carolina, but by this time, any credibility she might have had is down the toilet anyhow.  So even if you got that far -- and the article is a long one -- I doubt that'd salvage whatever it was she was trying to point out.

Now don't misunderstand me.  There are huge racial inequities in the United States, and those deserve serious attention.  Likewise, apropos of the Kentuckians for Coal, the issue of displaced workers, poor communities, and lost jobs is not one we should scoff at.

But claiming the eclipse has a damn thing to do with either one is pretty fucking ridiculous, and you're not doing your argument any good by claiming that it does.

So the take-home message is, "let's keep our eye on the ball, shall we?"  If you want to draw attention to the plight of the unemployed or the problems of race and privilege, have at it.  But saying the whole thing boils down to astronomy is idiotic.  And throwing together a straw-man argument is not going to convince anyone who wasn't already convinced.
Posted by Gordon Bonnet at 3:35 AM