If I had to pick one technology that I think will make the most different to human quality of life thirty years from now, I would pick CRISPR/Cas9.

CRISPR stands for "Clustered Regularly Interspaced Short Palindromic Repeats," a sequence of repetitive DNA in prokaryotes (bacteria) that interacts with a gene called Cas9 to chop up and inactivate foreign DNA.  At first, it seemed like it would interest only someone with a fascination for bacterial genetics.

Then it was discovered that you could guide CRISPR/Cas9 to specific sequences in DNA using a piece of RNA as a guide.  Think of it as a pair of scissors with a laser sight.  Molecular biologists saw the implications immediately; with that tool, you could cut out any piece of DNA you wanted, insert new genes, inactivate old ones -- you veritably have a cut-and-paste function for the genetic code.

The potential applications to treat human disease are nearly endless.  Disorders where the affected individuals have an inoperative gene, and therefore lack the specific protein it produces, might have the error repaired by splicing in a corrected copy.  (Possible candidates for this are cystic fibrosis and hemophilia.)  On the other hand, disorders where the defective gene makes a damaged end product -- such as sickle-cell anemia and Huntington's disease -- might have the faulty gene cut out and discarded.

All of this is still in the future, however.  At the moment, scientists are playing with CRISPR, seeing what it can do.  And just last week, a team at Cornell University used CRISPR/Cas9 on butterflies to inactivate specific genes...

... and completely changed the color patterns on their wings.

One of the species they worked on was the Gulf Fritillary (Agraulis vanillae), a beautiful black, orange, and gold butterfly native to the southeastern United States. 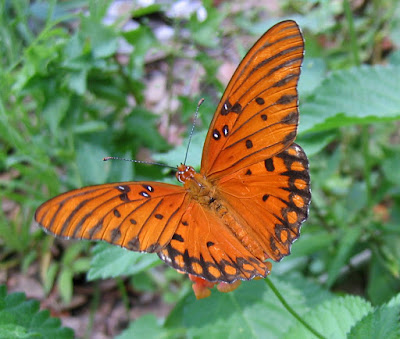 [image courtesy of photographer Jonathan Zander and the Wikimedia Commons]

Anyi Mazo-Vargas, one of the authors of the paper, calls genes like optix and WntA "paintbrush genes."  "Wherever you put them," Mazo-Vargas said, "you'll have a pattern."

They tested optix deletion on other species, and found similar results, even in species that have been evolutionarily separated for 80 million years.  Colorful butterflies come out looking monochrome. "They just turn grayscale,” said Robert Reed, who led the study.  "It makes these butterflies look like moths, which is pathetically embarrassing for them."

The fact that these genes can be inactivated, almost like flipping a switch, and have such body-wide results is nothing short of spectacular.  Of his earlier work in studying color genes in butterflies, Reed said, "It was convincing but we didn’t know exactly what these genes were doing. Without the ability to delete the genes, and see if their absence changed the butterfly wings, we didn’t have the final proof.  There’s been this frustrating wall that I’ve banged my head against...  CRISPR is a miracle.  The first time we tried it, it worked, and when I saw that butterfly come out ... the biggest challenge of my career had just turned into an undergraduate project."

Of their first success -- the jet-black-and-silver Gulf Fritillary -- Reed said, "It was amazing to see that thing crawl out of the pupa... it was the most heavy metal butterfly I've ever seen."

All of this is one more indication of why we should all be in support of pure research.  On one level, this might sound kind of silly to the layperson -- some scientists tinkering around and changing the color of butterfly wings.  But when you see where such research could lead, and the potential application to human health, it's absolutely stunning.

In my opinion, it won't be long before we're using the same genetic cut-and-paste not to fiddle with "paintbrush genes" in butterflies, but to repair genetic defects in humans.  And that would be the biggest leap in medical science since the invention of vaccines.
Posted by Gordon Bonnet at 2:11 AM