A ghost in the machine

Because we skeptics don't already have enough to make us twitch, now we have:

A company in Kentucky that will provide "untraceable hoaxing of paranormal activity."

The company, Kentucky Special FX, bills itself as follows:

Our staff has over forty years of combined experience in various fields of the special FX industry.  If you do not see an item listed that you need, please by all means, call us, as we spend a lot of our time tending to custom built orders.

Owner Mike Bisch is up front about the fact that his special effects expertise is sometimes used not to design scary scenes for Halloween, but to fool people into believing that ghosts are real.  Bisch said that he and his team are capable of "creating everything from equipment malfunctions, sudden temperature fluctuations, and appearing and disappearing apparitions for unwitting ghost hunters in haunted buildings."  He has, he says, designed paranormal hoaxes at the sites of legendary hauntings "over twenty times" without being caught out.

Bisch says he doesn't believe in the paranormal himself; unsurprising, given that he knows first hand how easy it is to fake.  Magicians are notorious for being skeptics (the best-known example being James "The Amazing" Randi).  But then he adds, "I'm a man of science."

And there I take exception.  No, Mr. Bisch, you are not.  You are a hoaxer, taking money to set up scenarios deliberately to hoodwink the gullible.  This is not science.  This is encouraging credulity, the exact opposite of what science is supposed to do. 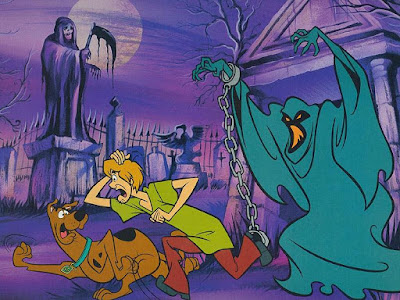 Okay, they were scared, but at least these guys knew that the ghost is always the carnival owner with a sheet over his head.

To their credit, a lot of ghost hunters are outraged by what Bisch and his team are doing.  Sue Nielson, who has traveled to a lot of allegedly haunted places in search of evidence, said, "If we wanted a fake haunting we would stay close to home and wait for the haunted houses to start up in October."

Well-known purveyor of the supernatural Chip Coffey, who has appeared more than once on Paranormal State, was furious.  "If there is reliable, substantive, irrefutable PROOF that such activity is occurring, then it should be made public," Coffey wrote.  "No blind accusations, suppositions or conspiracy theories. PROOF ONLY!"

Which leaves me in the awkward position of disagreeing with the guy who knows hauntings aren't real, and agreeing with a "psychic medium."

Seattle ghost hunter Todd Manoli-Smith concurs.  "Not only is this degrading to the field it’s so disrespectful to the deceased who may actually be trying to reach out."

Well, I don't think my grandma, who died in 1986, honestly cares much about what Bisch is doing.  But I sure as hell do.

There's already so much in the way of background noise in this field, due to human gullibility, misinterpretation of natural occurrences, and autosuggestion that the last thing we need is someone muddying the waters further.  This will make it even harder to determine if there is reliable evidence out there -- not that I think that's very likely.  Most scientists have already given up on researching the paranormal because tomfoolery is so common; all this will do is make the rest of them throw in the towel.

Bisch, for his part, is completely unapologetic. "I can’t apologize... or I guess I could, but I won’t," he says. "I’m an asshole, I know.  But a lovable asshole, though."

Well, Mr. Bisch, you're half right.
Posted by Gordon Bonnet at 1:59 AM