You might have heard that a while back, there was a recall on Toyotas because of a problem with stuck accelerator pedals, a malfunction that cost several lives and had one man unjustly imprisoned for vehicular manslaughter.  Toyota was accused of covering up the problem to avoid the cost of a recall, and ultimately paid out $1.2 billion in repairs and reparations to avoid prosecution.

What you may not know is that the entire problem was caused by...

Yes, HAARP, the High-frequency Active Auroral Research Program, the array of creepy-looking antennas out on the Alaskan tundra that has been blamed for everything from the Fukushima earthquake to Hurricane Katrina.

That's what they want you to believe. 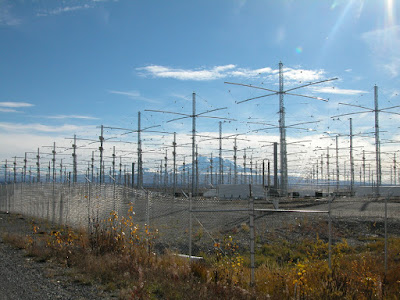 So now here's another thing to lay at the feet of the Illuminati, who are (of course) the ones who operate the research station.  At least, that's the contention of the people over at the David Icke Forum, which acts as some kind of clearinghouse for loonies who don't think that anything happens by chance.


There seems [sic] to be a lot of accidents happening lately because of electronics failure. Many aircraft have fallen out of the sky due to autopilot error, etc.

Trains have collided because switching stations have failed.

Now the Toyota accelerator problem.  Truth is, GM, Ford and Toyota have all had the problem for years.

I suggest that the nanoscale particles of silver released from the Chemtrail program in the form of silver-iodide that allows electrically charged ions to be directed and controlled through HAARP technologies is getting into electronics and reeking [sic] havoc by "tricking" (shorting) electro-mechanical switches.

Well, that's definitely the first thing I think of when I have car problems.  A while back, my 2007 Honda Element, which I love even though it looks kind of like a blue toaster on wheels, started making a weird grinding noise that seemed to come from the rear passenger side.  I immediately took it to my mechanic, Rick.

"Rick," I said, "I think something's wrong with the suspension or brakes back there.  Or, possibly, silver iodide nanoparticles released in the form of chemtrails by an atmospheric monitoring station in Alaska are tricking my car's electro-mechanical parts, thus "reeking havoc."

Turned out it was a stuck brake caliper.  Or at least that's what Rick told me.  There's always the possibility that he might be a secret Illuminati member himself, in which case I've now revealed to Them that I know what they're up to.

So now that I've given myself away, I guess I better watch myself.  Who knows what they'll beam silver iodide into next?  Maybe my computer at school.  Although considering that it already takes twenty minutes just to boot up when I turn it on, maybe that'll make it work better.  Heaven knows nothing else the IT guys have tried has made any difference.  My own contention is that the problem is caused by the fact that my school computer is powered by a single hamster running in a wheel, and that it's as slow as it is because the hamster's kind of pooped out after all these years.

In any case, let me say it as clearly as I know how: HAARP was shut down three years ago.  Any problems you have with your car, up to and including a stuck accelerator, are caused by mechanical failures, not by "silver iodide particles," which you can't "direct and control" using some kind of magic laser beam from space anyhow.  So just relax, and go back to chewing at the straps of your straitjacket, or whatever it was you were doing before.

In any case, I'd better wrap this up, because I've got to get showered, get some breakfast and coffee, and head on out to school.  Turn my computer on, and then wait twenty minutes to see if the hamster is in the mood to run today.
Posted by Gordon Bonnet at 2:13 AM