Well, we survived the apocalypse, or at least the Nibiru-induced one that was supposed to happen two days ago.  Me, I had everything prepared.  Some necessities (coffee, chocolate, scotch), a few precautions (Tylenol, sunscreen, tinfoil hat), and a couple of jugs of water, which I figured would last me until I could figure out how to purify the skeeve out of the water from my pond.

But nothing happened.  I was disappointed.  Given the current situation with Donald Trump and Kim Jong Un, I thought a massive planet swooping by and causing geological and meteorological cataclysms would actually be an improvement.

So naturally, once September 24 rolled around and we were all still here, everyone kind of turned and stared at David Meade, who was the guy who started the whole "September 23 is Doomsday" thing.  Any normal person in that situation would chuckle uncomfortably and say, "Well, fuck it all, I was wrong.  What a goober I am."

But David Meade is not, in any sense of the word, normal.  He said that the problem was, when he said that Nibiru was going to destroy the Earth on September 23, we'd misunderstood him.

What he actually meant was "October 21."

I kid you not.  Instead of retreating in disarray and hiding his face in embarrassment for the next three years, Meade is saying the problem was... us.  He was clear as cut crystal.  A few weeks ago he said, and this is a direct quote, "It is very strange indeed that both the Great Sign of Revelation 12 and the Great Pyramid of Giza both point us to one precise moment in time – September 20 to 23, 2017."

I mean, how stupid of us, right?  It's like one of my students from a few years ago, who when asked why he hadn't turned in a major project, said, "When you said yesterday that it was due tomorrow, I didn't think you meant, like, tomorrow."

That kid has a definite future in the field of apocalypse prediction. 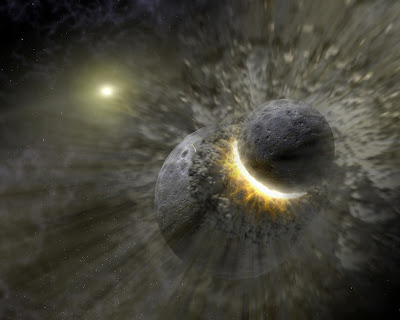 Meade was equally precise.  He said, "I don’t know when the Rapture will happen. I expect nothing to happen in September," which I think we can all agree is pretty much the same as saying, "I expect the world to be destroyed in September."

In October, on the other hand, we are definitely screwed.  "The most recent astronomical cryptography of the imminent judgments approaching begins in the week of October 21, 2017," Meade said.  "The End of Days, in my opinion (and remember we see ‘through a glass darkly’), will begin in the latter part of October of 2017...  It is possible at the end of October we may be about to enter into the seven-year Tribulation period, to be followed by a Millennium of peace."

In this context, "seeing through a glass darkly" is apparently synonymous with "talking out of your ass."

On the other hand, I have to say that the Millennium of Peace sounds kinda nice, especially given the ongoing dick-measuring contest between Rocket Man and Cheeto Boy.  So once again, I'm in the position of hoping that Meade is right, although given his previous track record, I'm not really holding my breath.

Plus, October 21 is five days before my 57th birthday, and it seems unfair that the world will end before I have a chance to get any presents.  I mean, I know everyone isn't gonna die when the apocalypse comes, but I figure that with all the chaos that will ensue, people will have other priorities besides baking me a cake.

So that kind of sucks.  Oh, well, I guess it has to happen at some point, and being that No One Knoweth The Hour With The Possible Exception Of David Meade, it may as well be October 21.  At least I'll have my supply of coffee, chocolate, and scotch ready, in case he's right.
Posted by Gordon Bonnet at 2:06 AM