In recent months, I've done several posts that reference the backfire effect -- the tendency of people to double down on their previous beliefs when challenged, even when shown hard evidence that their views are incorrect.  But of course, this brings up the question, if people tend to plant their feet when you offer counterarguments, how do you change someone's mind?

A quartet of researchers at Cornell University, Chenhao Tan, Vlad Niculae, Cristian Danescu-Niculescu-Mizil, and Lillian Lee, have studied this very question, and presented their findings in a paper called, "Winning Arguments: Interaction Dynamics and Persuasion Strategies in Good-faith Online Discussions."  My wife stumbled onto this study a couple of days ago, and knowing this was right down my alley, forwarded it to me.

What the researchers did was to study patterns on r/ChangeMyView, a subreddit where people post opinions and invite argument.  If someone does succeed in changing the original poster's view, the successful arguer is awarded a ∆ (the Greek letter delta, which in science is used to represent change).  By seeing who was awarded deltas, and analyzing their statements, the researchers were able to determine the characteristics of statements that were the most successful, and the ones that were generally unsuccessful. 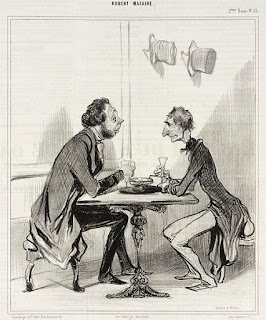 Argument Irresistible, by Robert Macaire (from the magazine Le Charivari, May 1841) [image courtesy of the Wikimedia Commons]

And the results are a fascinating window into how we form, and hold on to, our opinions.  The authors write:


Changing someone's opinion is arguably one of the most important challenges of social interaction.  The underlying process proves difficult to study: it is hard to know how someone's opinions are formed and whether and how someone's views shift. Fortunately, ChangeMyView, an active community on Reddit, provides a platform where users present their own opinions and reasoning, invite others to contest them, and acknowledge when the ensuing discussions change their original views.  In this work, we study these interactions to understand the mechanisms behind persuasion.

We find that persuasive arguments are characterized by interesting patterns of interaction dynamics, such as participant entry-order and degree of back-and-forth exchange.  Furthermore, by comparing similar counterarguments to the same opinion, we show that language factors play an essential role.  In particular, the interplay between the language of the opinion holder and that of the counterargument provides highly predictive cues of persuasiveness. Finally, since even in this favorable setting people may not be persuaded, we investigate the problem of determining whether someone's opinion is susceptible to being changed at all.  For this more difficult task, we show that stylistic choices in how the opinion is expressed carry predictive power.

More simply put, Tan et al. found that it wasn't the content of the argument that determined its success, it was how it was worded.  In particular, they found that the use of calmer words, statements that were serious (i.e. not joking or sarcasm), and arguments that were worded differently from the original statement (i.e. were not simply direct responses to what was said) were the most effective.  Quotes from sources were relatively ineffective, but if you can post a link to a corroborating site, it strengthens your argument.

Another thing that was more likely to increase your success at convincing others was appearing flexible yourself.  Starting out with "You're an idiot if you don't see that..." is a poor opening salvo.  Wording such as "It could be that..." or "It looks like the data might support that..." sounds as if it would be a signal of a weak argument, but in fact, such softer phrasing was much more likely to be persuasive than a full frontal attack.

Even more interesting were the characteristics of the original posts that signaled that the person was persuadable.  The people who were most likely to change their minds, the researchers found, wrote longer posts, included more information and data in the form of lists, included sources, and were more likely to use first-person singular pronouns (I, my) rather than first-person plural (we, our) or third-person impersonal (they, their).

Unsurprising, really; if a person is basing his/her opinion on evidence, I'd expect (s)he would be easier to convince using different evidence.  And the "I" vs. "we" vs. "they" thing also makes some sense; as I posted a couple of weeks ago, despite our technological advances, we remain tribal creatures.  If you engage that in-group-identity module in the brain, it's no wonder that we are more likely to hang on to whatever views allow us to keep our sense of belonging to the tribe.

The Tan et al. research, however, does give us some ideas about how to frame arguments in order to give us the greatest likelihood of success.  Stay calm, don't rant or ridicule.  Give your reasoning, and expand on your own views rather than simply responding to what the other person said.  If you have links or sources, post them.  Especially, show your own willingness to be persuaded.  If the person you're arguing with sees you as reasonable yourself, you're much more likely to be listened to.

Most importantly, don't give up debate as a completely fruitless and frustrating endeavor.  Vlad Niculae, who co-authored the study, found their results to be encouraging.  "If you’ve never visited [ChangeMyView]," Nicolae writes, "the concept that people can debate hot topics without getting into flame wars on the internet might be hard to believe.  Or, if you read a lot of Youtube comments, you might be inclined to believe the backfire effect, and doubt that graceful concession is even possible online.  But a quick trip to this great subreddit will undoubtedly make you a believer."
Posted by Gordon Bonnet at 3:16 AM