As you undoubtedly know, there are people who take the whole exorcism thing with the utmost seriousness.

And given the current chaos in the world, both man-made and natural, it's no wonder that some religious types think that demons are causing it all.  If you're already a believer in supernatural forces (good and bad) controlling things, I suppose it's natural enough that when things get crazy, you're more likely to think that none of it can be due to natural causes.  So according to these folks, demons are directly causing the natural disasters -- and as far as the human-induced ones, it's demons acting through people, directing their actions, that's causing them to do awful things.

Although as far as the natural disasters go, I've heard them attributed to other sources as well.  Noted theologian Kirk Cameron, for example, thinks that Hurricane Irma was sent by god himself in order to teach us "humility, awe, and repentance." He said:


The storm is causing us to remember that it’s God who supplies our life, breath and everything else so that you and I reach out to him...  Remind [us] that God is the blessed controller of all things.  He is the one who gives us peace, security and strength in the midst of the storm and that he uses this to point us to him and to his care for us.

Myself, I doubt that people in the middle of Hurricane Irma are thinking any such thing.  I'm guessing that most of them are trying to figure out how not to have their asses blown into the next time zone, and/or dodging wind-driven projectiles like pieces of houses and, in some cases, entire cars.

Then there's Reverend Lance Wallnau, who has become something of a frequent flier here on Skeptophilia for saying things like god told him the Chicago Cubs were going to lose the World Series because President Obama was from there (the Cubs won),  that Donald Trump's administration has turned into a slow-motion train wreck because he was being cursed by witches, and now that Hurricane Irma will spare Florida if you just pray at it hard enough.  He suggests the following approach:

Well, I'm not seeing much in the way of a wobble at the moment, and in fact, every forecast I see is more and more certain that southern Florida is directly in the bullseye.  Maybe we haven't hit the minimum number of prayers that is acceptable for god to turn the hurricane aside, I dunno.

Anyhow, my point is that we have a great many people who still engage in magical thinking, and attribute everything from one's own personal behavior to large-scale events like earthquakes and hurricanes to the direct intervention by spirits, both good and bad.  So with all this demonic stuff going on, it was only a matter of time before we had an exorcist...

... offering a quantity discount on demon-eviction.

The exorcist in question is Father Cataldo Migliazzo of Palermo, Sicily, who does his group exorcisms on Tuesdays.  People gather, and he exorcises them all at once.  In fact, Migliazzo says the whole thing works better when there are at least eight possessed people there.  No explanation of why, although it does seem to be a somewhat more efficient way to approach it.  Paul Seaburn, who wrote the article I linked for Mysterious Universe, describes what happens at one of these evil entity meet-ups:


[A] woman begins to groan, a couple of people growl and spit and one man vomits.  All are then attended to by other priests who allegedly are also trained exorcists. They hold some of the people down, put crucifixes in their faces and, in one case, throw flour in the face of a woman.

Which seems like an odd thing to do.  Do demons have gluten sensitivity, or something?  In any case, the whole thing seems like a combination of auto-suggestion, superstition, and histrionics to me, but I guess that's unsurprising. 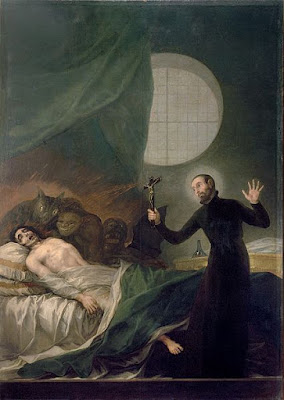 Kind of a troubling progression, that.  Implies that if the psychiatrists can't fix you right away, the only possibility is that you're possessed.  The truth is, many psychological disorders are remarkably intractable, even considering modern medicine and therapy techniques.  The idea of someone who might be schizophrenic going from a psychiatrist to a magician to a priest is actually kind of horrifying.

But Migliazzo thinks he's got the right approach, and apparently his Tuesday demonic socials are quite the rage.  The article didn't mention his success rate, at least in terms of how many people felt better afterwards.  My guess, given what these people are most likely suffering from, any successes would be short-term at best, and end with them becoming repossessed, or whatever the appropriate terminology is.

Myself, I think if you're inclined to growl, spit, or vomit in a public place, you need professional help, and not from a guy in a white robe chanting incantations or throwing flour around.  But I'm not expecting this to change anyone's mind.  If we still have people who think you can pray away a hurricane, all of this exorcism stuff doesn't seem that much crazier.
Posted by Gordon Bonnet at 2:32 AM