If I chose to comment every time a celebrity said something stupid, I'd be doing nothing but responding to idiotic statements all day long.  But every once in a while, a totally unqualified and apparently ignorant person, who is only in the public eye because of some other (sometimes questionable) talent, makes a statement so egregious, so catastrophically dumb, that I just have to say something.

This is the situation I was in when I heard about kickboxer Andrew Tate's pronouncements about depression.  Here's how it started, in his own words: 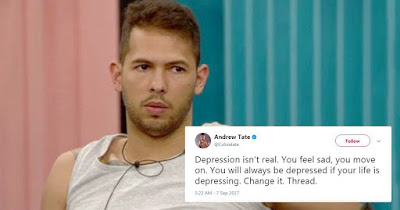 It's seldom that I've seen someone pack so much bullshit in to so few words.

So you can't just "move on."  You can't just "change it."  If it was that simple, there would be no depressed people in the entire world.


Depressed person:  I feel like life's not worth living any more.

So as you can imagine, Tate received quite a well-deserved backlash for his idiotic statement.  But as you might expect from someone who makes a living beating the absolute shit out of other people, this just made him double down on his original position.  Here are his followup comments:
I suppose it's understandable that I became apoplectic with anger reading these comments.  I've struggled with depression my entire adult life.  I was suicidal twice, once when I was 17 and once when I was 20, something few people know about me, even people I knew back then.  I was twice to the point of having a plan to kill myself, plans I abandoned simply out of what I perceived then as cowardice.  I have gone through the gamut of antidepressants, as one after another gave me unacceptable side effects -- complete loss of sex drive, excruciating acid reflux, and (one of them) hypermanic and uncontrollable angry and violent thoughts.  I am now on an antidepressant that works, takes the edge off my depression, and has resulted in no side effects.  Friends and family have told me they see the difference in my overall outlook, energy levels, and approach to life.

So don't tell me "depression isn't real."  Or that it's the same thing as "being sad."  Or that it can be cured with work/exercise/diet. 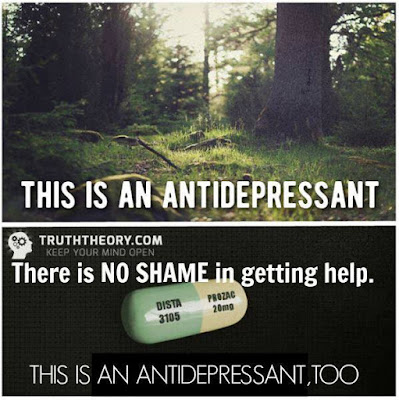 Or that it's circumstantial, that it comes from being "unhappy with life."  I have had depressive episodes when I was in horrible situations, bad relationships, stressful jobs.  I have also had depressive episodes when everything in my life was going wonderfully.  Depression might be easier to deal with when everything around you is good, when you have a support network and little external stress.

But that doesn't make it go away.  Depression is internal, and (very likely) caused by alterations in neurotransmitter levels in the brain.  If it could be cured by walking in the woods, I fucking well would have done that when I was 17 instead of swiping my parents' bottle of sleeping pills, then sitting there on my bed with a handful of them, gazing at them and chiding myself for not having the courage to swallow the whole lot.

I guess it's unreasonable of me to expect that celebrities are going to be any more likely to say smart things than stupid ones.  They run the gamut of intelligence levels just like the rest of us.  But dammit, given their visibility, they have a responsibility to think before they speak, to consider the effects their words will have.  Whether it's reasonable or not, the public listens to them.

And the idea that an athlete like Andrew Tate could have, by his defiant ignorance and his insensitive and incorrect statements, shamed one person out of seeking help for depression is about as reprehensible as anything I can think of.
Posted by Gordon Bonnet at 2:19 AM