I have never been one to post political stuff on social media.

For one thing, I don't think it changes anyone's mind.  Besides the fact that most people simply rah-rah the stuff they already believed and ignore everything else, there's also the tendency of folks to read the headline only -- one study that compared clicks to shares found that 59% of the links shared to social media had not been opened by the person sharing them.

Then there's the fact that most of the time, I just don't want to get into it with people.  That may be surprising coming from someone who writes a blog that is sometimes controversial, occasionally downright incendiary.  But when I get on social media, I'm really not looking for a fight.  I'd much rather see funny memes and pictures of cute puppies than to get into a snarling match over, for example, how, where, and how much we should respect the American flag.

Which is why it was ill-advised of me to post a story from Vice that appeared three days ago, describing a move by Trump administration officials from the Department of Justice to argue in the 2nd Court of Appeals that employers should be able to fire employees for being gay.  The case in question, Zarda v. Altitude Express, originated from an incident in 2010 when skydiving instructor Donald Zarda sued his former employer, alleging that his firing had been based solely on his sexual orientation. 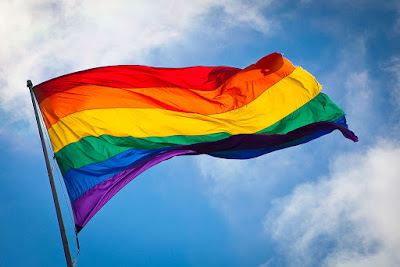 Predictably, I found this appalling, and in a moment of pique, I posted it to Twitter, which auto-posted it to my Facebook.  Most of the responses I got shared my anger at the situation, but one of them said, simply, "Fake news."

And no, she wasn't making a joke.  I know that she's fairly conservative, and this kind of heavy-handed federal government interference in the court system runs pretty counter to the Republican narrative of small government and a hands-off approach to local and state jurisprudence, so I'm guessing that she saw that if it were true, it'd be pretty hypocritical.  (More and more, it's become clear that the current administration wants small government until they want big government, and see no contradiction at all in demanding both, practically at the same time.)

So she just called it "fake news" and forthwith dismissed it.

It's not, in fact, fake news at all.  I know Vice is pretty strongly left-leaning, so it's reasonable to view what they post through that lens; but a five-minute Google search brought me to the amicus curiae brief filed by attorneys for the Department of Justice, and it's exactly what the Vice article described.  Failing that, there were dozens of media sources -- left, center, and right -- that carried the story, and all said substantially the same thing.

(One hopeful note; given how badly DOJ attorney Hashim Mooppan's arguments crashed and burned in front of Appellate Court Judge Rosemary Pooler, it looks likely that the strategy may have backfired rather spectacularly, as an overview of the case in Slate describes.)

So it obviously wasn't "fake news," regardless of your political persuasion or your attitude toward LGBT individuals, discrimination cases, or Vice.  What on earth could prompt someone to say that?  I know the person who made the comment is quite intelligent, articulate, and well-spoken.  We don't agree on much politically, but we've always been pretty cordial to each other despite our differences.

It's a troubling impulse.  Confirmation bias, where you accept claims for which there is little to no evidence because it fits with what you already believed, is as illogical as rejecting claims because they run counter to the talking points from your political party.

In fact, the latter may well be worse, because that immediate, reflexive, knee-jerk rejection of what you want very much not to be true makes you ignore facts that could flag when you've made a mistake -- when you have a belief that, in fact, is not correct.  It insulates you from catching your own errors in judgment, logic, or simple fact.

Which might well be comforting, but it doesn't lead to better understanding.  Me, I prefer to admit I'm wrong and correct the mistake.  As Carl Sagan put it, "It is far better to grasp the universe as it really is than to persist in delusion, however satisfying and reassuring."

And this extends to political arguments which, although they often involve emotions and competing interests, should still be based on actual factual information.  I'll end with another quote, this one from Senator Daniel Patrick Moynihan: "You are entitled to your own opinions, but you are not entitled to your own facts."
Posted by Gordon Bonnet at 1:56 AM