Prompted by my post a few days ago about a visit I made to a haunted pub, wherein I saw almost one ghost, a reader of Skeptophilia sent me a link to the website of KIIS-FM (Los Angeles), where there's a story about a resident whose apartment is plagued by an evil ghostly child...

... and he's telling everyone about new developments in the haunting on Twitter.

The hauntee is one Adam Ellis, who is a cartoonist, and who started out by having bad dreams.  A series of tweets on August 7 mark the beginning of all this.  They're creepy, but more a case for a sleep study than for an exorcist:

Ellis then drew a picture of him (being that he's a cartoonist), which is pretty scary-looking, but in the interest of protecting his right to his own work, I'll simply direct you to the website if you'd like to take a look.

He also recounts a dream of being in a library, and a little girl came up to him and said, "You've seen Dear David, haven't you?"

Ellis replied that yes, he'd seen him.  The girl then told him that you can ask him questions as long as you address him as "Dear David," but you can only ask him two questions.  If you ask him three, he kills you.

All of which remind me of the idiotic "Bloody Mary" game that kids have played for ages, wherein you are supposed to stare at a mirror and say "Bloody Mary" some specific number of times, and in place of your face, you'll see a blood-smeared ghostly woman.

Which, trust me on this, doesn't work worth a damn, because I tried it a couple of times when I was twelve, and all I saw was my own rather unfortunate face looking back at me, which was scary enough. 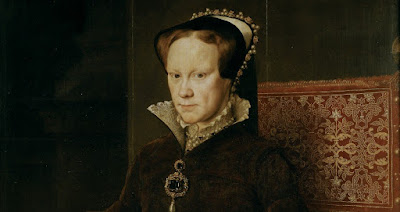 The actual Bloody Mary, who doesn't appear in the mirror either [image courtesy of the Wikimedia Commons]

Anyhow, on the next appearance of Dear David, Ellis followed the little girl's directive, asking how he'd died (an accident in a store), and what had happened that killed him (a heavy shelf was pushed over onto him, probably explaining the huge dent in his skull).  But then Ellis asked a third question (*gasp*), namely who pushed the shelf, and Dear David just glared at him.  Then Ellis remembered the prohibition on asking a third question, and "woke up terrified."

But at least he didn't wake up dead, which is what the little girl predicted.  I guess even spirits can have incorrect information at times.

So by now Ellis was completely freaked out.  He did some research to see if he could find a kid named David who died by being crushed by a shelf, reasoning that such an event would make the news.  He found nothing.  Then, to his relief, he was able to move to a different apartment in the same building, and he thought Dear David didn't know where he'd gone.  All was quiet for a while, until...

... his cats started acting weird.  Every night at midnight, his four cats would gather at the front door and stare for a few minutes.  Then there was the time when one of them was completely calm, then jumped up in terror and ran off, tail bristling.  Ellis's contention is that apparently Dear David is at it again, and the cats are sensing his presence.

Well, I've owned a lot of cats, and I can say with some authority that all cats act weird, pretty much all the time.  We had one cat who did the sudden-leap-and-run thing with great regularity.  Our suspicion was that she had an idea, and that was such an unfamiliar sensation that it startled her.  Another cat would frequently Sing Us The Song Of His People, often at two in the morning.

But Ellis was convinced Dear David was back.  He took a photograph through the peephole of the front door while the cats were staring, and there's a gray blur on it that is either a ghost with a misshapen head or a smudge on the peephole lens.  He ran an audio recorder all night long, and got back some "strange electrical sounds" and something that sounded like a single footstep.  A Polaroid camera generated nothing but photographs that were solid black (reminding me of one of Stephen King's best, the novella The Sun Dog, which you should all read, and if it doesn't scare the absolute shit out of you, you're made of sterner stuff than I am).  He took a video of the green rocking chair, and it moved with no one anywhere near it.  (Again, if you want to see the video, I direct you to the website.)

So Ellis was getting desperate.  He tried smudging the place with sage.  This had no effect except to piss Dear David off even worse.  Ellis had a dream of being dragged through a warehouse by the kid, and woke up with a bruised arm.  He got strings of calls from an "Unknown Caller" -- he let most of them ring, so they show up as "Missed Call."  He did answer one of them and, he heard nothing but "electrical static" for a time -- and then a little voice said, "Hello."

Okay, skeptic though I am, that would have been my cue to piss my pants and then have a stroke.

Further Twitter updates from Ellis describe more feline hijinks, more noises in the middle of the night, and a couple more videos of the green chair moving.  He's still tweeting, @Moby_Dickhead (yeah, I know...) if you want to keep abreast of the latest that Dear David is up to.

A couple of things occur to me, here.  Besides the whole thing about acting weird being cats' raison d'être, we also have the fact that this whole thing has garnered Ellis 413,000 followers on Twitter.  Not bad as a publicity stunt for a budding cartoonist, if that's what it is.  The phone calls can be explained by someone who knew Ellis was claiming to be haunted (which over four hundred thousand people now do), and decided to shake him up a little.  Videos can be faked, and for the rest -- well, we have only his word about it all.  Not that I'm casting aspersions on Ellis's truthfulness, but as Neil deGrasse Tyson said, "As a scientist, if you want me to believe you, you have to have more than 'I saw it.'"

So I'm in the "unconvinced" column.  I would be, of course.  I did follow Ellis on Twitter, to see if anything else interesting comes up.  Until then, my general response is, "... next."

But if tonight I get visited by a pissed-off little kid with a huge, misshapen head, I guess that's no better than I deserve.
Posted by Gordon Bonnet at 2:00 AM