Keeping your eye on the Baal

Illustrating the general principle that loopy ideas are not restricted to one religion, race, or ethnicity, today we have: a rabbi who claims that Donald Trump's presidency was predicted in the Old Testament.

The gentleman's name is Jonathan Cahn, and this isn't his first foray into the lunatic fringe.  Cahn made a name for himself by claiming that 9/11 was foretold by the Prophet Isaiah, and warned that rebuilding on the site of the attack directly contravened god's will, and would lead to us all being the target of the divine "smite" function.  Another time, he went around saying that because America was still doing all sorts of naughty stuff, we were going to get smote again (this seems to be a common theme with him), only this time he picked an actual day, September 13, 2015, on which the aforementioned smiting was supposed to take place.

When September 14, 2015 rolled around, and lo we were all still wandering around unsmot (yes, I know that's not the correct term, but it should be), neither Cahn nor his followers seemed unduly upset by his failure.  In fact, shortly after the non-apocalypse occurred, Cahn appeared on Pat Robertson's television show The 700 Club, and in a moment of unprecedented lucidity, Robertson asked Cahn why the predicted catastrophe didn't happen.

Except that Cahn claimed god had given him an exact date.  A little awkward, that.

It didn't slow Cahn down, however.  In an interview last week on the television program It's Supernatural, Cahn described how Bill Clinton's presidency, Hillary Clinton's candidacy, and Trump's eventual win was simply repeating a pattern from the history of the Israelites:


We are replaying an ancient mystery, where we are right now, and it is amazing and it’s true and it’s real.  In the Bible, there is a king who rises up and he is the first one who pioneers, who is pushing, Baal worship.  And the name is Ahab …  He is the first one to actually champion from the throne Baal worship, which is the offering up of children.  Now, could there be parallel?  Well, there is.  There is a man who rises as president, he is Bill Clinton, he is going to follow the template of Ahab.

Righty-o.  After all, Ahab was defeated in battle by an Assyrian king, Shalmaneser III, reigned for twenty-two years despite that, and eventually was mortally wounded by an Aramean arrow, so I think we can all agree that the parallels to Bill Clinton are obvious. 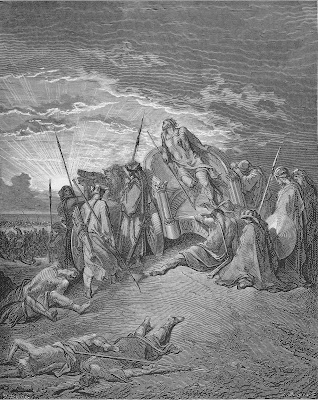 The Death of Ahab (Gustave Doré, 1865) [image courtesy of the Wikimedia Commons]

Such logic apparently doesn't occur to Cahn, who said that this casts Hillary Clinton in the obvious role:

Just as Ahab’s wife, Jezebel, was a champion of Baal worship, so too is Hillary Clinton an advocate of female power and advocate of abortion.

What about Trump, though?  Well, Cahn has that all figured out:


Donald Trump is a modern day version of Jehu, who was raised up by God to become king and to slay Jezebel.  He’s a warrior, he’s a fighter, he fights with everybody.  His name is Jehu…  He’s used by God, but he’s the most unlikely person.

Well, I can't argue with the last bit, anyhow.

So Cahn said that Trump's win was inevitable, because the same pattern was playing out as with Jehu, who in 2 Kings 9:33 tramples Jezebel's mangled body underfoot, as befits a righteous man of god:


When the warrior meets the former queen, the warrior will defeat the former queen and there will be a downfall and that’s exactly what happened.  He wins and Jehu heads to the capital city.  Why does he head to the capital city?  To drain the swamp!  Absolutely.  And Jehu, specifically, is ending Baal worship, which is the offering up of children.  So even Trump puts as his agenda, we want to dismantle this, which leads to the next thing and that is when he goes there, he actually destroys the Temple of Baal in the capital city.  Now the Temple of Baal was built by Ahab, so he starts dismantling the system of killing children.  Well, one of the first things Trump did was sign the the executive orders to try to dismantle it.

And instead of laughing directly into Cahn's face, which is what I would have done, the host of It's Supernatural, Michael Brown, just nodded sagely as if what Cahn had said made perfect sense.

I know people have tried to explain it to me on more than one occasion, but I still can't quite fathom how the Religious Right ended up supporting Trump with such fervor.  I remember the days of Jerry Falwell, Sr., and the founding of the "Moral Majority," which decried the loose morals and general cupidity of secular society.  Here, forty-some-odd years later, we have the same cadre of evangelicals embracing a man who has built his entire life on loose morals and cupidity as if he were the Second Coming of Christ at the very least.

But even by those standards, Rabbi Cahn seems to be taking things a bit far, not to mention twisting reality around like a pretzel in trying to shoehorn modern events into the mold of history.  The problem is, this sort of thing only works when you selectively ignore certain facts and focus on others, are willing to interpret things metaphorically when it suits your purpose, and in general stretch the truth to fit your prior assumptions.

And it must be said that when essayist George Santayana uttered his famous statement that "Those who do not learn from history are doomed to repeat it," I really don't think that's what he had in mind.
Posted by Gordon Bonnet at 2:11 AM