Okay, this "raw foods" fad has gone too far.

Understand that I'm not talking about eating things like raw vegetables.  In general, most of us would benefit from eating more vegetables, raw or cooked, not only because it's healthy, but because growing plants for food has a lower negative impact on the environment than raising animals for food.

But there's a point where people decide that a certain word has positive connotations in all contexts, and that's what's happened with the word "raw" amongst health-food types.  This is why we have people eating meat that's not only raw, but thoroughly decomposed (they call it "high meat" and say it's "probiotic"), and a couple in Australia whose child died of an E. coli infection after drinking raw milk.

So you can see that "raw" doesn't translate to "good for you."  Nor, apparently, even to "something in an uncooked state that is usually eaten cooked." This is why there is now a company that is selling, I kid you not...

The California-based company "Live Water" is now selling, for $15 per 2.5-gallon jug ($11 each if you go for the quantity discount and buy twenty or more), "Fountain of Truth fresh raw spring water."  Which is supposedly better for you than other kinds of water.  Here's the sales pitch from their website:


At the spring head fire agates and 108,000 gallons of water per minute levitate out of a lava tube.  It's been in constant offering at that exact same flow rate, since it was first measured in 1925 until now.  The water is from a time when earth was pristine, and is estimated to have matured below the surface for up to 10,000 years before surfacing.

Imagine its journey as it's flowing through vast networks of crystal lined lava tubes to the surface.  Major science has concluded that their [sic] is a body of water with a larger volume than all our oceans combined in the core of the earth.  This is the earth's way of cleansing water, and offering it back to us with a fresh new start...

The extensive water analysis shows super high levels of natural silica.  Silica is essentially pure liquid crystals.  Silicone [sic] holds information and energy in a unique way, thats [sic] why all our devices run off of them, hence the name silicone valley [sic].  Imagine how it would feel to upgrade your brain's entire operating system to the best computer chips available.  Silica is also known as the beauty mineral, very rarely found in any food or supplements...

In it's [sic] natural cycle water is infinitely chemically and energetically complex.  Water goes down into the soil and becomes the perfect probiotic as it passes through microbes and micro-organisms in the humus.  It picks up bio-available mono atomic elements and minerals that just can't be replicated.  We have done our best to keep it pristine.

First: silica, silicon, and silicone are not the same thing.  Silica is, essentially, glass, so saying it's "pure liquid crystals" is nonsense, as is the idea that consuming silica would "upgrade your brain's entire operating system."  Silicon is an element, atomic number 14, which is a very common atom in most rocks.  Silicone, on the other hand, is a polymer of silicon, oxygen, and organic functional groups, and is used for (among other things) making aquarium cement and breast implants.  (You have to wonder which application gave rise to "Silicone Valley.")

But what's really wildly wrong about this is claiming that there's something unique about water that has been underground for a long time (and underground water deposits don't get anywhere near the core of the Earth, I feel obliged to point out).  Deep aquifer water is often quite pure, but it's no healthier for you than any other pure water source.  And if the water, on its way to the surface, passes through soil and humus and picks up "microbes and micro-organisms," this is, in general, a bad thing.  Not only do unpurified water sources contain such special offers as E. coli, they can also contain Giardia lamblia (giardiasis is basically a month-long bout of severe stomach flu), and in some parts of the world, cholera, cryptosporidiosis, amoebic dystentery, and shigellosis.

All of which can kill you. 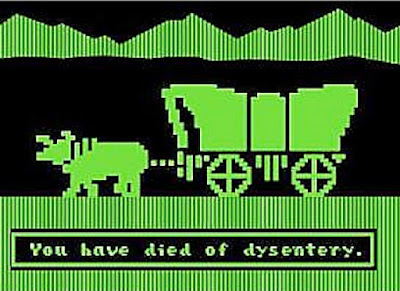 So the bottom line is that gulping down unfiltered, untreated water from your nearby stream is a good way to die, or at least to be awfully unhappy for several weeks.  And I certainly wouldn't trust a company whose webpage is that full of complete, grade-A bullshit, not to mention spelling errors, to adhere to safety standards well enough to be aware of whether their fifteen-buck jugs of water contain pathogens or not.

So I'll just stick with my good old cooked water, thanks very much.  There's a reason why we don't die of horrible diseases at nearly the rates we did a hundred years ago.  And I, for one, am not going to throw caution to the wind just so I can say I drink "raw water."
Posted by Gordon Bonnet at 2:10 AM