The face in the mirror

Like many people, I've at times been in the position of having to interact with narcissists.

I'll not name names, but two, in particular, stand out.  One of them frequently said things like, "Of course, I know I'm wrong all the time," while in point of fact never admitting to being specifically wrong about anything.  Ever.  This individual never budged so much as an inch off any claim, up to and including ones that were demonstrably false and complete matters of opinion like tastes in music and even food.  (If you differed in those opinions, you were "entitled to your opinion even though it's wrong.")  Everything became about being perceived as the most smart, cultured, savvy, and astute person in the room, so every conversation turned into a battle for dominance, unless you refused to play (which, eventually, is what I did).

The second had a different strategy, albeit one that still resulted in the role of Center of the Entire Universe.  For this person, negative attention caused a complete emotional breakdown, which resulted in everyone having to circle the wagons simply to restore order.  Worse still was when something this individual said made me upset; because then, the focus shifted to someone else's needs, which was unacceptable.  My expression of annoyance, anger, or frustration was turned around into my having unreasonable expectations, which precipitated another emotional breakdown, returning me to the role of caregiver and he-who-pours-oil-on-the-waters.

It's a relief that neither of these two are part of my life any more, because being around narcissists is, among other things, absolutely exhausting.  The incessant focus on self means that no one else's needs, and often no one else's opinions, ever get heard.  Worst of all, neither one had any apparent sense of being narcissistic; I heard both expressing, at one time or another, how unfair it was that they didn't have many friends.

Funny how that happens when you don't consider anyone but yourself.

This lack of self-awareness makes narcissism difficult to study, because it's hard to analyze a condition that the patient doesn't know (s)he's got.  But now a team at the University of Graz (Austria), led by psychologist Emanuel Jauk, has not only looked at what it means to be narcissistic -- they've done neuroimaging studies to see what's going on in a narcissist's brain.  The result was a paper that appeared last week in Nature.

"Narcissism is a topic of increasing interest to science and the public, probably because cultural changes in the past decades favor narcissistic behavior," Jauk says.  "Our study was aimed at taking a closer look at the self-image of narcissistic individuals using neuroscience, which might help to unveil its less conscious aspects."

The results were fascinating.  In the authors' words:


Subclinical narcissism is a personality trait with two faces: According to social-cognitive theories it is associated with grandiosity and feelings of superiority, whereas psychodynamic theories emphasize vulnerable aspects like fluctuating self-esteem and emotional conflicts...  While social-cognitive theory would predict that self-relevant processing should be accompanied by brain activity in reward-related areas in narcissistic individuals, psychodynamic theory would suggest that it should be accompanied by activation in regions pointing to negative affect or emotional conflict.  In this study, extreme groups of high and low narcissistic individuals performed a visual self-recognition paradigm during fMRI.  Viewing one’s own face (as compared to faces of friends and strangers) was accompanied by greater activation of the dorsal and ventral anterior cingulate cortex (ACC) in highly narcissistic men.  These results suggest that highly narcissistic men experience greater negative affect or emotional conflict during self-relevant processing and point to vulnerable aspects of subclinical narcissism that might not be apparent in self-report research.

The upshot is that this study suggests narcissism doesn't result in feelings of pleasure when you think of or view yourself; it increases your anxiety.  "Narcissism," Jauk explains, "in terms of an inflated self-view, goes along with negative affect towards the self on an involuntary level."

Which certainly makes sense given my interactions with narcissists.  Above all, neither of the individuals I mentioned seemed all that happy.  It appeared that the returning focus on self came out of insecurity, fear, and anxiety rather than conceit -- that it was more about reassurance than it was about praise.

So the condition itself is a little misnamed, isn't it?  The word "narcissism" comes from the Greek myth of Narcissus, who was a young man whose appearance was so beautiful that he fell in love with a reflection of himself, and couldn't tear his eyes away -- he eventually pined away and died, and the gods took pity on him and turned him into the flower that now bears his name. 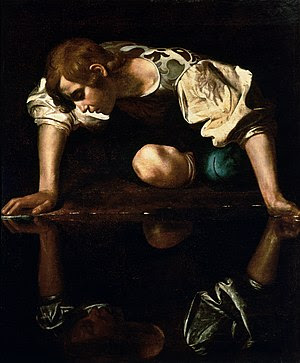 Narcissus by Caravaggio (1598) [image courtesy of the Wikimedia Commons]

The reality is sadder.  Narcissists, apparently, think of themselves not out of self-love, but out of a constant uneasy sense that they aren't actually beautiful, intelligent, competent, or desirable.

Which is kind of a miserable way to live.  Knowing this defuses a lot of the anger I harbor from my experiences with the narcissists I described earlier.  For all of their desperation for attention, at their core they were deeply fearful people.

The authors make reference to an alternate version of the Narcissus myth that is more in line with what true narcissists experience.  They write:


In another prominent version by Pausanias, the myth has a different ending: Narcissus is gazing at himself, when suddenly a leaf falls into the water and distorts the image.  Narcissus is shocked by the ugliness of his mirror image, which ultimately leads him to death.

This more tragic ending is much closer to what the study found:


Considering the two versions of the ancient myth of Narcissus, our results are in favor of the less prominent version, in which Narcissus is shocked to death by the ugliness of his mirror image when a leaf drops into the water.  This myth can be seen to metaphorically reflect the ongoing critical self-monitoring that narcissists display when confronted with self-relevant material, presumably due to a lowered intrinsic coupling between self-representation and self-reward/liking.

Which makes me feel like narcissists are more to be pitied than scorned.
Posted by Gordon Bonnet at 2:45 AM