Last week my wife and I did some hiking along beautiful Skaneateles Lake, and decided to stop for a pint and some chow at Wayside Irish Pub in the village of Elbridge.  The food, beer, and atmosphere were all great, and we also got a chance to check out a place that has a well-established reputation for being haunted. 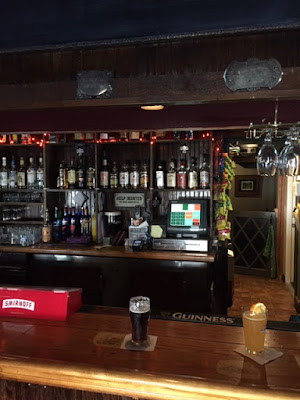 While enjoying our drinks and pub grub, we struck up a conversation with a woman down the bar who was apparently an off-duty bartender (we never quite established what her connection to the pub was except that she works there, but that's what I think she was).  And it turned out that she is quite certain she has had more than one encounter with the pub's spectral residents.

The story is a curious one, if you compare it to other alleged hauntings, for its lack of information.  Most haunted places have a definite story they claim is behind it all; murders and suicides are the most commonly-cited causes of ghostly presences, and any information about the identity of the spirit and how (s)he ended up there is quickly forthcoming, often along with considerable embellishment.

Here, though, the story is that there are two spirits at Wayside, a man and a woman, and nothing more is known about them.  Many people have had spooky experiences there, including some folks that beforehand were staunch disbelievers.  The woman we were chatting with said she's seen wine glasses fly off the rack over the bar, and once on the second floor kept having someone touch her neck when no one was there.  She told me I was welcome to wander around, and recommended checking out the staircase between the first and second floors, which is apparently is one of the most common places for people to have creepy experiences: 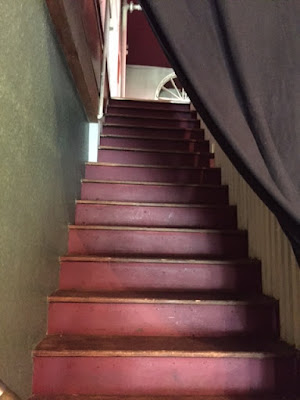 But I didn't see anything or anyone.  I was hoping that when I got home there'd be a translucent figure in the middle of my photo of the staircase, but no such luck.

I was encouraged to go up to the second floor, which was currently not being used, so I did.  It was quite atmospheric.  There's a room done up completely in red: 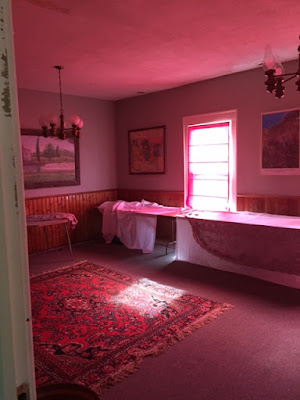 A hallway that certainly seems like it needs a ghost: 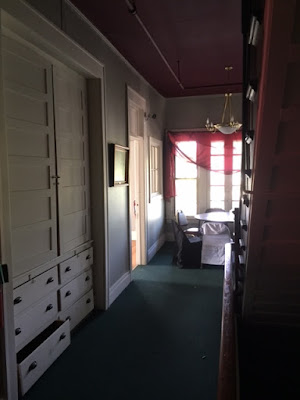 And a banquet room that looks like it should be at the Overlook Hotel: 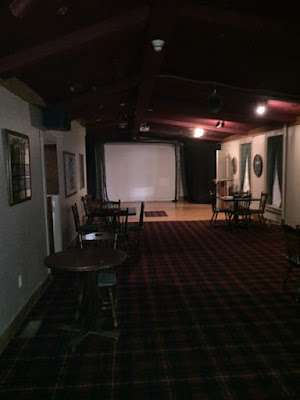 But despite wandering around there by myself for some time (my wife preferred to stay downstairs and continue the conversation with the off-duty bartender), I saw nothing untoward.

What I find most interesting about this is how completely matter-of-fact the woman was in telling us about her experiences.  She told us about the flying glasses as if it was just something that happens sometimes, although she admitted that the touch on the neck "scared her pretty good."  And what struck me was that she had no particular reason to make stuff up; it wasn't (frankly) that good a story, just a couple of strange things with no explanation and no follow-up.  I know eyewitnesses are notoriously unreliable even when they're trying to recall things accurately, but all I can say is that this woman spoke with the ring of truth.

Still, I can't say I was turned into a believer, or anything even close.  I was hoping I'd given the ghosts plenty of opportunity to blow in my ear or untie my shoelaces or whatever, but nothing happened.  Maybe they were napping or something, I dunno, but I sure wish that if there is some odd presence at Wayside Irish Pub, it'd have shown itself.  After all, I really do want to believe, even if so far I haven't been given any particular reason to.

Anyhow, it was worth going.  After a long day's hiking the cold pint was wonderful, and I can definitely recommend the nachos.  If you're ever near Skaneateles and don't mind a twenty minute drive farther north, give it a visit.  Bring along your camera.  Maybe you'll have better luck photographing the pub's ghostly residents than I did.
Posted by Gordon Bonnet at 2:16 AM