Here at Skeptophilia, I try not to focus day after day on people who believe crazy stuff.  After all, loony ideas are kind of a dime a dozen, and loony people just as common, so at some point this kind of thing starts seeming like low-hanging fruit.

But every once in a while, I run into an idea so loony that it almost seems kind of... inspired.  Which is why today we're going to discuss: how the Freemasons are altering your DNA using a musical pitch to make you hate Donald Trump.

This may sound like a ham-handed attempt at satire, but sadly, it appears to be real.  According to a link sent to me by a long-time loyal reader of Skeptophilia, this is the claim of one Mark Taylor, self-styled "firefighter prophet," who has this to say about his own credentials:


I am no longer simply Mark Taylor, but also Shakina Kami, a name that translates from a combination of the African and Indian languages into “Beautiful One Whose Desires Are Fulfilled, and in Whose Life the Lord Dwells with the Divine Wind of Providence.”

So I think we can all agree that sounds pretty authoritative, even though I have to admit that I speak neither "African" nor "Indian."  Be that as it may, Taylor/Kami used his Divine Winds of Providence to write a book with the somewhat cumbersome title The Trump Prophecies: The Astonishing True Story Of The Man Who Saw Tomorrow… And What He Says Is Coming Next, wherein we find out that not only is Trump the Anointed One of God, Taylor himself had a vision in which he saw how Trump would win, and how this would be a tremendous defeat to the Forces of Darkness.  It's filled with passages such as the following:


The Spirit of God says, ‘America, get ready, for I AM choosing from the top of the cream, for I AM putting together America’s dream team, from the president and his administration, to judges and congress to ease America’s frustrations!’  The Spirit of God says, ‘Rise up, My Army, and get in the fight…  Rise up! stomp the enemy’s head with bliss; send the enemy back to Hell and into the abyss.’

All I can say is that even if we're being ruled by the Dream Team Cream, lately the news has made me want to Scream.  Overall, I can't say my frustrations have been eased much.  In fact, most of the time I feel like I need to double my anti-anxiety meds just to make it through the day.

Anyhow, I guess Taylor et al. didn't stomp the enemy's head blissfully enough, because the Bad Guys are now fighting back.  According to an interview he gave on right wing activist Sheila Zilinsky's radio program, Pass the Salt Live, last week, we are now being bombarded by "frequencies" designed to alter our DNA:


I believe what happened on November 8th is that the enemy has sent out a frequency, if you will -- and if you'll remember, when we did your show on "frequency" we literally got shut down and had to start over again... those who are tapped into this frequency, and it agitated and took control of those who had their DNA that was turned over to the enemy.  And that's what's happening.  The Illuminati, the Freemasons, their main goal is to change the DNA of man, and they're doing it through these frequencies, whether it's the bombardment of the news media, whether it's rock and roll music, I mean we could go on and on with these frequencies as we've talked about before.  So you need to surround yourself with the good news, not the apocalyptic messages right now.  Not to say that things aren't going to happen, because we're always going to have fires and earthquakes and hurricanes.  It's not the apocalyptic message that everyone's talking about.

I'm being bombarded by emails from Christians right now, saying, "Look, I support Trump.  But everybody in my family has isolated me.  Everybody in my church is not talking to me."  It's because their DNA is being controlled by the enemy.  By broadcasting the news media, the audio part of it, at 440.  That's why when you watch the news media you get agitated.  It creates fear, it creates panic.  And this is what is going on in the church.  The body of Christ has got to stop being vulnerable to this stuff.  You've got to stop listening to the mainstream news media.  Look, if I want to know what's happening, I'll go to Fox's website to catch the headlines...  That's not being broadcast, where I'm hearing it in a frequency or anything like that.  See, the thing about that 440 hertz is that it will damage your body organs.  That's another reason why people are so sick.  It changes your DNA.  That's the goal of the Freemasons, the Illuminati.  They want you to be part of that Illuminati bloodline.

Okay, I have only one question about all of this, which is:

A news broadcast sent out solely at a frequency of 440 hertz wouldn't be damaging so much as it would be annoying, because it would be a single continuous musical tone at A above middle C, which would make it a little hard to glean information from, good or bad.  Also, if 440 hertz caused DNA to change, orchestra members would undergo horrifying mutations every time the oboe plays an A so the rest of the musicians can tune their instruments.

Which could be kind of entertaining, even if it wouldn't really be conducive to a good performance afterwards.

Also, you really get the impression here that, besides the fact that Mark Taylor is nuttier than squirrel shit, he also has no concept of how DNA works.

Or maybe I've just listened to too many symphonies in my life, and I'm now part of the "Illuminati bloodline."  Which, now that I come to think of it, would be kind of cool, especially if it came with evil superpowers.

But I'm guessing that's not really all that likely, because here I sit, drinking coffee and trying to reboot my brain with only marginal success thus far, instead of cackling maniacally while shooting lightning from my fingertips, which would be a lot more fun. 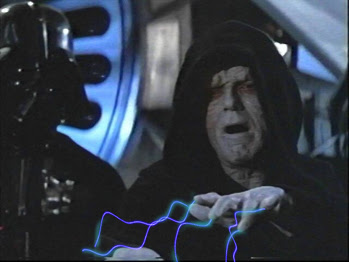 The real problem, of course, is that once you start looking into this stuff, you very quickly go down the Bottomless Rabbit Hole of Lunacy, and start watching videos with names like "432hz vs 440hz pt 2 Nazi Fluoride How Illuminati 440hz Music Poison Pineal Gland," which not only has to do with Nazis, fluoride, the pineal gland, and "frequencies," also involves astrology, the All-Seeing Eye, Jim Morrison, Jimi Hendrix, Janis Joplin, John Lennon, Elvis Presley, the year 1776, and pacts with the devil.  It ends by asking, "Did they deceive the mass and Themselves while they didn't knew IT?", which I think is a pretty good question.  After watching all of this stuff, I'm not sure what I knew anymore, myself.

So many thanks to the loyal reader who sent me the link, which has left me feeling like I need a double scotch even though it's only eight in the morning.  I suppose I should buck up, as I have a big day ahead, retuning all of my musical instruments to 432 hertz so that my pineal gland doesn't freeze up and turn me into a Trump-hating Nazi Freemason.  I hate it when that happens.
Posted by Gordon Bonnet at 2:32 AM