One thing that seems to be a characteristic of Americans, especially American men, is their love of loud noises and blowing stuff up.

I share this odd fascination myself, although in the interest of honesty I must admit that it isn't to the extent of a lot of guys.  I like fireworks, and I can remember as a kid spending many hours messing with firecrackers, bottle rockets, Roman candles, and so on.  (For the record, yes, I still have all of my digits attached and in their original locations.)  I don't know if you heard about the mishap in San Diego back on the Fourth of July in 2012, where eighteen minutes worth of expensive fireworks all went off in about twenty seconds because of a computer screw-up.  It was caught on video (of course), and I think I've watched it maybe a dozen times.

Explosions never get old.  And for some people, they seem to be the answer to everything.

So I guess it's only natural that when hurricanes threaten, somebody comes up with the solution of shooting something at them.  The first crew of rocket scientists who thought this would be a swell idea just thought of firing away at the hurricane with ordinary guns, neglecting two very important facts:
This prompted news agencies to diagram what could happen if you fire a gun into a hurricane: 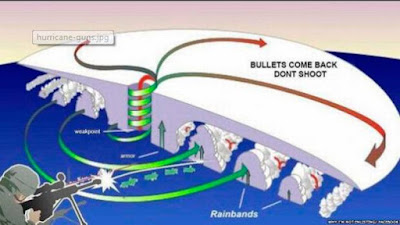 So this brings "pissing into the wind" to an entirely new level.

Not to be outdone, another bunch of nimrods came up with an even better (i.e. more violent, with bigger explosions) solution; when a hurricane heads toward the U.S., you nuke the fucker.

I'm not making this up.  Apparently enough people were suggesting, seriously, that the way to deal with Hurricane Irma was to detonate a nuclear bomb in the middle of it, that NOAA felt obliged to issue an official statement about why this would be a bad idea.

The person chosen to respond, probably by drawing the short straw, was staff meteorologist Chris Landsea.  Which brings up an important point; isn't "Landsea" the perfect name for a meteorologist?  I mean, with a surname like that, it's hard to think of what other field he could have gone into.  It reminds me of a dentist in my hometown when I was a kid, whose name was "Dr. Pulliam."  You have to wonder how many people end up in professions that match their names.  Like this guy: 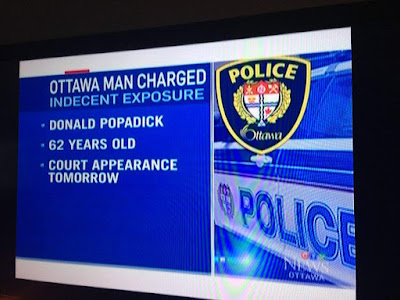 And this candidate for District Attorney: 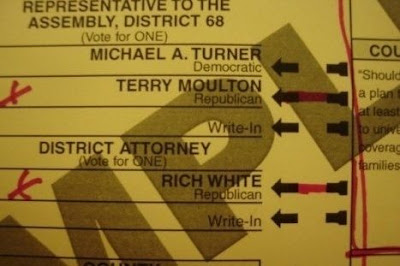 Anyhow, Chris Landsea was pretty unequivocal about using nukes to take out hurricanes.  "[A nuclear explosion] doesn't raise the barometric pressure after the shock has passed because barometric pressure in the atmosphere reflects the weight of the air above the ground," Landsea said.  "To change a Category 5 hurricane into a Category 2 hurricane, you would have to add about a half ton of air for each square meter inside the eye, or a total of a bit more than half a billion tons for a twenty-kilometer-radius eye.  It's difficult to envision a practical way of moving that much air around."

And that's not the only problem.  An even bigger deal is that hurricanes are way more powerful than nuclear weapons, if you consider the energy expenditure.  "The main difficulty with using explosives to modify hurricanes is the amount of energy required," Landsea said.  "A fully developed hurricane can release heat energy at a rate of 5 to 20 x 10^13 watts and converts less than ten per cent of the heat into the mechanical energy of the wind. The heat release is equivalent to a ten-megaton nuclear bomb exploding every twenty minutes."

So yeah, you can shout "'Murika!" all you want, but Hurricane Irma could kick our ass.  It may not be a bad thing; a reality check about our actual place in the hierarchy of nature could remind us that we are,  honestly, way less powerful than nature.  An object lesson that the folks who think we can tinker around with atmospheric carbon dioxide levels with impunity might want to keep in mind.

Apparently Landsea's statement generated another flurry of suggestions of nuking hurricanes as they develop, before they get superpowerful.  The general upshot is that when Landsea rained on their parade, these people shuffled their feet and said, "Awww, c'mon!  Can't we nuke anything?"  But NOAA was unequivocal on that point, too.  Nuking tropical depressions as they form wouldn't work not merely because only a small number of depressions become dangerous hurricanes, but because you're still dealing with an unpredictable natural force that isn't going to settle down just because you decided to bomb the shit out of it.

So there you are.  The latest suggestion for controlling the weather, from people who failed ninth grade Earth Science.  As for me, I've got to get going.  My classes are starting the chapter on basic chemistry today, and I need to get to school to see if I can swing a way to do a demonstration for my class called the "Barking Dog Reaction."  That's the ticket.  Things going boom.  I like it.
Posted by Gordon Bonnet at 2:05 AM