I have written daily on this blog for years now, and I still run into crazies that I haven't heard of before.  I guess this isn't that surprising, given that humanity seems to produce an unending supply.  But given the amount of time I spend weekly perusing the world of woo-woo, it always comes as a little bit of a shock when I find a new one.

This week it was John Hogue, who a student of mine asked about, in the context of, "Wait till you see what this loony is saying."  Hogue is a big fan of "Nostradamus," noted 16th century wingnut and erstwhile prophet, who achieved fame for writing literally thousands of quatrains of bizarre predictions. 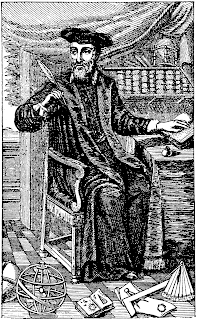 Hogue believes that just about everything you can think of was predicted by Nostradamus. Let's start with his claim that Nostradamus predicted Saddam Hussein's rise and fall, only (because being a prophet and all, you can't just say things straight out) he called Saddam "Mabus."  How does Hogue know that Saddam is Mabus?  Let's have it in his own words:

Here, for your review are the two core quatrain prophecies about Mabus, the Third Antichrist, indexed 2 Q62 and 8 Q77 in Nostradamus’ prophetic masterpiece Les Propheties, initially published in serialized form between the years 1555 and 1560:

Mabus will soon die, then will come,
A horrible unraveling of people and animals,
At once one will see vengeance,
One hundred powers, thirst, famine, when the comet will pass.

Let us go through the milestones that [show] Saddam... to be candidate number one...
Being a dead candidate is the first and dubious milestone... Saddam was hanged at the 30 December 2006...

[Saddam's name] can be found in the code name Mabus.  Saddam backwards spells maddas=mabbas=mabas.  Replace one redundant a and you get Mabus.

Or if you don't like that solution, maybe Mabus is Osama bin Laden, whom Hogue refers to as "Usama" for reasons that become obvious pretty quickly:

Usama mixed around get [sic] us maaus.  Take the b from bin Laden. Replace the redundant a and you get Mabus.

If you take my first name, Gordon, and rearrange it, you get "drogon."  Replace the "o" with an "a," because after all there are two "o"s anyway, and you clearly don't need both of them.  You can get the "a" from the leftover one Hogue had by removing the redundant "a" in "maaus."  Then you get "dragon."  If you take my middle name (Paul) and my last name, and rearrange the letters, you get "a noble punt."

So this clearly means that a dragon is about to attack the United States, but I'm going to kick its ass.

Basically, if you take passages at random, and mess around with them, and there are no rules about how you do this, you can prove whatever you want.  Plus, all of the "prophecies" that Nostradamus wrote are vague and weird enough without any linguistic origami to help you out.  They make obscure historical and mythical allusions that, if you're a little creative, can be interpreted to mean damn near anything. Here's one I picked at random (Century X, Quatrain 71):

What does that mean?  Beats the hell out of me.  I'm guessing that you could apply it to a variety of situations, as long as you were willing to interpret it loosely and let the images stand for whatever you want them to.  Me, I think it has to do with the upcoming apocalypse on October 21.  Oh, and that climate change is a lie, because the sea is going to freeze.  I'm sure that the Planet Nibiru and global conspiracies are somehow involved, too.

What I find amazing is that there are literally thousands of websites, books, and films out there that claim to give the correct interpretation of Nostradamus' wacky poetry.  Some of them take a religious bent, and try to tie them into scripture, especially the Book of Revelation; some try to link them to historical events, an especially popular one being World War II; others, even further off the deep end, try to use them to predict future catastrophes.  These last at least put the writers on safer ground, because you can't accuse someone being wrong if they're using arcane poetry to make guesses about things that haven't happened yet.

In any case, I'm doubtful that Nostradamus knew anything about Saddam Hussein, any more than he predicted World War II, the dropping of the atomic bomb on Hiroshima, the assassination of JFK, or any of the hundreds of other things he's alleged to have forecast.  All we have here is once again, people taking vague language and jamming it into the mold of their own preconceived notions of what it means.  About John Hogue himself, I'm reminded of the words of the Roman writer Cicero, who said, "I don't know how two augurs can look each other in the face while passing in the street without laughing out loud."
Posted by Gordon Bonnet at 2:16 AM